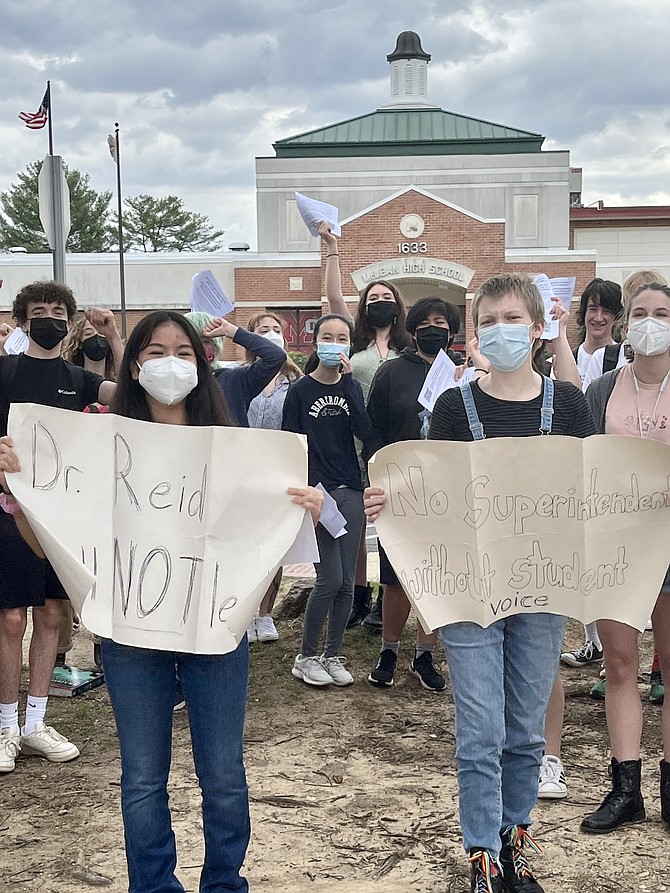 On April 14, 250 high school students in Fairfax County staged walkouts and protests at multiple schools, including Westfield, McLean, Oakton, and Mount Vernon high schools organized by the  Pride Liberation Project. It is a student-led coalition of queer and allied FCPS students who advocate for the rights of LGBTQIA students. 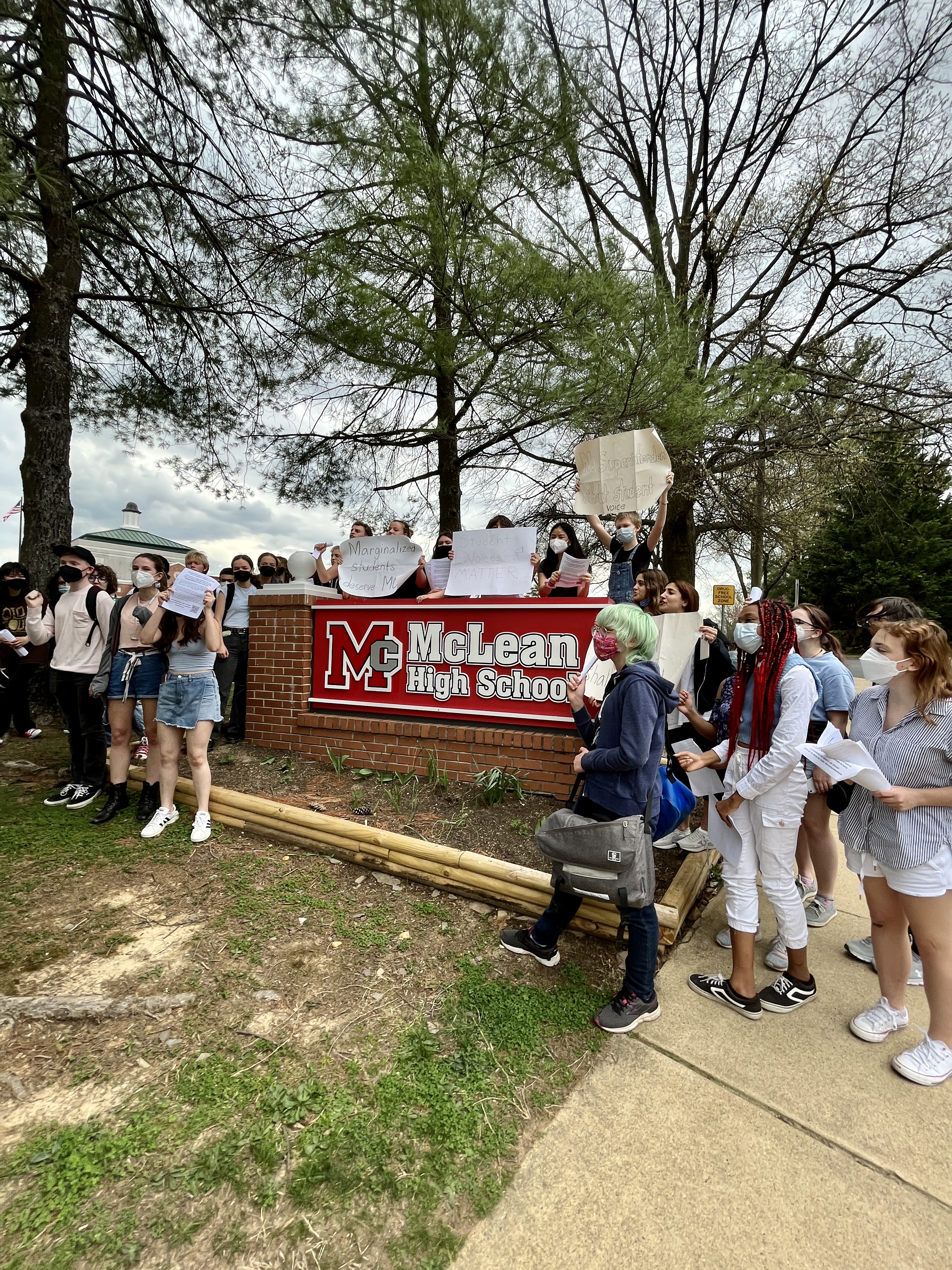 Students stage walk out protests at McLean, Westfield and Mount Vernon High Schools, among others

Sierra Balleisen, a McLean High School student protestor, said, “I'm here as a neurodivergent student trying to advocate for our rights and allow the students to have a voice in the new superintendent … There should be nothing about us without us.”

According to Pride Liberation Projects’s  Student Statement Supporting NAACP Letter Regarding Superintendent Search, outreach to the community during the search for new superintendents was limited to fifteen days in January. The only outreach to students was an 11-student panel, chosen through a process not revealed to the general student body. “Though these 11 students are likely immensely qualified, they nonetheless cannot represent the views of a 180,000+ student body that attends 198 schools and centers, speaks 200+ languages, and belongs to a diverse range of socioeconomic backgrounds,” said PLP’s statement.

“The need to hear our voices is more important than ever given the various concerns that have emerged over Dr. Reid's approach to student journalism, neurodivergent students, and students of color," protest organizer and Westfield student Aaryan Rawal said.

Reid and Dr. Cheryl Logan, the superintendent of Omaha Public Schools, had been the two finalists for the FCPS superintendent position. A select community panel met with the two candidates on March 28 and 29.

The panel did not include representatives from the Fairfax NAACP or the Pride Liberation Project. The Fairfax NAACP said that it had been “inundated with messages from whistleblowers (serving on the panel) sharing names and data points as well as overall impressions.”

The Fairfax NAACP said that many panelists were “shocked” that a superintendent (Reid) with only a $400 million budget vs. a $2.7 billion FCPS budget, 2,100 employees vs. 25,000 FCPS employees, and achievement gaps despite relatively high wealth and low poverty could have ended up as one of FCPS's final two candidates.

“With so much at stake, we have determined to share this information with the public,” the Fairfax NAACP said.

The Omaha World-Herald reported on April 15 that Dr. Cheryl Logan informed the Omaha Public School board a week before that she had taken her name out of the FCPS superintendent search. Logan's announcement and the NAACP's release occurred on the same day. With Logan’s withdrawal, Reid was now the leading candidate to succeed Dr. Scott Brabrand, the current FCPS Superintendent.

In the 72 hours leading up to the protests and the school board's pending confirmation vote for Reid, the Pride Liberation Project circulated amongst FCPS high school students its petition addressed to FCPS school board members and GR Consulting. “FCPS cannot select a new Superintendent without thoroughly reaching out to students and addressing concerns,” the student group said.

In their petition, PLP requested that “FCPS conduct a public audit of the Superintendent search process and publicly release clear indications that the Superintendent was chosen for demonstrating success in key areas, including community outreach, closing achievement and opportunity gaps, mental health access for all students, and equitable school experiences for vulnerable student populations, such as neurodivergent, people of color, LGBTQIA+, and English language learner students.”

Westfield student Aaryan Rawal reported that over 500 students signed the petition requesting that GR Consulting and the school board do more to reach out to students during the final stages of the superintendent search. PLP proposed holding student town hall meetings during high school free (advisory) time to allow students to voice concerns and provide board members with “important context.”

Jaya Nachnani was the primary organizer of the Mount Vernon High School protest. On April 14, she tweeted that they had two protest goals: “to get more time to investigate the allegations made against Reid and raise concerns regarding the difference in demographics between the counties (FCPS and Northshore school districts).”

FCPS has an enrollment nearly ten times larger than Northshore (20K v.180K students). According to a demographic and program comparison released by the Fairfax County NAACP on  April 9, 2022,  FCPS has five times the percentage of Black students, slightly more than twice the percentage of Hispanic students, more than twice the percentage of students eligible for free and reduced priced meals, and nearly three times the number of English Language Learners. The differences in actual numbers of students in each category are vast.

In one of its final attempts to be heard, Pride Liberation Project issued an April 14 release, stating: “Don’t confirm Dr. Reid or any other candidate on Thursday, April 14 … until students and community members are allowed to participate in the process through student town-halls in each of FCPS’ regions during advisory periods, along with community panels open to any organization.”

On the evening of April 14, student Aaryan Rawal said, as the Fairfax County School Board was preparing to vote on Reid's confirmation. that PLP sent its petition to school board members and GR Consulting that evening.

When asked what response they received, Rawal said that the only response from FCPS was a call from someone in the division's communications office who "pressured us not to criticize Dr. Reid until after tonight's meeting."

Westfield student Aaryan Rawal followed up in a second email, "We are incredibly disappointed that the school board ignored the voices of student protestors, petitioners, and the countless others who were simply never given the needed information by our schools to participate in this process … We will continue to organize and advocate for our community ... It's up to the county to acknowledge our voice. We sincerely hope Dr. Reid proves us wrong."

Fairfax County NAACP tweeted, “We are appalled that despite community outcry, the @fcpsnews SB has chosen to plow through a superintendent vote tonight. Revelations regarding Special Education practices make the Northshore candidate (Reid) even less suitable than we knew.”

The following day, Jaya Nachnani, a student protestor at Mount Vernon High School, tweeted, “Today we met with Dr. Reid and members of the school board. Here’s what I have to say: this entire protest is not against Dr. Reid (but) rather FCPS. FCPS chose not to listen to the students and the teachers, and I’m highly disappointed.”