On the Horns of the Dilemma in Arlington
Votes

On the Horns of the Dilemma in Arlington

Is deer management needed? What would it entail? 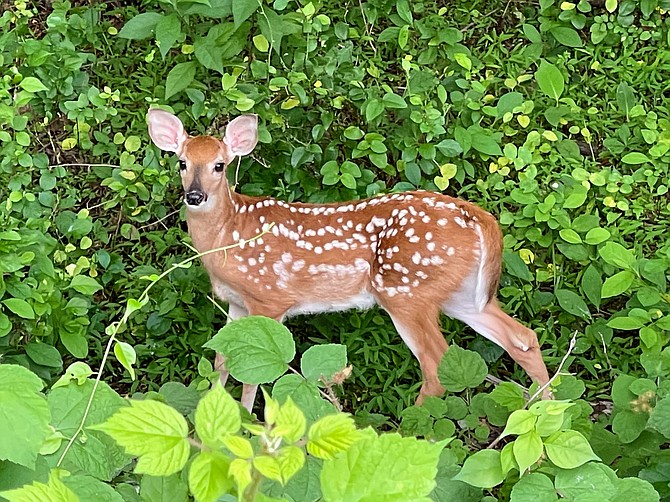 White-tailed deer have been a source of concern and contention in Arlington County for quite some time. For more than a year, there has been intense dialogue among different community groups over whether or not the current deer population in Arlington poses a significant ecological problem.

While some residents – like members of the Animal Welfare League of Arlington (AWLA), for example – don’t see the numbers of white-tailed deer in the area as an issue, others see droves of deer as a multidimensional threat to the local environment. These people – like members of the Arlington Regional Master Naturalists (ARMN) – argue that the overpopulation of white-tailed deer results in serious, irreversible damage to Arlington’s natural areas.

“As Master Naturalists, our focus is the natural areas,” said Steve Young, Master Naturalist and Arlington Park Steward. “The question isn’t whether or not the deer belong here; we understand that they aren’t an invasive species. It’s about whether or not they are out of balance and are harming natural areas. There are plenty of indicators that there is an overpopulation of deer and it is having negative impacts on the environment, other species, people, and even deer themselves.”

The local chapter works closely with the Arlington County Department of Parks and Recreation and was one of the drivers behind the Department of Parks’ 2021 deer assessment study, “Arlington County Deer Survey and Next Steps.” This was a study that did, in fact, state that the number of deer in Arlington “likely exceeds” carrying capacity.  See previous coverage at http://www.connectionnewspapers.com/news/2022/apr/20/oh-deer-just-how-big-problem-are-deer-arlington/

The Animal Welfare League of Arlington, which is a government-contracted organization that provides animal shelter, animal control, and educational services across the county, disagreed with the survey’s conclusions and maintains that deer do not have an unmanageable, negative impact on Arlington’s natural lands.

All the while, following the survey, the county wasn’t quite ready to take any action, nothing that would impact the number of deer in the area, anyway.

This summer, the Department of Parks and Recreation announced that Arlington County would pursue further evaluation of deer in county-owned parks. And in September 2022 – a full year after releasing the results of the April 2021 drone survey – Arlington County officially hired White Buffalo, Inc., a wildlife management and research organization with experience analyzing deer around the region.

The current study is different than the drone survey, though. While the purpose of last year’s evaluation was to count the number of deer in specific areas of Arlington, White Buffalo’s study is focused on the impact the deer have on the land.

“The drone survey only captured the amount and locations of deer,” Alonso Abugattas, Natural Resources Manager for Arlington County Parks, said. “This second study provides direct observation and measurement of potential deer impacts that couldn’t be captured by our initial aerial survey. White Buffalo Inc. will be looking at the overall deer browse and whether it is ecologically sustainable. They will document species affected by deer browse as well as the height of woody plants and damage to woody plants as an indicator of browse intensity.”

Deer browse occurs when deer feed on the leaves, soft shoots, flowers, new growth, or fruits and seeds of high-growing, generally woody plants such as shrubs and sapling trees.

Abugattas added that White Buffalo will also be looking at other metrics, too, whatever it takes to paint a full picture of white-tailed deer in Arlington County-owned parks.

The White Buffalo team certainly has their work cut out for them. Unlike the contractors behind last year’s drone study, White Buffalo will be conducting research for months.

“They are now compiling field data, interviews, literature review, and regional benchmarking, to draft an initial report,” Abugattas said. “This report will inform the public engagement portion of this project, which should occur during the first quarter of calendar year 2023.”

Then, after getting community feedback, White Buffalo will provide a comprehensive report on Virginia deer for Arlington County.

“Based on what they hear from staff and community, White Buffalo will provide a written report that may include recommended short- and long-term strategies to achieve stewardship goals and ecological carrying capacity in designated natural lands in county parks,” Abugattas said. “Recommendations may differ by location and level of impact.”

Arlington County insists that it will take both White Buffalo’s findings and the community’s response in consideration when it comes to decision-making time.

“Public feedback will be one of many factors that the county will consider when deciding whether to actively manage deer and what management strategy to pursue,” Abugattas said.

And this opportunity for collaboration with the county is exactly what the AWLA and its allies have been hoping for, according to Jennifer Toussaint, Chief of Animal Control at the AWLA.

“My greatest hope is that all of the stakeholders involved are given equal opportunity for input and outreach,” Toussaint said. “Additionally, we would hope for a robust community engagement plan that would be inclusive and broad – one that offered humane varied solutions by neighborhood or region of the county instead of issuing a blanketed policy.”

“The county has never denied anything we’ve said about the damage that deer are causing," Bill Browning, ARMN Master Naturalist and Arlington Park Steward, said. “To say we are satisfied with the pace of things, no. But it is what it is. The urgency is the issue here. The first contractor, which was done over a year ago, called for an aggressive deer management plan. And here we are in Arlington continuing to study it. We’ve got to show a little more urgency than we are.”

On the other hand, the AWLA, which provides the county’s animal control services, isn’t even convinced that overpopulation exists. The organization appreciates that the county is doing its due diligence before taking any official action to reduce the number of deer in ways AWLA would see as inhumane.

“I greatly appreciate the county's thorough assessment on all matters, including considerations for if deer are having an impact on natural preservation areas and what concrete steps could be taken to minimize the effects,” Toussaint said. “We support Arlington County adopting a practical, humane, and sustainable deer management plan. As the county’s animal resource center, we will continue to work with anyone in the community to create humane deer management solutions that keep our citizens, ecosystem, and wildlife healthy and safe.”

Unfortunately, though, according to the master naturalists, the longer the county and the Department of Parks waits to take action, the worse the situation gets.

“It’s clear that we don’t share a sense of urgency with Arlington County about addressing this,” Marion Jordan, Master Naturalist and former Arlington Regional Master Naturalists president, said. “The deer are still here, they are still increasing. Everything we talked about after the last survey is still present. The county is going at a very slow pace. While we can’t influence the pace of it, we can say how important it is to keep moving forward to take steps to protect our forests.”

The ARMN team emphasized that they don’t see a problem with white-tailed deer in and of themselves, just when they are out of balance with the environment like they are now.

“We are animal lovers,” Browning said of the ARMN. “I love deer, but I also love song birds, snakes, and all these other animals are suffering, dying, and not able to raise their young because their homes are being taken away by deer. Controlling the deer population is beneficial for other animals – including deer themselves. There is a huge disease problem in the herd that is coming to this area called chronic wasting disease that is spread by saliva. It was in just a couple Virginia counties two years ago, and now it’s spread to ten.”

Young said that overpopulation is terrible for the healthy survival of deer in other ways, too.

“A lot of deer are dying out there and many appear to be dying because of vehicle collisions, which I would argue is an indicator of overpopulation,” Young said. “There is data, even coming from the AWLA, that an increasing number of deer are dying in vehicular accidents.”

The ARMN has noted that Arlington residents across the county have noticed more and more the damage that deer are doing on their own property.

“There is evidence everywhere of deer overpopulation and of its damaging effects.” Young said. “Over the last five years, it’s undeniable that deer are becoming more habituated around people. A deer’s natural reaction should be fear and avoidance, but I’ve seen more and more deer unafraid. If you have an overpopulation of deer, that’s when they start this habituation. They are significantly sized animals that can pose unintentional threat to people – children, runners, cyclists, and so on. The way deer are now, it’s just not normal behavior.”

“The county is so concerned about the reaction from the community that they are moving so slowly,” Young said. “They are expecting this to continue to be controversial and if the county were to propose implementing a deer management program, there would be a lot of pushback. After all, this whole time, you’ve had AWLA is saying there isn’t a problem. They are naturally going to feel like they need evidence to support decision-making.”

Jordan agreed, noting that there will be no shortage of resources for Arlington County to make the right decision when it comes to white-tailed deer management.

“By hiring not one but two contractors, Arlington County is taking extraordinary measures to make sure they have outside experts providing what they need to inform decision-makers,” she said. “I see this as trying to be so careful so that they can gather enough information to explain to the public what they need to do.”

Jordan also encourages Arlington County to look strictly at scientifically-based facts – and not to emotional appeals or unsupported claims – when making deer-related decisions.

“As this conversation moves forward, we need to explore why people are throwing things – facts, statistics that lack the full truth – out there,” Jordan said. “In general, we need to have a further examination of the statements being thrown out there, and digest them for what they are.”

In response to assumptions that the county isn’t being decisive or making swift moves in efforts to please everyone, Abugattas said it’s just not that simple.

“Every jurisdiction must determine the appropriate amount of data required to make deer management decisions,” he said. “This second study provides direct observation and measurement of potential deer impacts that couldn’t be captured by our initial aerial survey. It also leverages the deep subject matter expertise of established deer management researchers and consultants. The two studies complement one another to provide a more robust dataset to inform management decisions. While some decision makers may be comfortable acting on the aerial survey data alone, others will appreciate the more complete picture provided by this complementary study.”

Abugattas added that the county is prepared to make deer-related decisions that are in the best interest of Arlington and its citizens – but reiterated that it won’t be without involving Arlingtonians.

“The county and DPR will be prepared to implement the management strategy that is determined to be the best course of action for Arlington,” Abugattas said. “Arlington County is always open to community engagement throughout our processes and will continue to work with the community if and when any management strategies are implemented.”