‘An Excellent Table’ in Mount Vernon 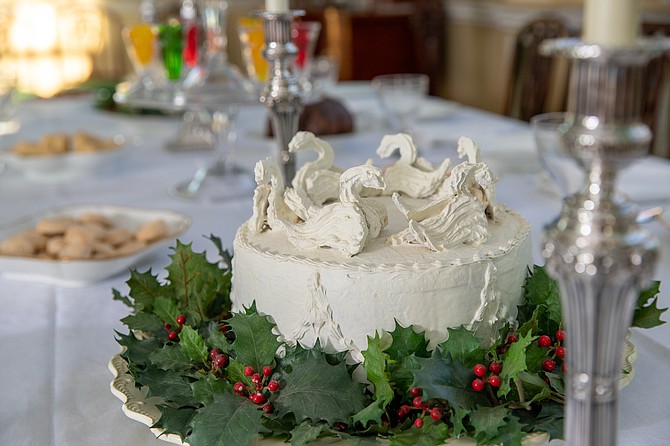 The dining room table in the “New Room,” the grand salon on the mansion’s north end, is laden with sumptuous, dessert delicacies and French porcelain dishes. The hedgehog cake with currant eyes is an eye-catching confection of almond paste, eggs, cream, sugar and butter molded into the animal’s oblong shape and punctuated with slivered blanched almonds representing bristles. 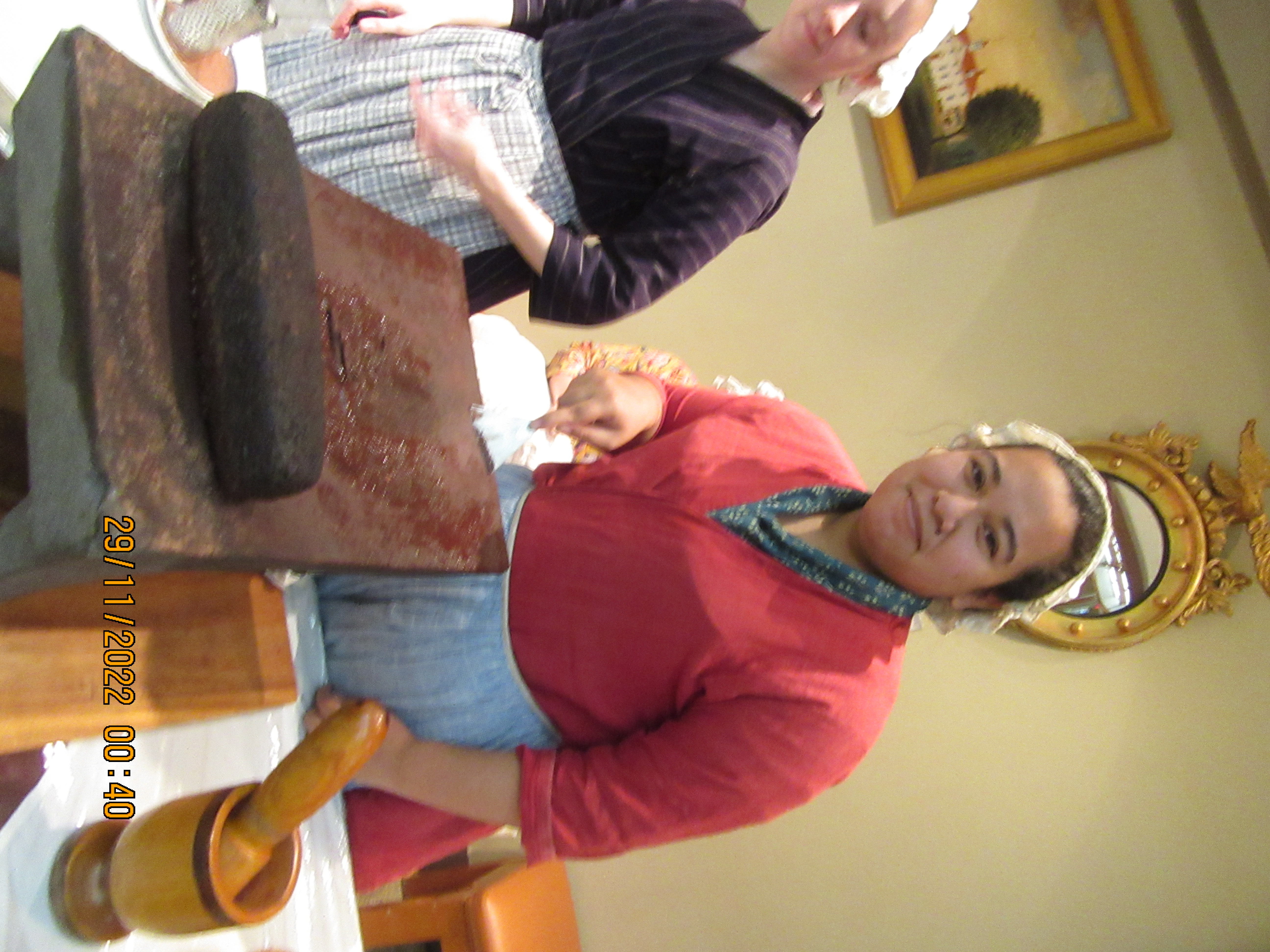 In the visitor center, Kayleigh Seng and other interpreters show how people prepared chocolate for cooking, using a mano and a metate made of volcanic rock.

Another attention-getter is the glass dessert pyramid, a London import, holding glasses full of brightly colored jellies. Cooks made this 18th century “jello” using gelatin from calves’ feet and fish, and added nutmeg, mace, sugar and fruit flavors. For colors, they made red with cochineal (tiny bugs), green with spinach juice and yellow from saffron.

The 12th night or great cake was likely made with 40 eggs, four pounds of butter and sugar, five pounds of flour and fruit and baked for two hours, then doused with wine and brandy, according to a recipe written by Martha’s granddaughter. Molded sugar swans sit atop the cake today. The baker always put a dried bean inside the cake and the lucky diner who got the bean was declared king or queen for the day.

The Washingtons’ plum pudding was not today’s custard-like pudding, but a dark brown cake, the predecessor of today’s fruit cake. Cooks wrapped the cake mixture in a cloth and steamed it for five hours. Also on exhibit are almond cookies, brownie-like almond cakes and cookie-size mince cakes.

Heads up, bird lovers. The kitchen’s holiday centerpiece is the Christmas pie made with five deboned birds – a pigeon, partridge, chicken and goose stuffed inside a turkey, all encased in a crust called a “coffin.” George liked to add bits of squirrel. Martha used Hannah Glasse’s cookbook which recommended five hours baking time in a brick oven.

The plantation’s enslaved people raised 200 hogs which yielded 400 hams a year that they smoked and cured in the smokehouse near the kitchen. The Washingtons ate ham every day of the year with one exception, the day the dog, Vulcan, snatched a ham from the kitchen. They enjoyed many different vegetables and fruits from their gardens and oysters from the Potomac River.

Procuring many of the ingredients for these dishes would seem arduous by today’s standards. Fortunately, Washington kept meticulous records and many visitors commented on the meals. George placed orders with various English merchants for things like almonds, refined sugar and exotic spices. Mount Vernon guides snicker and say that when George married Martha, the former bachelor stopped ordering pickles from abroad, that his “shopping list” changed significantly.

Diners imbibed cider, peach and apple brandy and ale, produced on the plantation. They sipped wine from France and Germany. George was fond of Portuguese Madeira.

George bought up to 50 pounds of chocolate bricks each year. Hot chocolate was a favorite holiday treat, made with ground cocoa, spices, hot water and a little sugar, then frothed. Year-round they enjoyed cherry bounce, a mixture of sour cherry juice, brandy, cinnamon, cloves, nutmeg and sugar.

Of course, the festive holidays and non-stop hospitality were possible because on the five farms, 317 enslaved people labored in bondage, 88 at the Mansion House Farm in 1799. Cooks like Doll and Hercules typically rose at 4 a.m. and finished at 8 p.m. when they cleaned up the kitchen.

Enslaved people received a daily ration of about four cups of cornmeal and five to eight ounces of fish. After the fall hog slaughter, they got the less desirable cuts, like the pigs’ feet, jowls and ribs. Some could supplement their food by having their own gardens, raising chickens and hunting wild game.

The enslaved people who did not work in the mansion got four days off for Christmas and celebrated with games and family time, says Annette Ahrens, Senior Interpreter. “Archeological evidence suggests they may have brewed persimmon beer for the holidays. Also, archeological evidence suggests a mix of Christian, Muslim and traditional African practices among the enslaved people,” she offers.

The Washingtons celebrated the Christian 12 Days of Christmas, which involved feasts, fox hunts and other festivities. The twelfth night doubled as a wedding anniversary fete since the pair married on Jan. 6, 1759. Because they had a steady flow of visitors, George once called his home “a well-resorted tavern.”

An English visitor in 1777, Nicholas Cresswell, was impressed. “He keeps an excellent table,” Cresswell wrote.