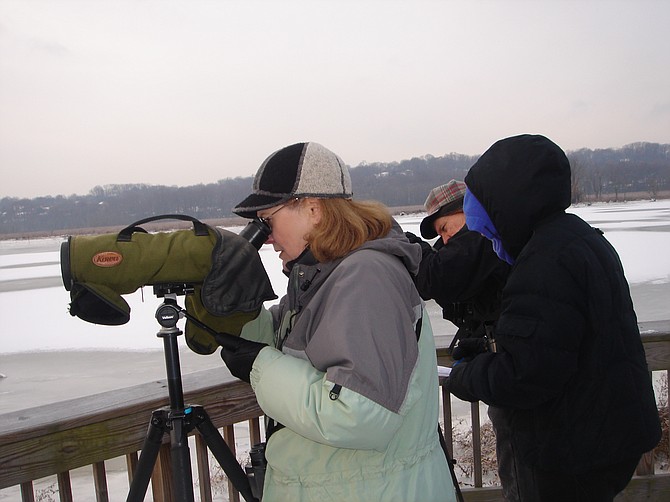 While landlubbers shiver from the cold and retreat to the indoors, out on Northern Virginia’s rivers and ponds, thousands of waterfowl paddle, dabble, dive and dine. As North America’s northern lakes freeze, even more waterfowl come south.  Birds migrate to use resources, especially food, that are seasonally abundant and to avoid places where resources are scarce or weather is very harsh. 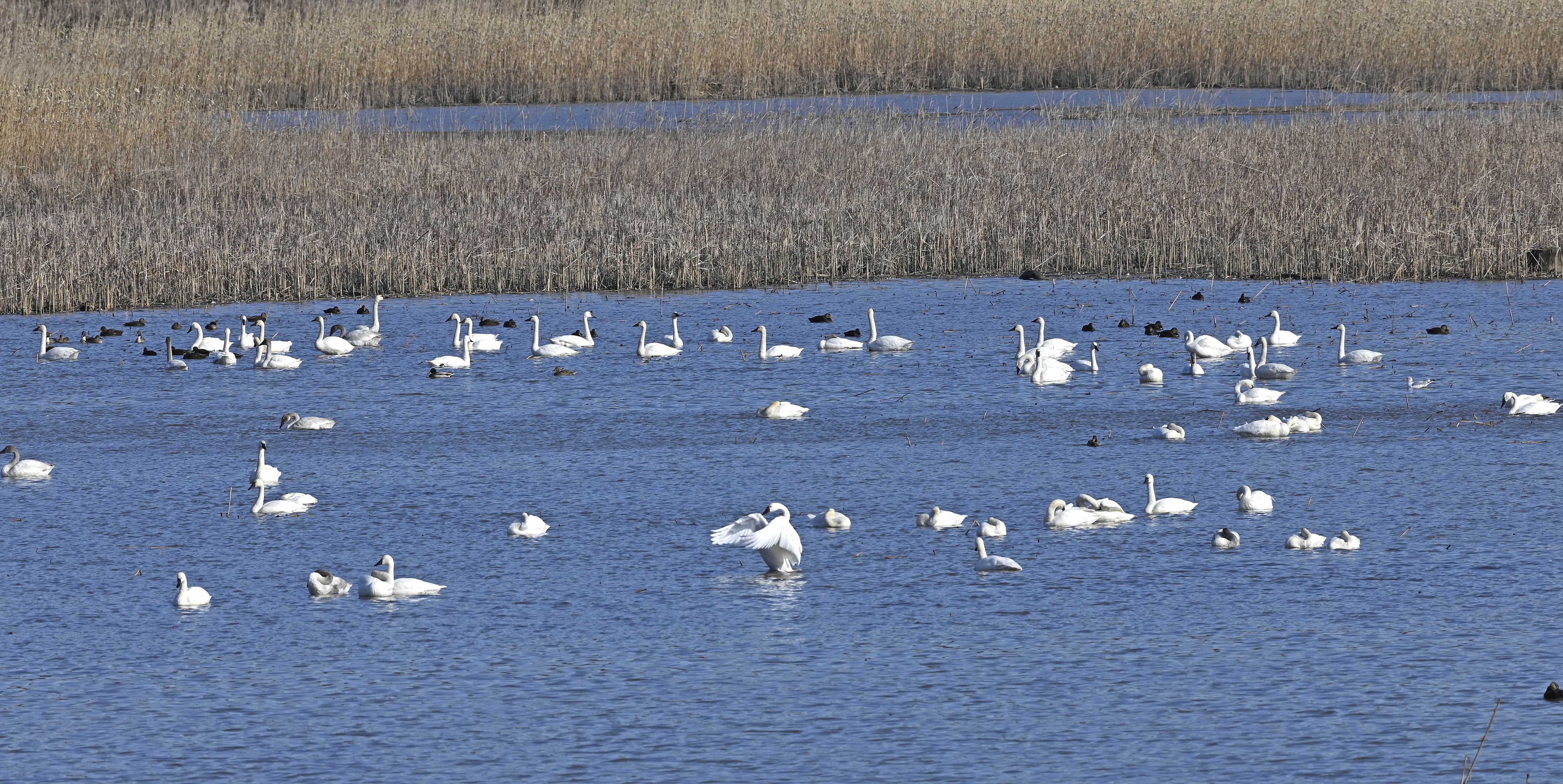 Describing the area’s wintering waterfowl, Larry Meade, president of the Northern Virginia Bird Club, recently wrote, “They are usually fairly easy to find since they are often swimming around out in the open. There’s no need to wait for them to hop out of a bush.”

The Audubon Society of Northern Virginia (ASNV) identified 25 species in the 2021 annual winter survey.  This year’s survey is now underway.

Swans are the largest waterfowl species. They have long necks and heavy bodies, fly with slow wingbeats and necks outstretched. Tchaikovsky must have been inspired by their beauty. Think of those “Swan Lake” ballerinas.

In December, tundra swans arrive in the area with up to 500 gathering off Mason Neck in southern Fairfax County. They are especially striking with a black bills black legs, straight neck, a six-to seven-foot wingspan and high-pitched, bugling calls.  American explorer Meriwether Lewis called them “whistling swans” because their wings “whistle” when flying. They feed on aquatic plants, tubers, invertebrates, mollusks, snails, mussels and shellfish. In March, they return to their breeding grounds in Alaska and Canada’s Hudson Bay.

Waterfowl watchers delight in spotting many duck species in area waters in winter.  In “duck world,” there are generally two types – dabblers and divers. Dabbling ducks feed in shallow water by putting their head in the water or dabbling to feed on vegetation, larvae and insects. With their head down, their butts poke straight up. Some, like northern shovelers, skim the surface of the water for food.  Diving ducks dive into the water, feed on clams and fish, and can propel themselves underwater. 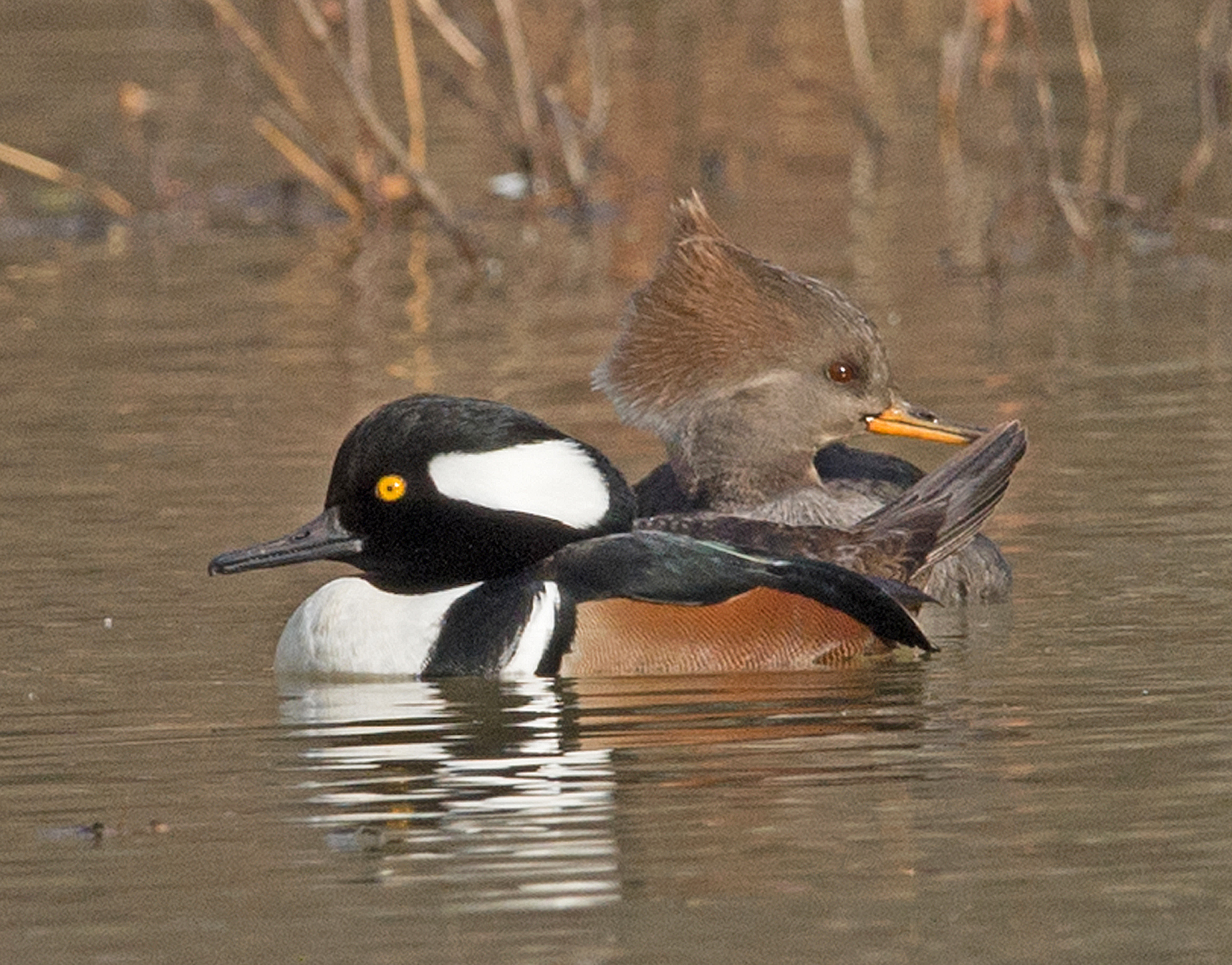 Dixie Sommers, an avid bird watcher, likes to watch the three species of mergansers in the area, especially the hooded merganser. The male has a striking white “hammerhead” crest or hood bordered with black; a black face, neck and back; a white breast and chestnut-colored sides with accents of white stripes. The female has a cinnamon-colored crest. Mergansers also have an extra, transparent eyelid called a “nictitating membrane” which protects their eyes like goggles when they are under water.

Geese are long-necked birds, larger than ducks, that feed by tipping up or grazing.  They usually gather in flocks. Most people have seen Canada geese grazing on golf courses or big grassy areas. Present in Northern Virginia year-round, they have black necks and beaks, brown breasts and white cheeks. While many people do not welcome the “deposits” they leave behind, former U.S. President Jimmy Carter liked to watch them fly over from the White House roof to listen to “a sound primeval in its tone and rhythm.”  He watched “long wavering V’s, breasts transformed to brilliance by the lights we would have dimmed,” he wrote.

Winter waterfowl numbers can vary for several reasons. If northern lakes do not freeze, water-dependent birds may not come south. Problems on the breeding grounds can reduce winter populations.

Algal blooms, sedimentation and heavy rains that cause murky water can block sunlight and impede the growth of submerged aquatic vegetation (SAV). These aquatic plants, also called “underwater grasses,” grow in the water up to the surface and provide refuge for small fish and shellfish.  The roots, shoots and seeds are high carbohydrate food for many waterfowl species.

“SAV is essential to waterfowls’ winter survival. If they can’t find it, they move on,” explains Larry Cartwright, a veteran birdwatcher and bird survey leader.

In the winter, males’ colors are often striking and females’ more subdued.  In late winter and early spring, hormones start bubbling, the birds’ colors brighten and courtship begins, behavior that can be mesmerizing for people. Male buffleheads, for example, swim in front of females and rapidly bob their heads up and down.  Male hooded mergansers raise their crest and jerk their heads backwards, almost touching their back.  As they return their heads to the upright position, they make a frog-like, croaking call.  Females bob their heads and give “a hoarse gack,” says Cornell University’s All about Birds.

How and Where to See Waterfowl

Viewing waterfowl can be challenging since the birds may not be close to the shoreline and diving ducks constantly go underwater and pop back up. Novices may want to go out with experienced birders. Having a spotting scope helps one see colors and wing patterns and varied shapes and sizes of heads and beaks.

People should never disturb or feed waterfowl.  Crackers, popcorn and bread bits, for example, are human food, not bird food.

There are other duck-like, swimming birds in area waters, in winter and year-round, that technically, are not called “waterfowl,” birds like grebes, cormorants and American coots.  Keen observers have spotted loons and shorebirds off and on, probably migrating through.