Best of Both Worlds for Dog Siblings Samson and Mishka
Votes

Best of Both Worlds for Dog Siblings Samson and Mishka 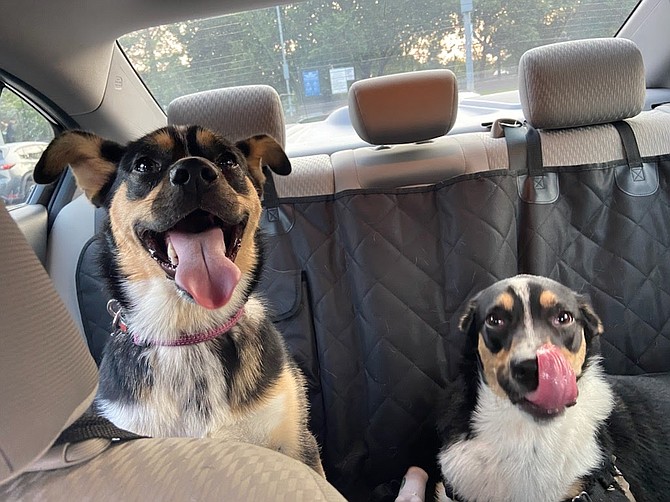 Dogs were buds and now the owners are buds too.

It’s been said time and again that there is no closer bond than the one shared between dog and owner. Except … what about the connection that dogs share with their actual siblings?

It’s impossible to know for sure, of course. While many dog experts do believe that littermates can recognize one another even if separated and then later reunited, there hasn’t yet been a dog with the verbal skills advanced enough to confirm this hypothesis.

Also, keeping littermates together isn’t as common as you might think, either. As Chelsea Jones, senior communications specialist for the Arlington Welfare League of Arlington (AWLA) explained, rescue organizations – and even breeders – often purposely avoid placing canine siblings together in adoptive homes because of “littermate syndrome.”

“Having littermates in the same home may result in behavioral problems or frustrations on the human end,” Jones said. “The two pups often bond together and may have a difficult time being apart, or even bonding with their owners. Training one puppy is a lot of work in itself – training two puppies can be a full-time job!”

Fortunately for dogs and littermates Samson and Mishka, these two have a healthy balance of having both one another in their lives, as well as living and bonding independently with their respective human families.

In December 2020, the lucky brother and sister dogs were adopted by a pair of next-door neighbors – Alyssa Tope and Galina Ginzburg of Arlington – who have been intentional about keeping the two dogs in each other’s lives.

Tope, Samson’s owner, and Galina Ginzburg’s next door neighbor, emphasized how perfect the setup is for Samson and Mishka.

“My husband James’s parents have dogs who are siblings, and they have been living together since they were puppies,” Alyssa said. “The feedback his mom gave us was that training siblings who live together can be difficult. With this setup, we feel like we have the best of both worlds because Samson and Mishka are each independent dogs in their own homes who have been easily trainable, but they also have the benefit of playing with each other whenever they want.”

Now going on two years old, Samson and Mishka were “pandemic puppies” along with their nine other siblings – born in the fall of 2020 in West Virginia to their mixed-breed mother, Sadie.

In November, Sadie and her brood landed in the care of the AWLA team, who ultimately placed all eleven puppies into different foster homes in groups of twos and threes. The two brother and sister puppies who would later become known as Samson and Mishka, respectively, were in the same foster home.

“Since we were all working from home in 2020, my husband, Aaron, and I decided we wanted a dog, but the shelters were (luckily, of course) experiencing dog shortages with so much of the public stepping up to adopt,” Galina recalled. “But then, the day after Thanksgiving, one of my friends who happens to be an AWLA foster told me that she’d be fostering three puppies who were a part of that litter of 11 – including a male (Samson) and a female (Mishka).”

When it became real that Galina and Aaron would be bringing home one of these puppies, they couldn’t help but share photos and puppy updates with their neighbors (and, at this point, good friends), Alyssa and James.

“We wanted to adopt a dog, too,” Alyssa said. “We knew the pandemic was the most ideal time to adopt with all the time we would be able to spend with the dog. Originally, we planned on getting an older dog since they have a harder time getting adopted – and we didn’t mind the idea of not having to potty train! But, once we saw the adorable photos of those three puppies in foster care, we knew we had to meet them. And, as everyone knows, once you meet a puppy, you can’t not bring him home!”

And so began a multi-dimensionally stronger, more beautiful friendship – both between the humans and the dogs.

“Even before we brought the dogs home, we shared information that led us to adopt from the same litter,” Galina said. “Little did we know how close the two dogs would be, or how good of friends we would become because of it.”

And as siblings of all species often do, Samson and Mishka have different (yet complementary) personalities. They also have periods when they act like typical human siblings, too.

“Both puppies are always eager to see each other with lots of zoomies and wrestling,” Alyssa said. “Samson is a sweet, playful gentleman and Mishka is a feisty energizer bunny. Still, they are both epic snugglers and love bugs. Samson can act like a protective older brother of Mishka, and they can both get jealous when the other is playing with another dog.”

This bond has been – and will continue to be – a major part of Samson and Mishka’s lives as well as for the Ginzburgs and Topes.

“The great thing for Samson and Mishka is that they have never had to spend more than a few days apart,” Galina said. “Alyssa and I, along with our husbands, have joked that if one of us moves, we would all have to move together.”

And perhaps that wouldn’t be so bad, either. While it’s common to hear about the many blessings that dogs bestow upon their human families, Mishka and Sam have gone above and beyond: they’ve been the foundation for a beautiful long-term human friendship.

“Galina and I bought houses next to each other in the same month in 2019 and for the most part just had typical friendly neighbor conversations until the pandemic hit,” Alyssa said. “Since we adopted during the pandemic, for long batches of time, we really only spent time with each other – while the puppies played. What started as passing hello’s based on proximity has blossomed into a strong friendship.”

To learn more about other puppies for adoption with the ALWA – including litters of irresistible puppies, visit www.awla.org.