The Trail Is for All, but the Railroad Was Segregated
Votes

The Trail Is for All, but the Railroad Was Segregated 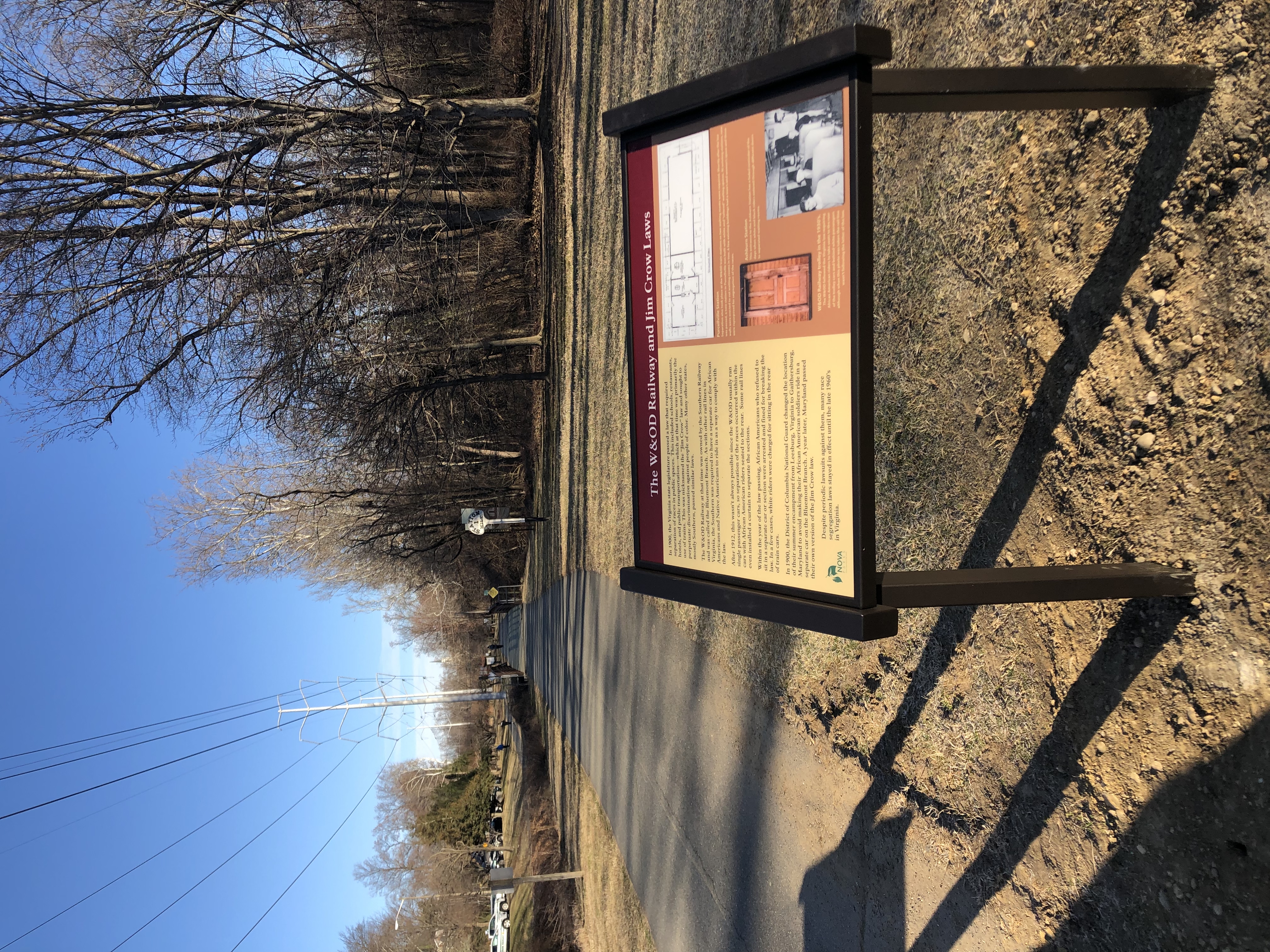 Cycling on the W&OD trail passing people of all races and ethnicities, it's easy to forget the train that once rode that path was segregated. Next Saturday @ 10am at the Bluemont Park Caboose, NOVA Parks will unveil a new interpretive sign about how Jim Crow laws affected passengers on the W&OD train line in the 1900s.

NOVA Parks owns and manages the W&OD Trail which stretches 45 miles between Shirlington and Purcellville, Virginia on the former roadbed of the train line which operated from 1859 until 1968. https://www.novaparks.com/parks/washington-and-old-dominion-railroad-regional-park

The interpretive sign draws from new research by NOVA Parks on the segregationist laws that regulated the W&OD passenger train service during the 20th Century. In 1900, the Virginia state legislature passed a law that required separation of races in public spaces like trains, then the main form of public transportation.

“Efforts that educate about the impact of segregationist Jim Crow laws in our community are essential: They remind us of our responsibility to ensure that our parks, transit and other services are inclusive and equitable for the present, and for generations to come,” said Katie Cristol, Arlington County Board Chair. “I’m honored to join NOVA Parks in recognizing the history of the W&OD railroad and renewing the commitment to make the W&OD trail a welcoming space for everyone.”

Named after a Black minstrel show character, Jim Crow laws perpetuated discrimination against people of color in the United States and were not overturned until 1964, when President Lyndon B. Johnson signed the Civil Rights Act. Many race segregation practices stayed in effect until the late 1960s in Virginia.

“Knowing our past is important to understanding the present. Injustice and inequity were built into the law and part of everyday life not that long ago,” said Julius D. Spain, NAACP Arlington County Chapter President. “The Arlington Chapter of the NAACP is pleased to partner with NOVA Parks to tell the story of how segregation was part of the rail service that is now the most popular trail in Virginia.”

NOVA Parks has placed identical interpretive signs in separate locations along the trail in Fairfax and Loudoun counties as well. The signs are part of an initiative to tell stories from Black history and tie in with a new theme in the NOVA Parks 2022-2027 Strategic Plan: Belonging.

“The W&OD Trail serves millions of visitors each year ~ visitors of every race, ethnicity, religion, and gender, and each citizen enjoys it with equanimity,” said Cate Magennis Wyatt, NOVA Parks’ Chair. “But lest we forget, while this was a railway, that certainly was not the case. Indeed, it is important to remember that inclusion and justice were not often valued, in this part of the country throughout the first half of the 20th century, when discrimination was the law.

In 1900, the Virginia state legislature passed a law that required separation of races in public spaces. This included schools, restaurants, hotels, and public transportation. Such Jim Crow laws sought to perpetuate discrimination against people of color. Many other states, mostly Southern, passed similar laws.

The W&OD Railway at that time was owned by the Southern Railway and was called the Bluemont Branch. As with other rail lines in Virginia, the Southern was required to have a separate car for African Americans and Native Americans to ride in as a way to comply with the law. After 1912, this wasn’t always possible since the W&OD usually ran single passenger cars, so separation of the races occurred within the cars with African American riders forced to sit in the rear. Some rail lines installed a curtain to separate the sections. Within the year of the law passing, African Americans who refused to sit in a separate car or section were arrested and fined for breaking the law. In a few cases, white riders were charged for sitting in the rear of train cars. In 1900, the District of Columbia National Guard changed the location of their summer encampment from Leesburg, Virginia to Gaithersburg, Maryland to avoid making their African American soldiers ride in a separate car on the Bluemont Branch.

Many Jim Crow laws were actually on the books until 2020. The Commission to Examine Racial Inequity in Virginia Law recommended repealing them in late 2019. For example, the 1904 Act of Assembly required: “Separation by race on all trains, cars, coaches of railroads or railways – statewide law of railroad conduct and standards.”