‘It Wasn’t Just about the Column; Other Things Needed to Be Done’ 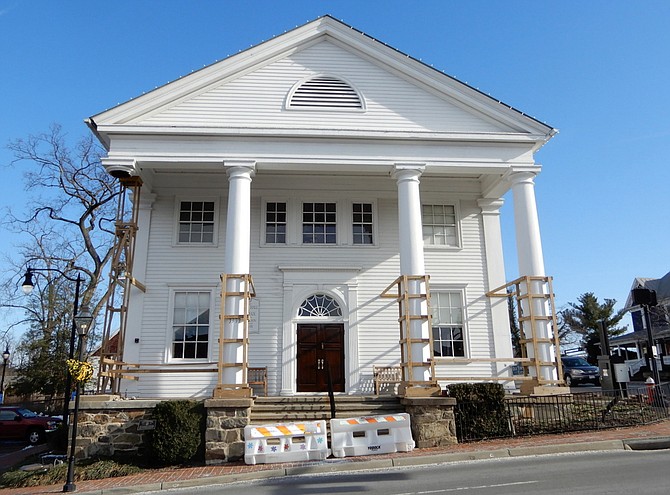 The hole at the top shows where the fallen column was.

Arguably the most recognizable and iconic building in the City of Fairfax is Old Town Hall at the corner of Main Street and University Drive. So when one of its pillars fell off and crashed to the ground, in the wee hours of Aug. 14, 2020, residents were stunned.

Traffic cameras captured the action around 4 a.m. And while the building’s four columns are mainly for looks and don’t actually support anything, the City had a third-party, structural engineer evaluate the remaining three columns and the building’s overhang to check its integrity. 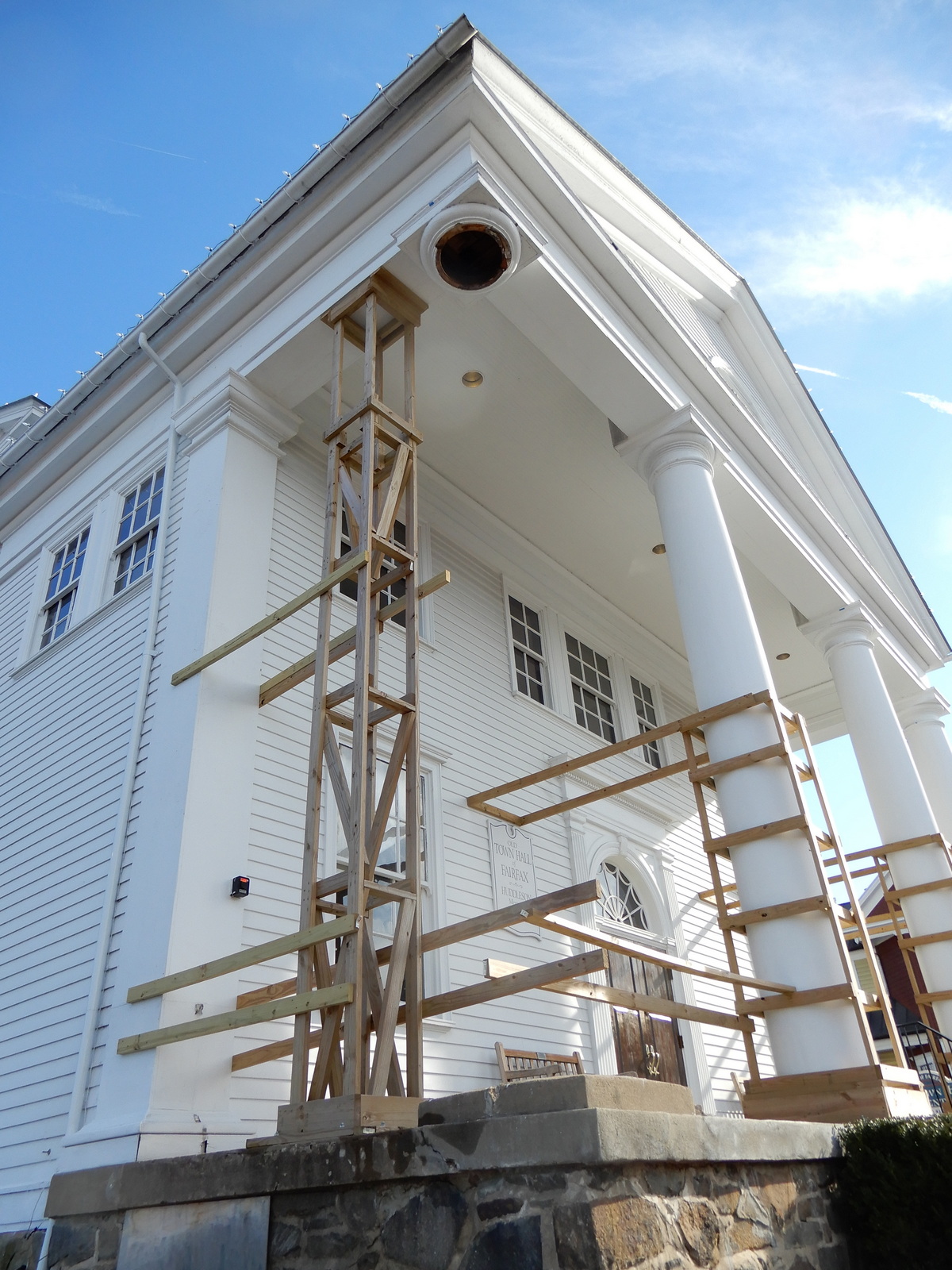 The hole at the top shows where the fallen column was.

In addition, a Virginia historical architect advised the City about needed repairs to the then-120-year-old building. And now that the data’s been gathered and a construction contract awarded, work is underway to make Old Town Hall even better than before.

“For the past few years, it’s looked like the Mona Lisa with a tooth missing,” said Andrew Wilson of the City’s Public Works department. “We’re going to fix that.”

Constructed in a classical revival style, Old Town Hall was built in 1900 by Joseph E. Willard, who later donated it to the City. In 1987, it was added to the National Register of Historic Places as part of the City of Fairfax Historic District.

A beloved Old Town landmark, the white, two-story building is often used for weddings, parties, meetings, cultural and artistic programs and performances. It also hosts special events such as the annual Chocolate Lovers Festival and Lunch with Santa.

The week before the 21-foot column fell, the City of Fairfax was deluged by torrential rain, and Public Works Director David Summers believes that’s what ultimately caused the column’s demise. “We think water got in there during the heavy rains and rotted it at the bottom,” he said, the next morning. “We think that was the tipping point. And all the damage was on the inside of the column – you couldn’t see anything wrong from the outside.”

Pointing at a couple piles of wet pieces of wood on the ground that broke off from the white-painted pillar, he noted that, “These are hollow, wood columns with no structural support, at all. The columns at City Hall have a structural steel beam inside them because they’re load-bearing; these aren’t.”

Then, looking at the inside of the top of the column, also on the ground, Summers said it was obvious, as well, that “Birds got in there from the roof and roosted. And if birds could get inside the column, so could water.”

He was right, but the subsequent inspection revealed more problems that need to be rectified. Wilson presented details during the Jan. 25 City Council meeting. “The person who made the columns had never made them before,” he said.

Making matters worse, added Summers, “Someone had put a coating around that column, so we couldn’t see the rot. But it was rotten to the core.”

Now, said Wilson, “The entire concrete porch floor needs to be replaced. But it’ll be supported by a steel foundation, not a wooden one, for greater longevity. And it’ll also be stronger. We’ll raise the porch floor in front to make it ADA-compliant, add an ADA ramp to the side entrance and add stairs that’ll come down to the parking lot.”

He also noted that the current utilities at the corner of University and Main will be moved elsewhere. However, he said that work isn’t part of the contract; instead, the City will do it.

MTFA Architecture did the building’s condition assessment and made several rehabilitation recommendations. It said the failed column must be replaced, but the remaining columns may be reused.

It stated that, “The probable cause of failure stems from moisture and lack of ventilation. This issue will continue to affect the standing columns if not resolved.” It then recommended a new, cast-aluminum plinth – a structure at the base of each column – be installed to both support and ventilate the columns.

MTFA also recommended the porch replacement Wilson mentioned, plus reconstruction of the building’s stone foundation walls. Furthermore, a Building Code analysis confirmed deficiencies with the existing west stairs and recommended they be replaced. It also recommended providing additional stairs at the north side of the portico to mitigate any safety concerns, as well as the ADA accessibility measures Wilson discussed.

After advertising this project for bids, the City awarded the construction contract to Kadcon Corp. Phase one work will include replacing the portico, stairwell, one column and rehabilitating the remaining, three columns. Then landscaping and a new retaining wall will be provided on Main Street.

The contract allows 225 days for completion – which is anticipated by mid-September. It includes all calendar days and allows for planned events, such as July 4 and already-scheduled weddings. Days may be added for inclement weather.

No new events may be scheduled until completion, and the contractor may close one lane of University Drive during construction. Doing so, said Wilson, “will speed up this project considerably because it’ll give them more hours to work.”

Councilmember Joe Harmon asked why a second staircase is being added to the side of the building. “The center staircase is steep and leads to a narrow sidewalk,” replied Wilson. “And the new one will provide a more direct route to the parking lot.”

“Is the 225-day commitment dependent upon their ability to close down one lane of University Drive?” asked Councilmember Sang Yi. Summers said yes because it’ll enable the crew to work additional hours.

“Especially during spring and summer, when they can work longer because of Daylight Saving Time,” added Wilson. “It’ll save about two-and-a-half months of construction work by allowing them to close that lane.”

Still, said Yi, “I don’t believe it’s worth it. But can they not do it during rush hour?”

“It would cost more for them to set up and take down the closure each day,” answered Summers. “And that would increase the cost by about $75,000.”

Seeing the wisdom in Summers’s words, Councilmember Janice Miller said, “We can use Chain Bridge Road or East Street and Old Lee Highway, [instead]. And we can let people know to use other roads. I’m happy to support this proposal, and I’m happy that this process is moving forward.”

Agreeing with her, Councilmember Tom Ross said, “It wasn’t just about the column; there were a number of other things that needed to be done. This will be useful and up to standards for many years to come. I think people will understand the road closure and temporary inconvenience. We want this done in an efficient and cost-effective way.”

Furthermore, added Mayor David Meyer, “Putting up and taking down the lane closure each day poses a risk to the workers.”

The Council then officially approved awarding the construction contract to Kadcon. It also unanimously endorsed a motion to approve $590,000 for the cost of the phase one construction.