Secret Garden emerges from shrouds of invasive plants with work of volunteers. 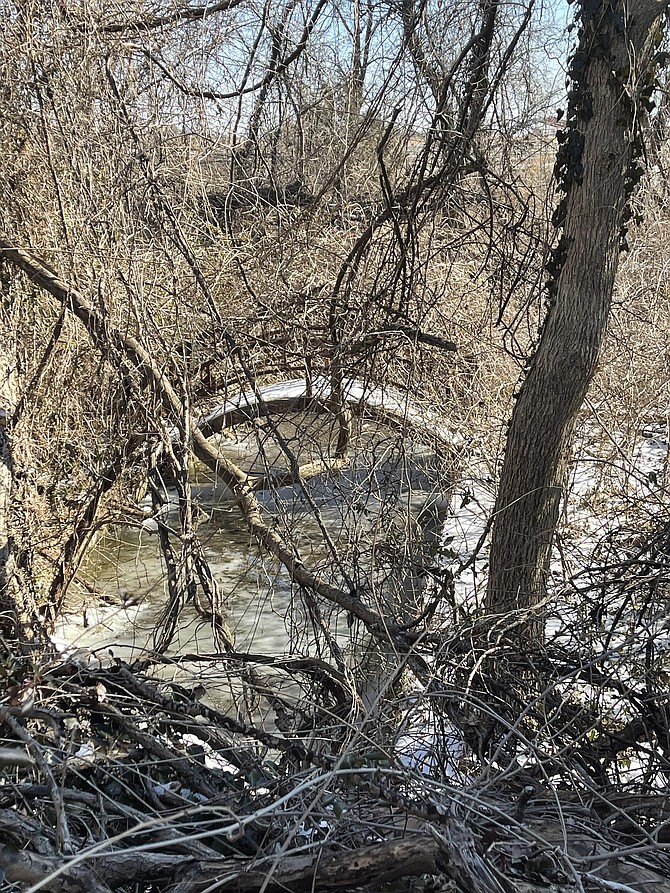 Lorton’s iconic lantern is mysteriously re-lit and glowing with a faint light visible at night, but there’s been no new light shown on the mystery of the lantern’s origins, who built it or owned it decades ago. The land where it sits was part of a July 2002 land transfer to the Fairfax County Park Authority.  Located in Laurel Hill Park near the park’s Central Green, the cement and quartz monument with iron grill work, once lit with electricity but dark until recently, presents a quirky and artful marker for the park, and a reminder of the land’s historic uses. 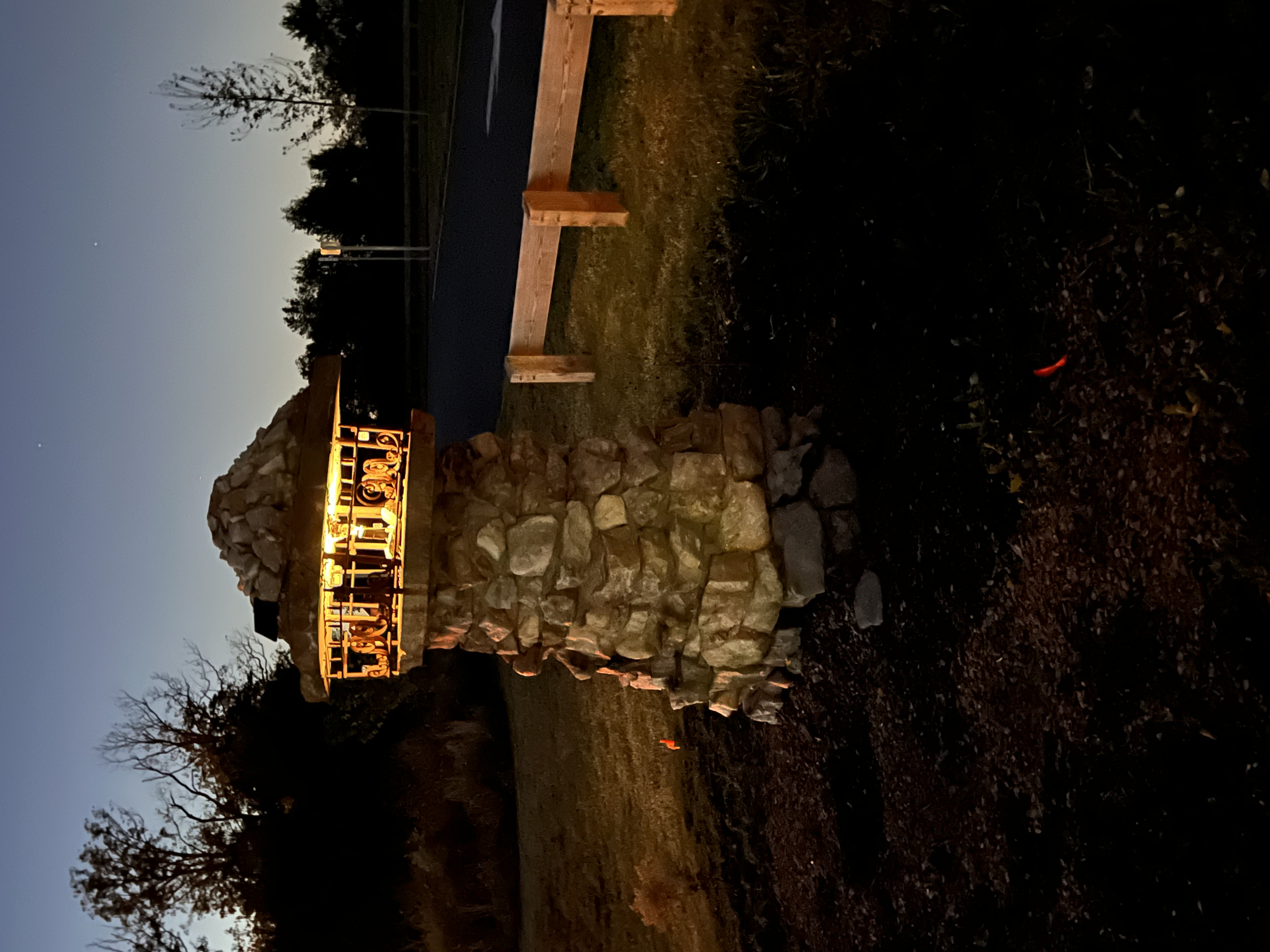 Laurel Hill Park’s iconic lantern was mysteriously relit in October shedding a dim light around it, but darkness still surrounds its origins, builder, and past ownership.

The lantern generally is held by locals to be one of two identical structures that marked the entrance lane for a house of some significance. The house and its substantial garden can be seen in grainy pictures in Fairfax County’s historic photograph collection in the year 1937, but they disappear by 1953 pictures. The second lantern, if not a myth, is gone now too, as is the foundation of the 1900s era house; both likely the victims of the rerouting of Lorton, Telegraph, or Workhouse roads, or some prior catastrophe.

As intriguing as the house and lantern, park volunteers have re-discovered and begun restoring the intricate “secret” 1930s era garden with permission of the Park Authority. Tucked away in an obscure section of the park, guarded by dense growths of black berry thorns and poison ivy, it has been seen by only a few. Descriptions of the monuments and garden are included in Fairfax County’s application to the U.S. Department of Interior for designation in the National Register of Historic Places. The Register describes it only as “the remnants of a sunken garden once associated with a building that previously stood on the site … established by 1937.”

THE THREE-TIERED garden uses quartz hardscape matching the lantern to edge its garden walls, as well as to create an eight column pergola. Along with a brick barbecue, the features create an outdoor living section of the garden; evocative of the current trend for outdoor living spaces. A decorative cement bridge connects two tiers of the garden on either side of a rectangular cement garden pool. Curved cement sidewalks with inlaid decoration grace walkways to wide slate and brick steps leading into the garden tiers; features unusual in simple houses of the era. A short distance away are traces of another garden area with iron trellises and, most notably, a larger version of the lantern, also of quartz with high wooden rails and a metal cap.

Another feature, a raised, enclosed, unsurfaced tennis court is nearby, visible in historic pictures after the house had disappeared and likely used by D.C. workhouse staff.

WHO OWNED the house and its substantial grounds? Hours of historical research have led to more dead ends than certain answers. It’s known the property was part of the area seized by the District of Columbia in 1910 to provide land for the Lorton workhouse.

At the time of the land condemnation and seizure (in modern terms, eminent domain), the property was owned by Luther A. Denty. He received $3,349.24 for 212 acres, including his 84 acre parcel which included the land where the house and garden have been located. The payment amounted to approximately $16 per acre. Denty was a merchant, whose father, Alexander Denty was a wealthy merchant with significant land holdings. Denty likely had adequate means to build a substantial house with elaborate gardens during his ownership. But did he have the opportunity? He purchased the land in 1902 from an heir of Elizabeth Violett, her son Thompson Violett. In 1909 the court realized that the deed for the 1902 sale had not been recorded and corrected the error. Because of the error, no taxes were collected for the parcel during six years of Denty’s ownership, so no information is available on possible improvements made during that time. The next year the property was seized by the government. Soon after, in 1912, Denty died of tuberculosis at age 38. He is buried at the historic Pohick Episcopal Church, the home church to founding fathers George Washington and George Mason.

Could the house and garden have been present when purchased by L.A. Denty? Thompson Violett was the prior owner. He purchased the property at a commissioner’s sale of land in February 1874. That sale was decreed by the Circuit Court of Fairfax County for payment of his mother’s debts at the time of her death. The sale notice for Elizabeth Violett’s land described the property: “is without improvements, but is of good quality and well located.” 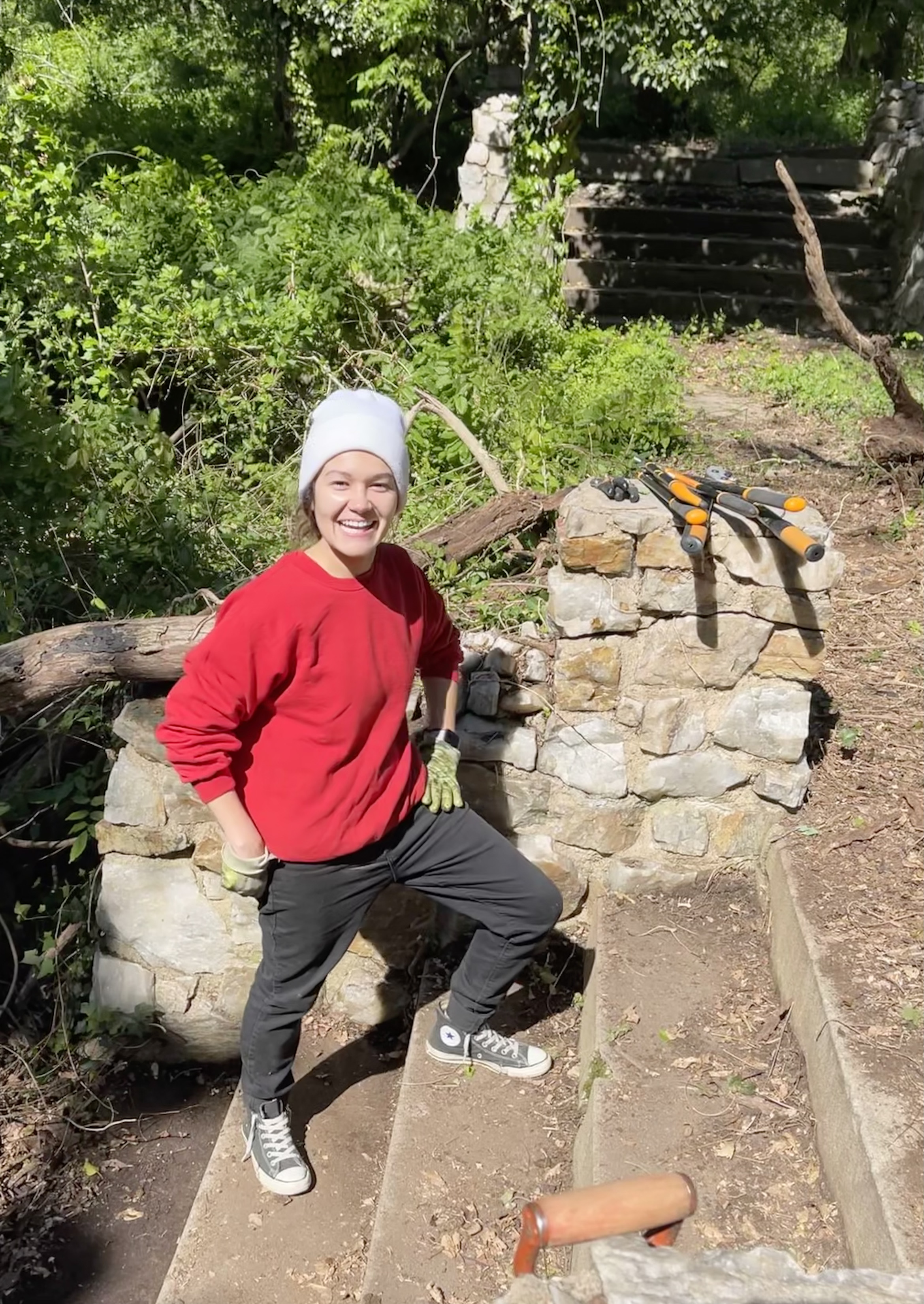 Volunteers, included Lauren Struble of Alexandria, worked to clear the steps and garden tiers of invasive plants, including non-native Wisteria and English ivy during the winter 2021

Could Thompson Violett have improved the property prior to the commission sale? The four children of Elizabeth had divided the land they inherited from their mother. In the chancery court records there is mention that Thompson intended to give some of the land to his son Milton on which to build a house. The court record indicates Milton paid for lumber to be milled for the building, but later tried to recoup the money paid to the sawmill. This suggests the lumber was not used and the house was not built while Thompson or Milton Violett was the owner.

Could the house have been built earlier as Elizabeth Violett’s home?  She was a widowed farmer who owned between 50 to 116 acres during her lifetime. In 1861, tax records show she owned three enslaved people, two horses, ten cattle, and five hogs. During that period in the early 19th century, farmers in southeast Fairfax County had focused on tobacco production which exhausted the soil. Much of the land was left fallow and uncultivated beginning in the 1840s until after the Civil War. Violett was exempt from taxes between 1861-1864 but speculation is that by this time her farm was not productive.

Reports of the day indicate that during the Civil War her property was used as a landmark as well as a campsite. Though no major battles took place in the immediate area, her house was the site of a skirmish on March 22, 1863. The 4th Virginia Cavalry surprised members of the 2nd Pennsylvania Cavalry who had camped on Violett’s farm that evening. The skirmish left three Union soldiers wounded or dead, 20 Union soldiers captured, and two Confederates wounded. Could she have built a substantial house and garden which captured the attention of soldiers as a landmark? Or was her house more fitting for a poor farmer who died with debt?

FINALLY,  COULD the house and gardens have been built by and for the use of workhouse staff?

Other historic references indicate that the prison superintendent was housed in the 18th century Laurel Hill House, from which the area gets its name. Laurel Hill House was the home of Revolutionary War patriot William Lindsey, who built the house after his purchase of 1,200 acres in 1787 and 1790. He was a carpenter and tavern-keeper and one of the first owners of large tracts of land in the area. Laurel Hill House, still standing but in disrepair, also has terraced gardens with brick hardscape built circa 1937.  Since this is the known house and garden used by the superintendent, the highest ranking person at the workhouse, it seems unlikely another more elegant house and garden were built by the prison for a lower level staff person.

While the lantern is shining a new light in Lorton, this bit of history is still dark.

History detectives who can shed additional light on the story of the lantern, house, or gardens are invited to contact The Connection editors@connectionnewspapers.com

The author extends thanks to Elaine McRey, Virginia Room, Fairfax County Public Library; and Georgia Brown and staff of the Fairfax Circuit Court Historic Records Center for their hours of helpful assistance in the research of this story.