Looking Back and Ahead in Great Falls
Votes

Looking Back and Ahead in Great Falls 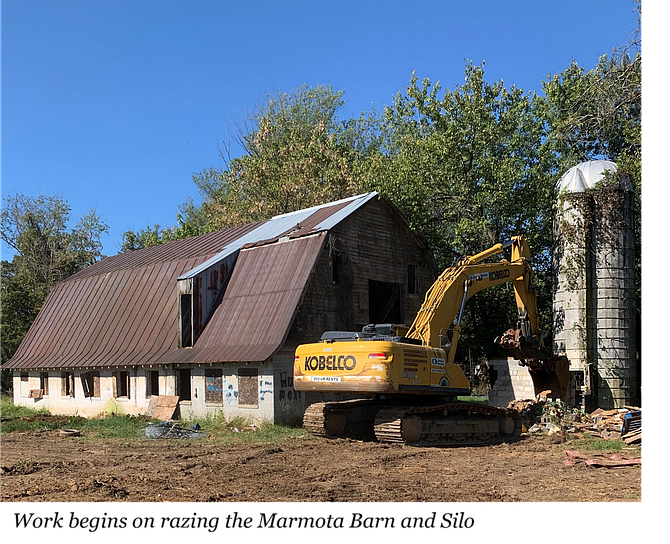 Razing the Marmota barn and silo.

The Great Falls Citizens Association released  its Special Report: Land Use & Zoning Highlights, 2021 Year in Review. Authored by Jennifer Falcone, chairperson of GFCA's Land Use & Development Committee, and GFCA member Peter Falcone, the report described how the committee tackled several Great Falls land issues in 2021. However, many of the most challenging matters remain at the forefront of the committee's 2022 agenda. 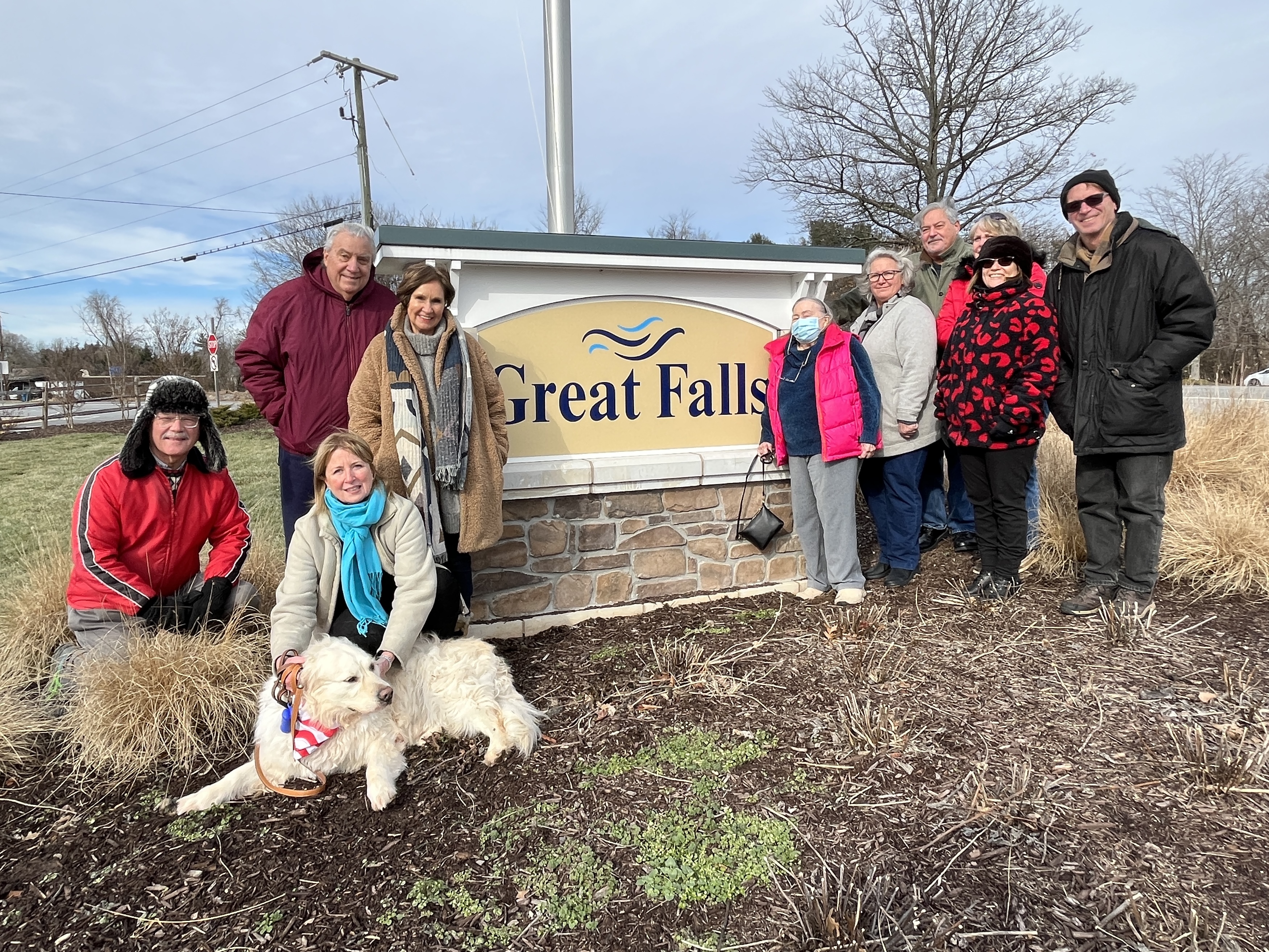 The Year in Review highlights that residential and commercial expansion continues in Great Falls and Fairfax County, "In one day in December 2021 (12/08/2021), more than 60 building permits were filed with Fairfax County for projects valued at more than $14M in total."

The report stated that this trend would likely drive demand for new residential construction, including in-fill and by-right development within larger lots in Great Falls. The report cited concerns that increased density and land use in Great Falls could have unintended effects similar to those in other Northern Virginia and Washington metro areas — increased traffic congestion and air pollution. A second impact was that rainwater runoff increases as impermeable hardscapes increase with construction. It diminishes water quality and reduces options for outdoor recreation.

The infrastructure required to accommodate and support such patterns has unintentionally depleted public resources and negatively affected public health and well-being. This section in the report read: "Even at low densities, poorly planned development can fragment natural habitats, greatly reducing the value of remaining open spaces for biodiversity, recreation, and other uses."

In the report’s section, In-fill and New Residential Construction, the authors described how the Fairfax County Comprehensive Plan considered both the county's growth and its shrinking vacant land supply. Available residential land will be nearly depleted by the turn of the century if current trends continue. The report claims that the county rejects few plans. County officials may use special exceptions, permits, and zoning amendments known as "up-zoning"  to support those seeking changes in zoning restrictions. "Larger lots are being subdivided and contribute to increased density. Residents of Great Falls are now experiencing this effect, notwithstanding the way the Comprehensive Plan characterizes this community," stated the report.

The report addressed issues with five site-specific developments, beginning with the Rivermont subdivision in the heart of Great Falls. GFCA's main concern was problems controlling large amounts of runoff from the site to nearby Walker Lake. GFCA discovered, the report says, that the developer did not have a county record of noncompliance even with numerous code violations reported by neighbors.

A second development project discussed was the recently built Hortense Place subdivision off Georgetown Pike near Fairfax County Park Authority's Observatory Park at Turner Farm. It prompted GFCA and the developers to meet in 2021 to discuss the proposed installation of non-conforming brick columns along the Pike's frontage and 22 non-compliant exterior light fixtures on those columns. "GFCA engaged with the property owners to inquire about plans and advise that this additional proposed lighting on the trail outside of the subdivision could interfere with the nearby Turner Farm Park Observatory activities as well as affect driver vision along Georgetown Pike after dark,"  according to the report.

Cornwell Manor Farm, a significant historic property, is another project the report reviewed. The 19th-century manor house is surrounded by cleared land and site development. "Preservationists are concerned over the effects this might have on this heritage resource and the resulting transformation of the eight-acre parcel," stated the report.

A Special Permit Application for a so-called convent/monastery/nunnery at 815 Walker Road was also cited as a concern. The report said, "This effort resulted in an unprecedented action by GFCA to join an appeal application before the County's Board of Zoning Appeals (BZA) to challenge the Zoning  Administrator's Use Determination that described the project as a "convent"  although its proposed residents would not be members of an enclosed religious order who have taken solemn religious vows."

However, "the watershed event of 2021 was the transfer of ownership to Toll Brothers of the historic Marmota Farm," a 22-acre tract at 9800 Georgetown Pike. Work on the site, bounded by the Innsbruck neighborhood and the Fairfax County Park Authority's Grange and Old Forestville Schoolhouse, began in 2021.

Fairfax County Land Use officials approved the plan for the development of Marmota in 2006. With approved "grandfathered"  stormwater management standards by right, the project prompted GFCA and the surrounding community to action. GFCA insisted on having the stormwater management calculations reviewed. Their efforts resulted in changes to the site plan and a new roadway entrance connecting the development to Georgetown Pike listed on the National Register of Historic Places. GFCA also took issue with development’s impact on the Pike's scenic watershed.

A prominent Southern Red Oak on the right-of-way of Georgetown Pike has been saved for the time being after GFCA hired two independent arborists to oppose the county's tree-cutting decision. The Virginia Department of Transportation (VDOT) says the tree is in its right-of-way, and the county's opinion is irrelevant.

Begun in 2021 is a Brightview Senior Living facility being proposed for the current site of Wolftrap Nursery on Leesburg Pike, zoned R-1. It is planned as a continuing care facility to accommodate 172 residents. It would be situated adjacent to two R-2 zones to the south and an R-1 to the east.

According to the report, three new residential subdivisions along the historic Georgetown Pike are expected to impact the road’s historic viewshed. Trees and natural vegetation along the Pike's  "summer roads"  are removed for subdivision, land clearing, and site development.

As for GFCA's action concerning Zoning Administration, the report told how GFCA joined other community groups in opposing a proposed Zoning Ordinance Amendment that would have restrict the display of the American flag. That provision was ultimately revised.

GFCA and other organizations also objected to removing public hearings from the agritourism application process and the absence of safety requirements for such buildings.

GFCA supported a Dark Sky Preserve around the county's observatory in Great Falls and increased oversight of outdoor lighting requirements. The proposed changes would protect the Observatory at Turner Farm Park. This action stemmed from GFCA's 2020 request to the Planning Commission for a zoning amendment to help protect the night skies near the Great Falls Observatory.

In the section, The Way Forward, the authors stated that GFCA would continue its voluntary efforts to monitor land use and zoning issues while protecting its community's vital resources.

Membership in the GFCA is open to all Great Falls residents. If you are concerned about issues mentioned in the report, contact zoning@GFCA.org.