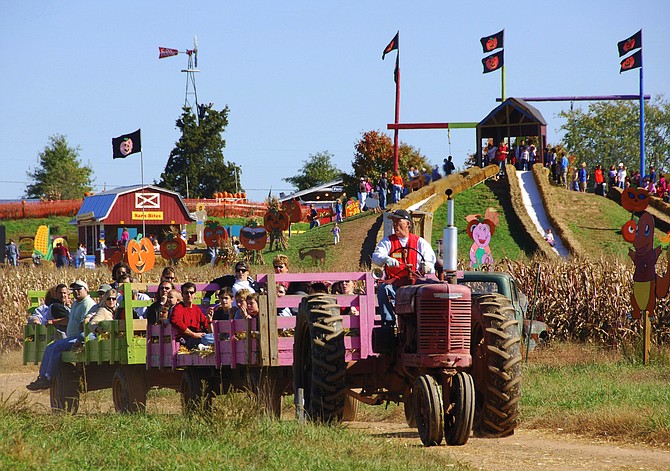 The hayride passing by the mountain slides.

Laughter, hugs, friends and families chatting, tasty food, and children happily playing outside – that’s the vibe during Cox Farms’ annual Fall Festival. But it was also the scene on Sunday, July 10, when this Centreville institution celebrated its 50th anniversary.

“Thanks to everyone who came out today,” said co-owner Eric Cox to the 500-some people attending. “This is a celebration of 50 years of Cox Farms and the thousands of people – family, employees, vendors, suppliers and community members – who made it happen.”

He and his brother Steven founded Cox Farms in 1972, running a farm stand in Vienna for 38 years, along with Eric’s wife, Gina Richard, who became their business partner. Then in 1979, Eric and Gina bought 116 acres on Braddock Road, in the far western corner of Fairfax County, despite bankers and advisors saying no one would ever travel that far to visit them.

“We were looking for a farm to buy, and friends helped us with financing,” said Cox. “Thanks to them and you, we’ve thrived – and we hope to do so for many more years.”

However, when the couple first moved there, throwing gigantic festivals that eventually attracted thousands from throughout the Washington Metropolitan area wasn’t their first plan.

“We wanted to grow vegetables and host pick-your-own strawberries for the public,” said Richard. “But we quickly discovered the land wasn’t fertile and we’d be better off doing more education and entertainment here.” So that first year, Cox arranged a hayride for a group to pick pumpkins. And over time, they transformed 90 acres of their property into an autumn wonderland.

“This was just flat pasture,” said Richard. “But when they started digging out the basements for the buildings at the Westfields Corporate Center [in Chantilly], people brought their dirt here. We also dug up our land to put in a pond, so that gave us more dirt – and that’s how we built all these hills for the mountain slides, etc.”

Cox Farms’ first fall festival was held in 1985 over just one weekend. Since then, its popularity has grown exponentially. At 15621 Braddock Road, the funfest runs almost every day from mid-September through early November.

Whether people come for the hayrides, rope swings, giant slides, baby animals, pumpkin catapult, apple-cider doughnuts, space aliens in the cornfield, or any of the other attractions, the festival offers something for everyone. The scarier portion, Fields of Fear, aimed at older teens and adults, comes alive at night.

The best part, said Richard, is “seeing kids get to run, play and be outside – and seeing their happy faces, picking out their pumpkins.”

It’s always been a family affair, with the Cox-Richard children helping as they grew. But as the event itself, got bigger, high-school students and area residents were hired to work at the festival, and it now takes nearly 600 people to put it on.

So, said Richard, the anniversary celebration was also a thank-you to them. “The families working here become part of our extended family,” she explained. “So this event is for all the past and present employees, family and various community members who helped throughout the years.”

Beth Green-Tweddle has worked there 12 years – in Fields of Fear and on the Mountain Team, managing the mountain slides – and enjoys doing it. “Cox Farms harvests happiness because it’s a great escape outside,” she said. “You can rack up 20,000 steps on your Fitbit and not realize it. And the Cox family is fantastic – wonderful people.”

Lisa Barrett was also on the Mountain Team, managed the kitchen and helped “paint and stain everything – buildings, tables, signs. It’s a great place to work, lots of fun, and I love to be outside. The anniversary celebration is spectacular; hopefully, they’ll have 50 more years.”

As a student, Katerina Chebotaryova managed lines of people at the ticket booths. “At times, they sold 20,000 tickets a day,” she said. “Fields of Fear usually gets 7,000-plus people and sells out most nights. I was also a cashier on Saturdays and did customer service on Sundays.

“I loved interacting with people, and the Coxes treated me as an adult. I had fun helping people and seeing little snippets of everyone’s day, such as parents corralling their kids into the lines.”

Working at the festival since 2009, Jeremy Gerken also did a variety of jobs. At season’s end, he drops huge pumpkins from a cherry picker, much to the crowd’s delight. And as a Fields of Fear actor, he portrayed a chair that scared people when it “came to life.”

He then supervised other actors and headed up the nighttime hayride. “I’m now a scare director and also in charge of the Corn Nightmare and the Dark Forest,” said Gerken. “I like it best because I get to be creative, designing the mazes and thinking up themes for them.”

John Lord worked 10 years at the festival. “I drove tractors for the daytime hayrides, and then at night, once Fields of Fear started,” he said. “I liked the old tractors and the people coming here. And I loved the way the Cox family treats people – especially young, first-time job holders. They knew them by name and gave them the tools and resources they needed to be successful.”

“The Coxes have always said the customer experience is the most important thing,” continued Lord. “They want people to have fun, and each employee is empowered to make that happen. And that relationship with the customers makes it like a great, big, community family.”

He recalled one time when a family visiting the fall festival ran out of gas as they were leaving. So, said Lord, “I went to the fuel shed here, got five gallons of gas and put it into their van. I didn’t ask permission because I knew the Coxes would want me to do that – and they did.”

In 2017, Ivan Delao was a Fields of Fear actor. “I was a clown with a chainsaw and would sneak up and scare people on the hayride when the lights went off,” he said. “I didn’t feel like it was work; I had a good time. And in the daytime, I sugared or boxed doughnuts or gave them to people, and that was fun, too. I also liked the people I worked with – it was a great atmosphere. In fact, you see people work here, and then – years later – their kids work here, too.”

He was at the anniversary celebration with his cousin, Diana Jimenez, a festival employee since 2016. “I started in the daytime on the Mountain Team, helping kids go down the slides, and I also helped set up the festival,” she said. “Then I acted with my cousin, haunting people on the Fields of Fear hayride. I did theater in high school, so it reminded me of that – getting into costume, putting on makeup and being part of a family,”

“My brother and another cousin also work here,” added Jimenez. “There are lots of families working here.” What makes Cox Farms special, she said, is “the community you build here and the acceptance you feel. And they’ve built a lot of traditions for many people.”

As for the 50th-anniversary celebration, Gina Richard – who retired last year – said, “I’m thrilled to see everybody. We’re proud of the business and the job our kids are doing, and we’re glad they’re being innovative and carrying the torch.”

“Our broader mission is working together to create the unique and magical Cox Farms experience – creating joy, making memories that’ll last forever, having fun, exceeding [customers’] expectations with great service and quality products, while striving to be our employees’ best job ever. It’s a joy and a challenge to work toward that every day. We really do love sharing our farm and celebrating the seasons with our community. It’s an honor to carry on the tradition as our family business continues to grow and evolve.”

This year’s fall festival begins Sept. 17. For all the dates, plus ticket information, go to https://coxfarms.com. Work applications are at workingatcoxfarms.com.