Pay penalty for teachers in Virginia is the worst in the country. 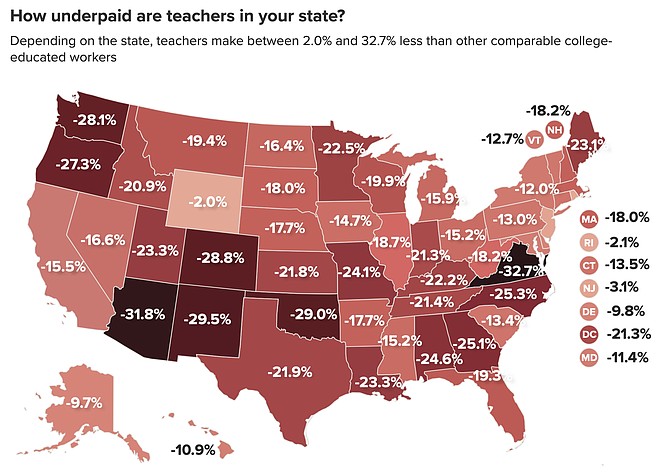 The Great Resignation is hitting classrooms across Virginia, worrying school administrators about what happens when fall arrives and schools are forced to deal with a teacher shortage.

Public school teachers in Virginia are paid 33 percent less than other college-educated workers, a metric that ranked the pay penalty for Virginia teachers as the highest in the country according to a report from the Economic Policy Institute. Add to that a lack of support staff that dates back to the last recession. More recently, teachers are dealing with pandemic-era burnout that's causing many of them to leave the profession in search of higher pay and better work environments.

"A lot of students suffered significant trauma during the pandemic when they were not in school buildings," said  Chad Stewart, a policy analyst at the Virginia Education Association. "Teachers in many ways are dealing with the fallout of that trauma with additional behavioral issues and the need for additional mental health supports that just haven't been adequate."

Here in Alexandria, teacher vacancies and staff vacancies are causing school officials to figure out ways to do more with less. According to the most recent data available from the Virginia Department of Education, Alexandria City Public Schools have more than two dozen teacher vacancies. Add to that more than 100 staff vacancies, and that leaves school administrators scrambling to figure out how they'll be able to get through the fall with a diminished team of workers and a student body suffering from learning loss during the pandemic.

"We've got to make a work environment where our teachers are respected, treated with dignity and honored," said Herb Berg, former superintendent of schools in Alexandria. "You cannot disparage hard-working classroom teachers in any way. They have to be respected for what they do. They do important work, and you've got to tell them it's important."

TEACHERS IN ALEXANDRIA earn an average salary of $78,000. Many teachers are taking a hard look at that number and wondering if they could make more money driving a truck or developing software. That's why alarm bells are ringing for teachers who are having second thoughts about their chosen profession. It's part of a broader trend known as the Great Resignation, a trend that started last year when workers abruptly left their jobs in the midst of pandemic-era economic uncertainty.

"There's a lot of improvement that teachers make in their skills over their careers, particularly over the first three to five years," said Laura Goren, research director at the Commonwealth Institute for Fiscal Analysis. "It's important that we keep teachers in the field rather than having folks leave after a few years because they want to be able to afford to raise their children."

Calculating the sweet spot for teacher pay in Alexandria requires looking at a number of factors. Because teachers are paid based on their level of education and their experience in the field, attracting teachers to Alexandria requires offering a wide array of different starting salaries based on where those teachers are in their careers. In addition to that, the cost of living in Alexandria is significantly more than the suburbs and exurbs around the metropolitan area. Plus there's the well-documented lack of affordable housing in Alexandria.

"You almost need a task force to really make sure they're looking at the totality of compensation for our employees," said Bill Campbell, former School Board member. "Unfortunately we have historically looked at things like step increases or bonuses. But we need to do better than that now and look at housing and starting salaries and how quickly you do your increases and bonuses."

EARLIER THIS YEAR, Gov. Glenn Youngkin signed a budget that included a 10-percent pay raise for teachers spread across two budget years plus a $1,000 one-time bonus in the first year. But that barely covers the cost of inflation for the way the Economic Policy Institute calculates the pay penalty. The ranking compares teacher pay in Virginia to the weekly wages relative to other college-educated workers. So the 32.7 percent pay penalty for teachers in Virginia means that people who have chosen that profession in that state make a third less than people with similar levels of education in other jobs.

"That's how much less on average teachers in your state are making compared to professionals in the state who are working in other professions and chose other professions beside teaching," said Sylvia Allegretto, a research associate at the Economic Policy Institute. "It could be that teacher pay is lagging or flat and the pay of other college graduates there is soaring. It could be that the pay of other college graduates is flat and that teacher pay is declining."

The most recent ranking, which was published in September 2020, looked at six years of data from 2014 to 2019. Next month, the institute will release the latest rankings which will use six years of data from 2016 to 2021. Once again, Virginia is expected to rank among the worst states for the teacher pay penalty. Since the number-crunchers at the Economic Policy Institute began releasing state rankings more than a decade ago, teacher wages and compensation rates have continued to erode compared to the weekly wages of other college graduates.

"Teachers are falling farther and farther behind," said Allegretto. "Why would anybody want to continue to dedicate their careers to teaching when they could just choose another occupation that's going to pay them much better?" 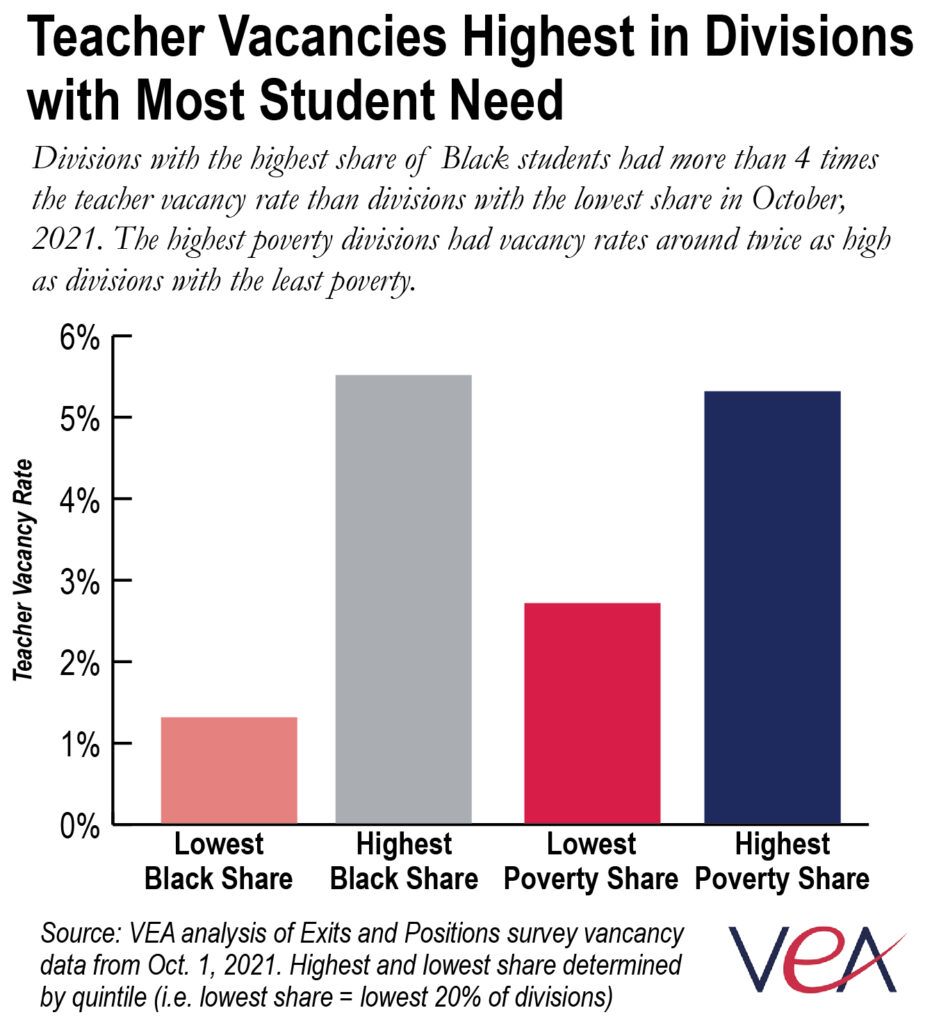