Alban Road in south Springfield will be closed at Accotink Creek bridge.

Beginning Aug. 13, drivers that use Alban Road to access points in Lorton or southern Springfield need to look at other options when traveling through this area when the Virginia Department of Transportation closes a section of Alban Road for bridge rehabilitation.

There are a few businesses along Alban that will be impacted and the word about the closure hasn’t yet gotten around. The residents on Mazzello Place, a residential street about 200 yards from the bridge, had not heard about nor had the manager of Crown Fried Chicken north of the bridge. “Lunch time is busy, this is not good for business,” the manager said. 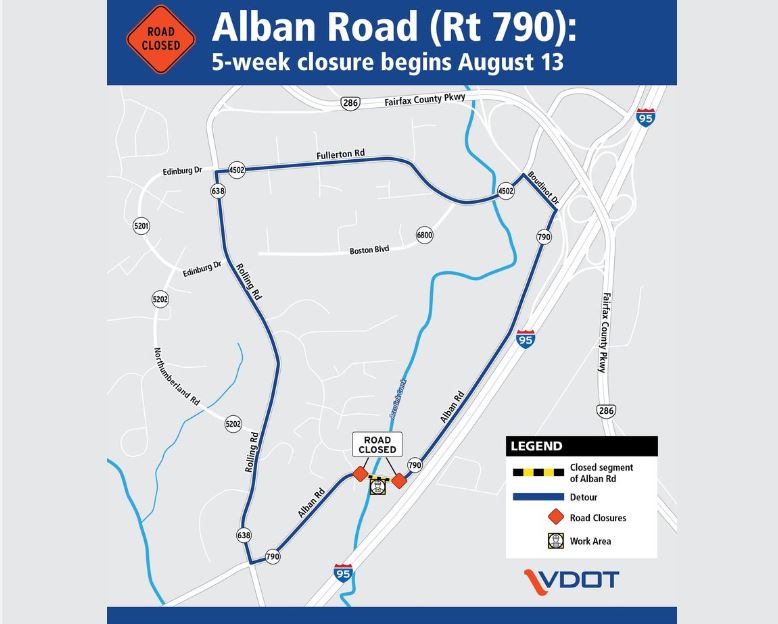 A few doors down at Bozelli’s Deli, Conner Feysa behind the counter overheard some customers talking about it. “Not that big of a deal,” he said.

This bridge was built in 1950 and repaired in 1991. Wear and tear from the crossing of 10,700 vehicles a day has caused some of the concrete to deteriorate, so VDOT will replace the concrete, reinforcing it with steel. VDOT plans to reopen the bridge in late September. Officials have not come up with a final price tag for this bridge repair.

This is not the first bridge in this area to undergo reconstruction. In March 2021, another bridge carrying Old Colchester Road over Pohick Creek in the Lorton area was reconstructed. It was falling apart and was part of a larger area of transportation assets that received a C-minus from the American Society of Civil Engineers.

VDOT has a "State of Good Repair," program that provides funding for deteriorated bridges in “Poor Condition,” or otherwise known as structurally deficient for bridges that are owned by the VDOT and/or localities, their information stated.

VDOT looks to rehabilitate, reconstruct, or replace deficient elements in the most practical and cost-effective manner and must also include measures to mitigate future deterioration. Bridge replacement projects are generally expected to be “in-kind” replacements. SGR funds are not intended to pay for increases of traffic capacity of a bridge or roadway.

The Office of Bridges and Structures manages over 610,000 highway bridges, more than 500 tunnels, and numerous other structures across the entire USA. Under the Federal-Aid Highway Program, FHWA annually distributes funding of approximately $7 billion to assist transportation agencies plan, design, build, repair, rehabilitate, and inspect such bridges and structures.

VDOT’s bridge reconstruction announcement comes right on the heels of over $330 million in new funding from the Northern Virginia Transportation Authority for construction on critical projects throughout the county, including the purchase of electric buses, widening of key roads, and commencing work on “The One,” the new Route 1 Bus Rapid Transit system. While this particular bridge is not part of that, transportation improvements have a trickling effect on the whole transportation picture.