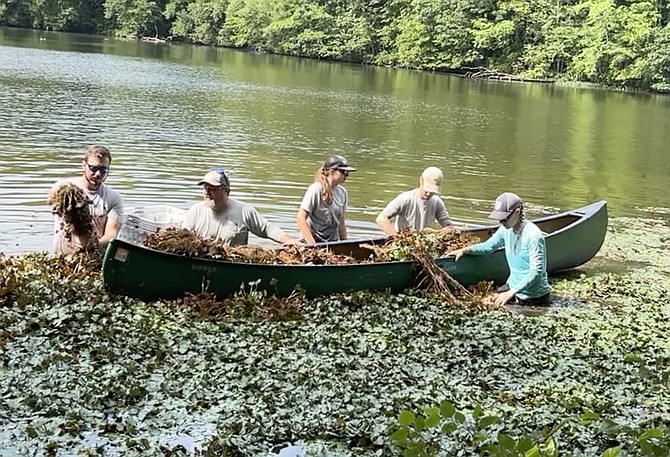 Describing the action of non-native invasive plants in the environment can sound like the stuff of a science fiction movie plot. The aliens land here from far away foreign lands and soon take over large territories since there are few effective natural weapons that can stop their spread. One of those aliens, not a movie character, spotted in Fairfax County is the water chestnut plant, Trapa bispinosa. The county’s manager of invasive plant management (IMA) Patricia Greenburg wants to prevent the nightmares this alien invader could create.

This year the county’s Board of Supervisors approved an $102,927 in the FY 2023-2027 budget “for the first phase of a three-year project to fund a multi-agency water chestnuts early detection rapid response control program.” Greenburg’s team and invasive plant management volunteers are working in collaboration with the US Geological Survey (USGS), Virginia’s Department of Game and Inland Fisheries, the Northern Virginia Soil and Water Conservation District (NVSWCD), volunteer groups and private landowners to control and eradicate the aquatic weed.

Game and Inland Fisheries employees, Park Authority employees, and volunteers met at Burke Lake Park on July 25 to remove plants found growing in Burke Lake. The plants are easily located and can be removed by hand-pulling. Some work crew members paddled kayaks to locate smaller patches of the plant along the lake’s long shoreline. Others waded from the shoreline near larger patches, collecting the plants in baskets, then floating them to shore. They also pushed large masses of plants closer to shore to speed the extraction process, and used canoes as collection and transport vehicles. Although their efforts were well timed to the plants’ growth cycle, some plants were found with the sharp horned nuts from which the plants reproduce. Those in the larger patches, with more established plants, were more likely to be found with the fruit.

According to the USGC, Water chestnut “is typically managed with hand-pulling or treatment with herbicides. In both cases, the ideal time to control the annual, aquatic plant is before fruits are produced. Management between May and early-July has been very successful in eradicating the plants, but it may take several years of effort if seeds drop prior to harvest or lay dormant.”

Northern Virginia Soil and Water Conservation District agrees and suggests “removal should be timed as flowers bloom. … For best results, harvested plants should be carefully removed from the water body to limit loose plant propagules and keep oxygen levels at natural levels.”

For larger patches, removal can be especially difficult. The Soil and Water Conservation District will provide management advice specific to the situation to property owners with large areas of impact. Designated funding also “will support engagement efforts with private pond owners and operators and the suppression of water chestnut plants at up to 30 infested ponds on property owned by the Park Authority, Homeowners Associations, or places of worship,” according to county budget documents.

Why not use herbicide for large patches?  Odenkirk, of Department of Game and Inland Fisheries, says, although proven safe for use in water, herbicides are very expensive and must be used multiple times. Therefore, if volunteers are available, hand-pulling is a much less costly means of removal.

Why should it be removed?  Water Chestnuts grow in dense, unsightly mats and impact the functionality and aesthetics of ponds, including those at stormwater facilities. As with other invasive species, its growth can block out native plants on which wildlife and the ecosystem depends.

The National Park Service advises, “Once established, it can reduce oxygen levels, increasing the potential for fish kills. It competes with native vegetation and is of little value to waterfowl.” The USGC notes large seeds even can cause painful injuries to people and animals walking in the water near the shore.

The first discovery of this particular variant, Trapa bispinosa var. iinumai, of the Water Chestnut in the United States occurred right here in the tidal area of the Potomac River in 2014. It was recognized as different from varieties previously found growing in the Northeast for about a hundred years, since the 1880s. This plant variant, believed only occurring in Virginia’s Potomac River watershed in the U.S., is recognized by its two-horned fruit; likely related to a variety from Taiwan. The species found in the Northeast has a four-horned fruit.  “Field surveys in local waterways showed that T. bispinosa had spread, unnoticed until recently, into private and public ponds, including a pond upstream of Pohick Bay. The barbed seeds can disperse long distances by floating or by adhering to the feathers and fur of wildlife,” as explained by the Maryland Invasive Species Council, which keeps watch for the plant in their waters. The U.S. Geologic Survey verified Trapa bispinosa in 33 Northern Virginia locations by fall 2018, and the number of sites has doubled each year for the last three years. All of the recent reported locations (2000 to 2018) are in Fairfax and Prince William counties.

What does the plant look like?  It’s an annual aquatic plant with both floating and underwater leaves forming a rosette pattern. Leaves are triangular and toothed, green above and reddish underneath. It bears a four petaled pink flower. The fruit, or chestnut, has a green exterior that disintegrates to show a nut-like seed with two sharp upper barbed horns and two lower false horns. It sprouts in April, can be seen on the water surface in May, with leaves forming a rosette pattern, flowering in June. Fruit can be found from June until a hard frost. The green fruit disintegrates when it falls into the water, revealing the large, hard, horned nut-like seed, up to two inches wide. The seed is edible; not the outer fibrous layer of the fruit.

The water chestnut’s fossilized seeds have been found in strata dating to the Eocene epoch, 33-to-56 million years ago, throughout China and Europe. It was used as a food source and as part of prayer offerings in the Chinese Zhou Dynasty. However in present day Fairfax County, alert residents can help eradicate it in local waters. Report sightings at https://nas.er.usgs.gov/SightingReport.aspx. Also watch for and consider participating in group volunteer removal efforts by various conservation groups.