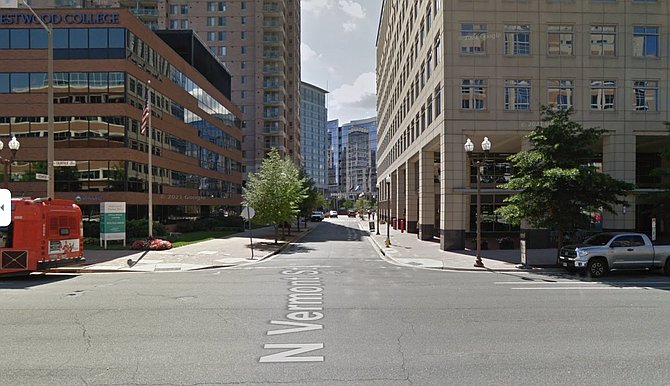 With the Northern Virginia Transportation Authority (NVTA) unanimous vote on June 14 to adopt the $624,882,714  FY2022-2027 Six Year Program, Arlington County, will receive $80 million in approved infrastructure project funds for the Ballston-MU Metrorail Station West Entrance. The funding for the expansion of the Ballston-MU Metrorail Station will build upon a previous request to NVTA, awarded in 2016 for design. The June 14 award is a component of the construction funding plan. The updated cost estimate for the Ballston West Entrance is $140 million, a $10 million increase over the 2019 cost estimate, according to Arlington County in its funding application to NVTA.

Arlington County's approved Board Agenda Item at its Oct. 16, 2021 meeting regarding its application to NVTA for the FY2022- 2027 SYP stated, "The project provides a second entrance to the station at North Fairfax Drive and North Vermont Street. This is almost a quarter of a mile west of the existing entrance, greatly expanding multimodal access to the station and providing greater capacity to and efficiency for Metrorail." The project will include two street-level elevators, stairs connecting to an underground passageway, and a new mezzanine with stairs and elevators to the train platform.

The FY2022-2027 SYP NVTA Staff Recommendations by Keith Jasper, Principal, Transportation Planning and Programming, noted that the "Long Term Benefit" requirement “explicitly” affected the Ballston-MU West Metrorail Station Entrance. Such led to the recommendation for full funding. Other factors included in the recommendation of funding for the project were "overwhelming public support, strong TransAction project rating, and modal/geographic balance," according to the NVTA staff recommendations.

Funding for the Ballston West Entrance is supported not only by regional funds from the Northern Virginia Transportation Authority but state funding and private developer contributions. The County Board approved local funds for the project, and the county is seeking additional state and regional funding to fund the project fully.

NVTA adopted the FY2022–2027 SYP, allocating nearly $625 million for the projects by a vote of its members that was both unanimous and nonpartisan. "That is just a very impressive thing to be able to do in this day and age," said Phyllis J. Randall, NVTA chair and Loudon County chair (D-At-Large), who spoke at a press conference Friday morning, July 15.

During the press conference, Monica Brockman, chief executive officer of NVTA, said that NVTA is in its sixth funding program. The passage of HB 2313 is the transportation funding bill. "We are looking at slightly over $3 billion ($3.12) in regional multimodal congestion relief solutions right here in Northern Virginia."

NVTA funds pedestrian and bicycle modes only if they lead to a more extensive transport system. "If there is a bike path that leads you to the metro, then that is something we will look at. But for NVTA overall, our first goal is to do congestion relief," Randall said.

NVTA's next Call for Regional Transportation Projects is anticipated for May 2023. Subscribe to NVTA's newsletters at TheNoVaAuthority.org