Honoring the service of war dead. 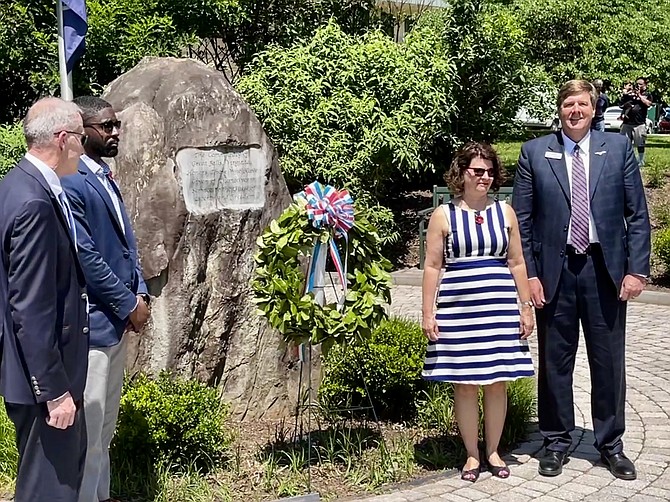 The Friends of the Great Falls Freedom Memorial hosted the Memorial Day Ceremony on Monday, May 30. The hour-long observance honored U.S. service members who gave their last full measure of devotion to their country as heroic war dead. In the invocation, Bob Newhall prayed, "There is no greater love than this, that a man would lay down his life for a friend … This morning ,.. we commemorate those men and women who, over the past two and a half centuries … paid the ultimate price to gain and secure our freedom."

Keynote speaker Lieutenant General (R) David H. Huntoon Jr., United States Army, said we pay tribute to our fallen United States military heroes on Memorial Day. They served from Conrad to Belleau Wood, Khe Sanh to Kandahar, and many other unnamed locations where time often forgets valor and loss. Huntoon spoke of a hallowed place of significant to him: the American Military Cemetery over the cliffs of Omaha Beach in Normandy.

"There, 9,387 Americans from our Armed Forces rest in honored glory... Another 1,557 are remembered by name on a memorial which marks the missing in action from the Normandy campaigns," Huntoon said.

To Huntoon, every headstone holds a story of sacrifice, loss, courage, and character. The headstones speak of "deep camaraderie and shared trust of military life."

"Trust underwrites many of the stories of valor and sacrifice," Huntoon said. He recalled that Section 60 of Arlington Cemetery is the gravesite of Specialist Ross McGinnis, killed in Iraq 16 years ago. Riding in the rear of a Humvee, McGinnis tried to deflect a thrown grenade, but it fell into the Humvee and lodged between the radios. No one else in the truck realized where the grenade landed.

"So instead of jumping out to save his own life, as he was trained to do, McGinnis threw his back against the radio mount, smothering the explosive with his body. He was killed instantly. All four of his fellow soldiers survived," Huntoon said.

For Huntoon, the headstones at Arlington National Cemetery and the cemetery in Normandy tell the meaning of trust and selfless service, a commitment to national values, and to each other. Huntoon thanked those assembled for honoring and remembering the courage of our heroes.

“Every day, we owe them our recognition of the sacred value of their selfless service, and we owe our country the same dedication they gave to its enduring principles, ” Huntoon said.