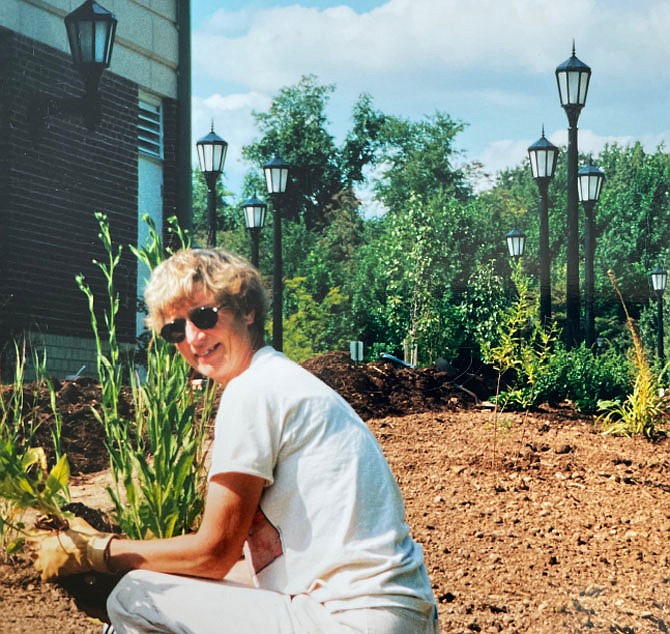 Longtime resident of Great Falls, Robin Ould Rentsch (formerly Sabin), died on May 30, 2022. She was 83 years old. Family members and friends recalled Robin as a Renaissance woman. They praised her adventurous spirit, talent in whatever she did, high intellect, and stunning beauty. But mostly, they spoke of Robin's compassion, drive, mentoring, and generosity, characteristics they will miss the most.

"Just call Robin, and she will fix it," her friend Christine Huffman recalled members of the Great Falls community saying. "But now there is no Robin to fix it. … She was a force to be reckoned with,” Huffman said.

Bill Marmon, Robin's cousin, said that she was his favorite cousin and that they had been close since they were little children when she lived in Roanoke and he in Richmond. Despite growing up in a sheltered Virginia setting, Robin somehow overcame it, according to Marmon. She developed a desire for adventure and mentorship. Marmon looked up to Robin as a role model. ARobin was fantastic at everything and was intelligent, fun, and beautiful, Marmon said, adding that every man who came within 6 feet of Robin fell in love with her.

Marmon recalled their childhood beach trips to Florida in the late 1940s and early 1950s. Robin's boldness in pushing boundaries was evident at a young age. Robin insisted on being "the king and being in command" while they played, Marmon said. "We let her. I was the prince, and my sister was the servant. We were pretty low on the totem pole."

Bill Canis of Great Falls said that Robin became one of his best friends. Canis first met Robin when he relocated to Great Falls in 1999. "I would even go so far as to say she was essentially a mentor to me in terms of becoming engaged in the community and a range of environmental issues," he said.

Canis told the story of how Robin organized a significant number of Great Falls homes to be Certified Wildlife Habitat by The National Wildlife Federation. "Robin researched and publicized this and promoted it extensively,” he said. According to the April 17, 2007 Connection story, Certified Community at Last, Great Falls became the “23rd community to achieve Certified Habitat Community status in the nation.”

“In an unprecedented one year, we were able to get certified,” said Rentsch in the story. “It was an amazing effort.”

Canis described Robin's commitment and activism for the native plant garden at the Great Falls Library. "She was instrumental in working with the Great Fall Garden Club to turn that from a mowed grass area into the Native Plant Garden it is today. ... It's a beautiful addition to the community," he said. According to Canis, Robin was “definitely out front,” and she wasn't shy if there were issues she thought the community should know. She was very articulate and brought them to the public's attention.

Robin was not above getting her hands dirty, even stepping forward to plant trees. They stand today in front of the Old Forestville Schoolhouse. "I still remember to this day that Robin grabbed the shovel from me and said, 'Look, I'm going to show you the right way to dig a hole for a tree,'" Canis said. “I captured it with my camera, and there's Robin digging the hole with the Girl Scouts watching."

According to Canis, the other thing that Robin did was place a conservation easement on her personal property. "It protects the property in its current state forever," Canis said.

Friend Christine Huffman said Robin volunteered an immense amount of time for Great Falls. She and Robin spent two days doing a census of the number of horses in the community to support the need for trails. "Robin single-handedly created the trail network that still exists," Huffman said, noting the trails are on county maps.

"I went with her a few times, and we walked in front of the tractor so the man wouldn't mow any turtles," Huffman said.

Christa Newton was Robin's lifelong friend. Christa described Robin as "extremely generous and kind,” housing families home on leave for several weeks. "That's a lot to offer, but she did it gladly," Newton said.

Asked what she would miss the most about Robin, Newton said, "Her generosity. I miss her intelligent mind. It was incredible ... I loved her dearly. We all did."

Robin is predeceased by her brother, Edward Hatcher Ould III, and her husband, Samuel Burton Rentsch. A celebration of life will be held in the fall. Instead of flowers, donations may be made to the Alzheimer's Association or the Nature Conservancy.