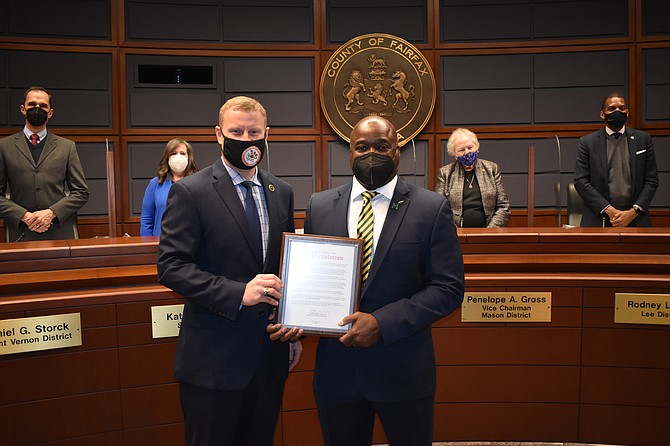 George Mason University's president Dr. Gregory Washington, received a proclamation recognizing the university's 50th anniversary. Fairfax County Board of Supervisors Chairman Jeffrey McKay presented the proclamation to Washington on behalf of the board at its public meeting on Feb. 22, 2022.

"I know I speak on behalf of all our county residents in expressing our appreciation for the university and the partnership. The strong bond that we have in the county with George Mason University, we're so proud of," McKay said.

George Mason University is the Commonwealth's most diverse, fastest-growing, and largest, public, four-year institution, with 39,134 students, 10,895 staff and professors, and more than 215,900 alumni.

McKay said he wished the university 50 more years of tremendous success and growth. He noted how the institution rises above others. "I think it is fair to say that public universities and colleges throughout the country are looking at different ways to respond to an ever-changing population and needs that are out there," he said. Many are looking at GMU as a model to pivot their academic and professional opportunities.

According to Walkinshaw, sometimes having a university in a community also creates challenges. But what he appreciates most is Washington's commitment and his team's commitment to working collaboratively with the community. “[They] discuss those challenges and overcome them together so we can fully take advantage of the many opportunities that George Mason creates for our community," Walkinshaw said.

Supervisor Patrick Herrity (R-Springfield) called attention to GMU's Nobel Prize-winning instructors, NCAA Final Four appearances, new law school, and recognition as a top-tier research institution to help the region’s innovation. "For decades, you've been an invaluable partner with our schools, our students, and athletes, mentoring and volunteering with our students, hosting our high school graduations, serving as a mass vaccination site, serving as a partner with the Osher Lifelong Learning Institute."

"As we look to the future, the best is yet to come… And as I've heard you say many times, it's Mason time," said Herrity.