Burke’s own Jeopardy! National College contestant, Megan Sullivan, emerged with a win in her first televised Jeopardy! quarter final match on Feb. 16. (See Connection, Feb. 8). With a winning score of $8,401, she advanced to the Jeopardy! semi-finals. At watch parties on her University of Virginia campus, and at those hosted by her parents in Burke, the excitement level ran high, encouraged by her win. 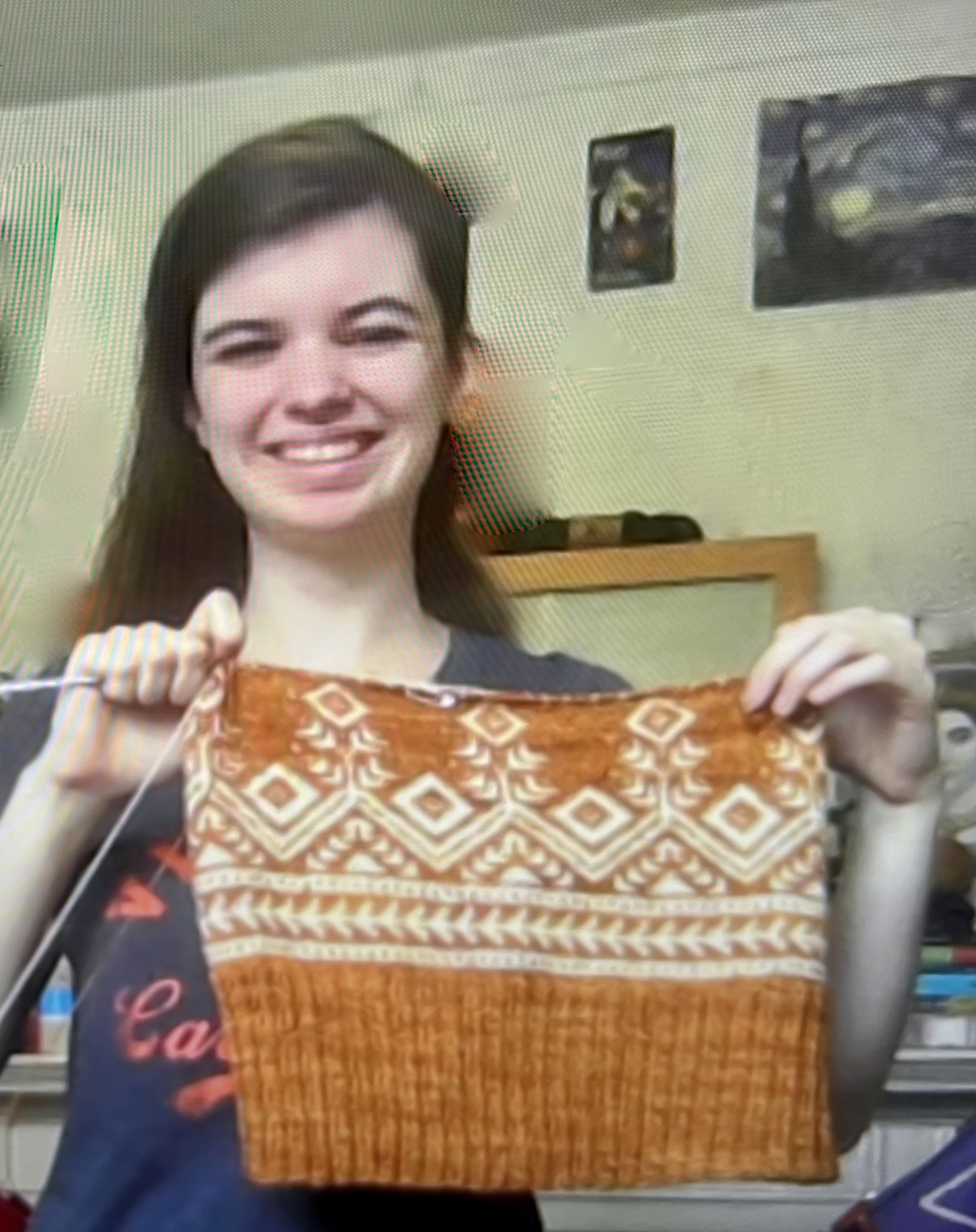 Sullivan relaxes from the activity of school and celebrity by knitting

On Feb. 18, as she competed in her semi-final match, Sullivan’s combination of knowledge, gamesmanship, and wagering strategy, allowed her to perform very well. She found herself in the lead going into Final Jeopardy. She was hopeful when the final Jeopardy category, literature, was announced. As a junior studying the Classics, literature is a strong area for her. Unfortunately, the other important ingredient - luck - was not with her for that final question. Answering “Who was Madame Bovary?”, instead of “Who was Lady Chatterly?”, she finished second to Jaskaran Singh, who was the only one of the three contestants answering the final question correctly.  Madame Bovary’s 1856 character lived beyond her means to brighten a dull provincial life in Flaubert’s novel first published in France; while Lady Chatterley’s character sought the escape of physical pleasure in D. H. Lawrence’s 1932 novel first published in Italy.

Sullivan said, “When I read the question, it was so frustrating  because after the responses were read, I knew that with one more piece of intel, like the author’s name, I would have gotten it right. Madame Bovary wasn’t a bad guess, but I knew the era was totally wrong. I’m familiar with the book but I haven’t read it.”  She added with a simile, “I will now.”

Although she didn't make it to the finals, Sullivan said, “I was proud because I think I played much better in the semi finals, especially coming so close to unseating the champion in the whole tournament [Singh].”

Singh, a senior at the University of Texas, ultimately would be crowned the 2022 National College Champion, winning decisively on Feb. 22, with a commanding score in the first of the two final games, and holding on in the second to earn the win and the $250,000 prize.

What is it like to be a Jeopardy! winner? Sullivan has been surprised to be recognized often in public. She also says the celebrity has added to her work load, answering many emails and texts and doing promotions on social media. She has been invited as a surprise guest at a campus class Jeopardy game. Through the added excitement, she still finds time for her favorite hobby, knitting. She is working on a shirt, elaborately patterned, inspired by the epic poetry of Finnish and Karelian folklore, the Kalevala, which she finds fits with her interest in the Classics. She is using an expensive hand-dyed yarn, and she says, “I can afford it now.”

Speaking of her prize money, she says, “I’m sort of in that college age gap between dependence and independence, so this is a really good time to be handed a big chunk of change. As I prepare to go to grad school and live on my own. It’s going to mean that I'll have to work less while in grad school.”

What’s next for University of Virginia’s newest celebrity?  Sullivan has more college and graduate school to complete. She then hopes to find an enticing location to begin a career as  a high school Latin teacher. She feels assured that openings await her given the number of teachers in that curriculum reaching retirement age.

As an avid knitter, she’s also calculating just how much more yarn she might purchase with her prize money.

“I have some more yarn purchases in the future.”