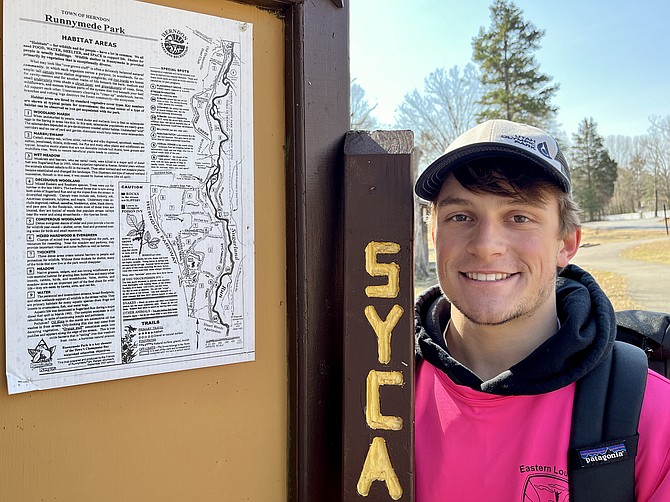 Eagle Scout candidate Ryan Lindley of BSA Troop 2970 stands beside a Town of Herndon Runnymede Park map noting its trails. In his hand is a new trail sign, part of his Eagle Scout project.

The Eagle Scout service project is often based on a particular experience in which the Eagle Scout candidate is deeply invested. For Ryan Lindley of BSA Troop 2970 in Loudoun County, cross-country running is a passion. "I love to go trail running," Ryan said. When asked why he picked the Town of Herndon's Runnymede Park and trail sign replacement as his project, Ryan said, "Knowing where you're going when you're running is important." Ryan had been aware of the damaged signage. 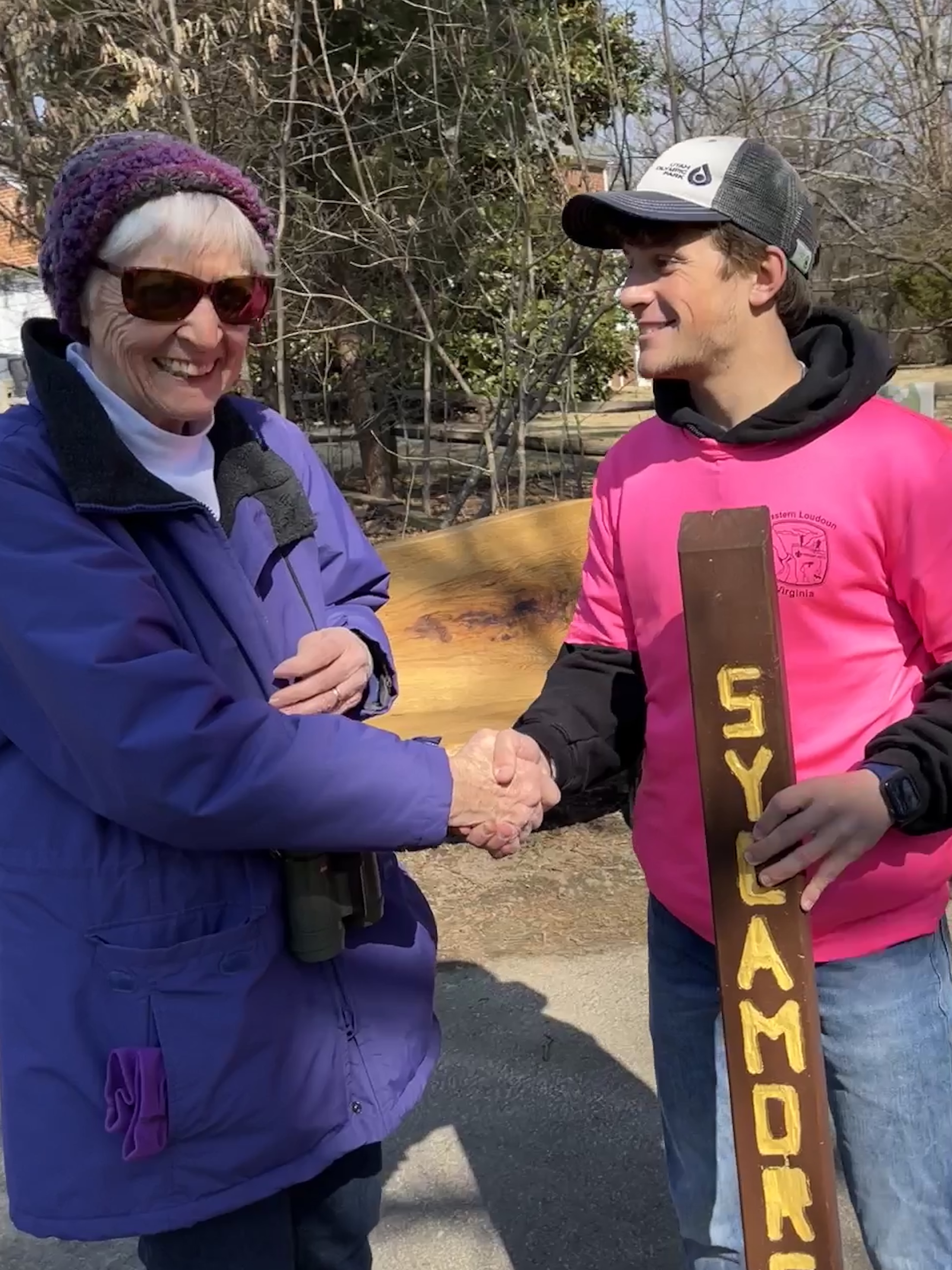 Carol Hadlock, president of Friends of Runnymede Park, and Eagle Scout candidate Ryan Lindley of BSA Troop 2970, as he and his service crew complete sign replacement work at the park.

According to Section 9.0.2.5 of the BSA Guide to Advancement, Eagle projects must be "beneficial to any religious institution, any school, or your community." The guide emphasizes that "your community" is not limited geographically solely to local residence-based.

By mid-morning March 5, the park's deteriorated trail markers lay in a pile. Ryan’s service construction team was dismantling the existing signs and replacing them with new ones. Ryan was in charge of the work assignments for 18 people, and their service was expected to last three or more hours. Ryan estimated that this part of his Eagle Scout project would take about "100 service hours."

Carol Hadlock, president of Friends of Runnymede Park, watched. "We've been waiting for new signs for a long time. We're just thrilled that it's finally happening," she said.

Ryan's father, Eric Lindley, was nearby, working under the supervision of his son. "I'm very proud of Ryan. He invested a lot of time and energy into planning this out, working with different people to line up the materials and funding," Lindley said. Ryan has a lot of friends that are here helping him, and it's great to see it come together."

Ryan approached a park map prominently detailing the many trails. According to Ryan, before people went out on the trails, they could photograph the map with their mobile phones or go to the Herndon Parks website and download the Runnymede Park Map PDF. The newly installed markers would tell them where they were on the sometimes circuitous trails.

Hadlock looked at the new signs. "We're very happy to be contributing to the cost of this project," she said on behalf of the Friends of Runnymede Park. "The Scout is supposed to do fundraising, but we thought we'd help. We voted to go halfsies on the cost," she said.

Ryan fulfilled the Scout oath "to help other people" and did so more expansively than in his backyard of Loudoun County. Local organizations and businesses  in the Reston-Herndon area responded in kind and supported Ryan and his Eagle Scout project.

Runnymede Park is located at 195 Herndon Parkway, near the Fairfax County Parkway. It is adjacent to Reston. Hiking, birding, nature study, and picnics are all permitted in the 58-acre park, accessible from dawn to dusk. Sugarland Run Trail and other paths run through the area, with the park's primary trails being asphalt, gravel, or a natural surface. The paths are made of natural materials such as gravel and mulch.