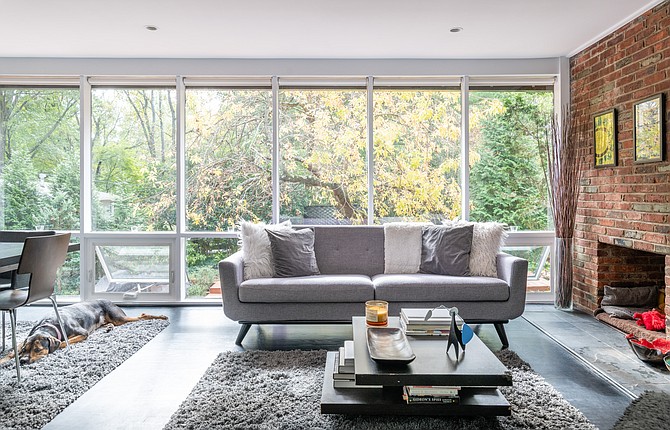 “Charles Goodman, both as an architect and as a planner, because he was both, created something very, very special,” said Ulfelder. “He influenced a lot of young architects at the time.”

Following a public hearing on Wednesday, Feb. 23, the Planning Commission voted to support designating Hollin Hills as a Historic Overlay District. The Fairfax County Board of Supervisors formally approved the designation at its next meeting this past Tuesday, March 8, 2022.

The Historic Overlay District would provide an added layer of protection for the design integrity of the neighborhood.

“Under the Historic Overlay District regulations, these installations would require review and approval by the Architectural Review Board prior to construction within the district's boundaries,” according to Chairman Jeff McKay.

THE NEIGHBORHOOD was already listed on the County Inventory of HIstoric Sites in 1972 and the National Register of Historic Places in 2013.

“We’ve had a lot of support for this application,” said Walter Clarke, Mount Vernon Planning Commissioner.

“The [Historic Overlay District] is really critical to protect Hollin HIlls both as a historic resource and as a community,” said J.G. Harrington, resident of Hollin Hills. “We’re seeing increasing pressure on mid-century construction all around us and developers realize the houses are relatively small as compared to the lots and see opportunities. All around us we're seeing tear downs and much larger houses being built that are not like the houses that were there before.”

“We see what is going on in surrounding communities where houses that are on lots our size or even smaller are being knocked down,” said Barbara Ward.

THE NEIGHBORHOOD began the process of exploring HOD designation back in 2017, having small group conversations in people’s houses, and then “literally going door to door,” said Patrick Kelly, president of the Civic Association of Hollin Hills.

“It’s not the past that we’re concerned about, it's the future. And we do worry about future development and what it could potentially do to Hollin Hills,” said Kelly. “We really are looking forward to the support of the Architectural Review Board that will allow some more protection for us in making sure that future renovations can still be innovative and unique but conforming with the Goodman original idea.”

This is how Hollin Hills describes itself: ”Nestled into a rolling, park-like setting, more than 450 mid-century modern houses seem to float weightlessly in a canopy of trees. There are no traditional suburban houses here, and few fences or barriers of any kind. Instead, the houses — with walls of glass and clean, geometric lines — perch lightly and naturally in the wooded hillsides, as if they were part of the landscape itself,” according to its website.

“This area is magnificent not only in its unique architecture but in its layout and the aesthetic beauty of the forestry and vegetation around it. It’s all integrated which just makes it fascinating,” said Planning Commissioner Timothy Sargeant, at-large Planning Commissioner.

“Action on the [Historic Overlay District] is really critical for Hollin Hills to maintain our community, to maintain the integrity of what we have,” said Harrington.

The historic overlay district designation will ensure that county planning staff and the architectural review board will also have to approve applications.

One caller told the Planning Commission to know that he didn’t want Hollin HIlls to become a living museum.

“The HOD designation will permit Hollin Hills to preserve its mid-century modern architectural integrity while allowing for the architectural evolution of the community as it confronts the needs to incorporate new building methods and materials, the residents evolving housing requirements which the pandemic has accelerated, and responds to changing climate and environmental design issues,” said Ward.

Mount Vernon Supervisor Daniel Storck created a Hollin Hills Historic work group four years ago, and then conducted a poll to determine the neighborhood’s interest in having the designation. About 82 percent of households responded to the survey, more than 62 percent supported it.

The Board of Supervisors authorized the planning department to study the possibility of creating the historic overlay district in July 2018.

“When you go to restrict what people can do with their property, you need to do that very carefully and very deliberately, and you need to make sure you brought into that conversation all different kinds of perspectives,” said Storck at the March 8 meeting.

Ward said the community has had at least 13 meetings on the designation, articles printed in the community newsletter and “endless discussion on our neighborhood forum concerning this proposal.

“I doubt that there is any person who lives in Hollin Hills who is not fully aware of what is going on,” said Ward.

”Nestled into a rolling, park-like setting, more than 450 mid-century modern houses seem to float weightlessly in a canopy of trees. There are no traditional suburban houses here, and few fences or barriers of any kind. Instead, the houses — with walls of glass and clean, geometric lines — perch lightly and naturally in the wooded hillsides, as if they were part of the landscape itself.

“The place is Hollin Hills — one of the most beautifully-designed and well-preserved modernist communities in the United States. Built between 1946 and 1971, it was the brainchild of developer Robert Davenport and architect Charles Goodman, visionaries who wanted to bring a bold new approach to housing in America — and who believed that modern architecture could foster both community and, as Goodman put it, ‘the flowering of the individual.’

“Davenport and Goodman turned these wooded hills into an ‘architectural laboratory,’ creating a community both strikingly modern and utterly natural. Pared to an elegant simplicity, the houses have wide expanses of floor-to-ceiling windows to erase the line between indoors and outdoors, while the light-filled ‘open-plan’ interiors create a sense of freedom and space.

“And the architecture’s integration into the steep terrain remains particularly striking. The houses don’t try to dominate the landscape — they embrace it. Rather than being laid out on a bulldozed grid, the streets follow the natural flow of the hills, with the houses set at unique angles to enhance views into the trees. Fences are rare, and each property flows freely into the next, tying the community together into a green and park-like whole.

“Now, seven decades after its founding, Hollin Hills remains a masterpiece of  modern architecture. The winner of numerous design awards, it’s had a lasting impact on postwar American housing and is listed on the National Register of Historic Places. But it’s also a vibrant, living community of creative people in almost every field, from architects and writers to lawyers and physicians, drawn by the beauty of the architecture and the imaginative freedom it seems to represent.”