Spies, Sputnik and Other Secrets in Huntley Meadows Park
Votes

Spies, Sputnik and Other Secrets in Huntley Meadows Park 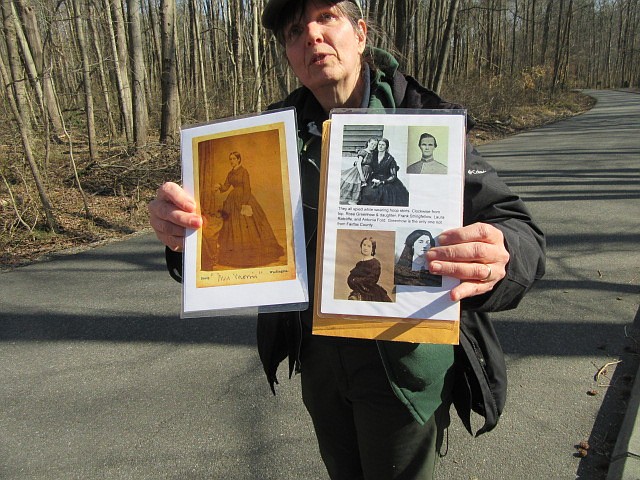 At Huntley Meadows Park, the raccoons, snakes and skinks hide undercover to avoid detection. The park has a hidden human side too, Cheryl Repetti told a group on a Feb. 28 walk on the park’s west side.  Repetti is the Historical Interpreter and Site Coordinator for Historic Huntley.

Northern Virginia’s proximity to the nation’s capital has attracted foreign and domestic spies over the years, starting with George Washington’s Revolutionary War espionage network. In a Mount Vernon Museum video, an actor portraying a post-war Brit says that the Americans did not “outfight us, they outspied us,” Repetti recalled.

During the Civil War, Augusta Heath, also known as Ada Hewitt, a woman who called herself “Mrs. Morris,” mentioned “Huntly” in her letters from prison after she was arrested for alleged espionage against the United States. This was a reference to today's Historic Huntley, the 15-room country house, acquired in 1820 by Alexandria’s mayor, Thomson Francis Mason, grandson of Gunston Hall’s George Mason IV. The Masons likely retreated to their villa to decompress from city life and enjoy the hilltop breezes and view of their 800-plus acres.

Mrs. Morris claimed she had married Thomson and Betsey Mason’s son, John Francis “Frank” Mason, and had a child with him in Paris.  In prison, Mrs. Morris confessed to being a Confederate spy and in her letters to Frank, hinted that her mother-in-law was a Union sympathizer.  Alexandria and that part of Fairfax County were then under Union occupation. She wrote, “‘Huntly has not been touched. All this goes to prove your mother’s position is very well understood here by the Lincoln Government.”

While no one has documented that the ever-resourceful Mrs. Morris visited Huntley, records show she met Confederate President Jefferson Davis. An 1872 letter by “X” to the Alexandria Gazette lauded her mastery in covert operations. “Of her powers of fascination there can be no question, statesmen and warriors having surrendered at discretion to her charms of form and intellect,” X penned.  With her duplicitous wiles, she obtained Union General Irvin McDowell’s plans for the 1861 march on Manassas Junction, wrote the plans in code, wrapped the document in black silk and hid it in her hair bun, said Repetti. Her accomplice slipped the plans to Confederate General Pierre G. T. Beauregard.

In 1872, Mrs. Morris testified in the U.S. Senate when some alleged that an unauthorized sale of U. S. arms to France violated U.S. neutrality in the Franco-Prussian War. She was also connected to an insurrection in Cuba. 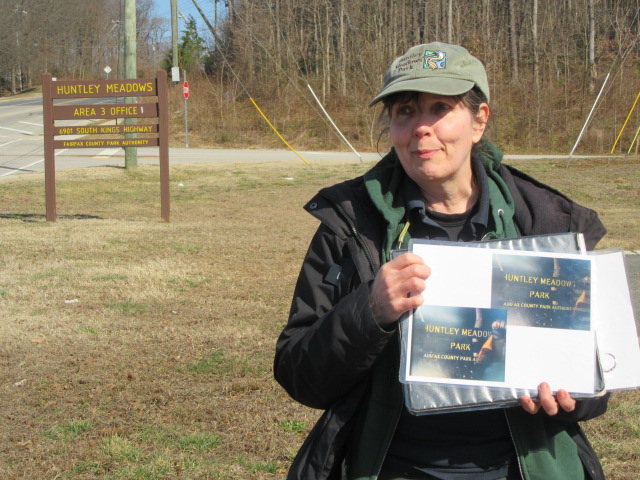 During World War II, three damaged U.S. B29 bombers were forced to land in Soviet territory. Stalin ordered his underlings to dismantle and copy them. This generated anxiety among high-level U.S. officials, so to strengthen U.S. defenses, the Army built anti-aircraft sites armed with guns near major cities. The Virginia National Guard Battery D had 134 men who staffed a site at today’s Huntley Meadows and operated four 90- and 120-millimeter, anti-aircraft guns. Today, the facility’s sidewalks and other concrete remnants peek out from the forest floor.

In the 1950s, as Cold War tensions mounted between the U.S. and the Soviet Union, new surface-to-air missile defense systems made antiaircraft guns obsolete and the Navy decommissioned the Huntley site. The Pentagon then circled Washington, D.C., with 13 Nike anti-aircraft missile complexes. Fairfax County had three, one near Lorton today which has a historic marker declaring, “This was the only Nike complex in Fairfax County containing missiles armed with nuclear warheads.” 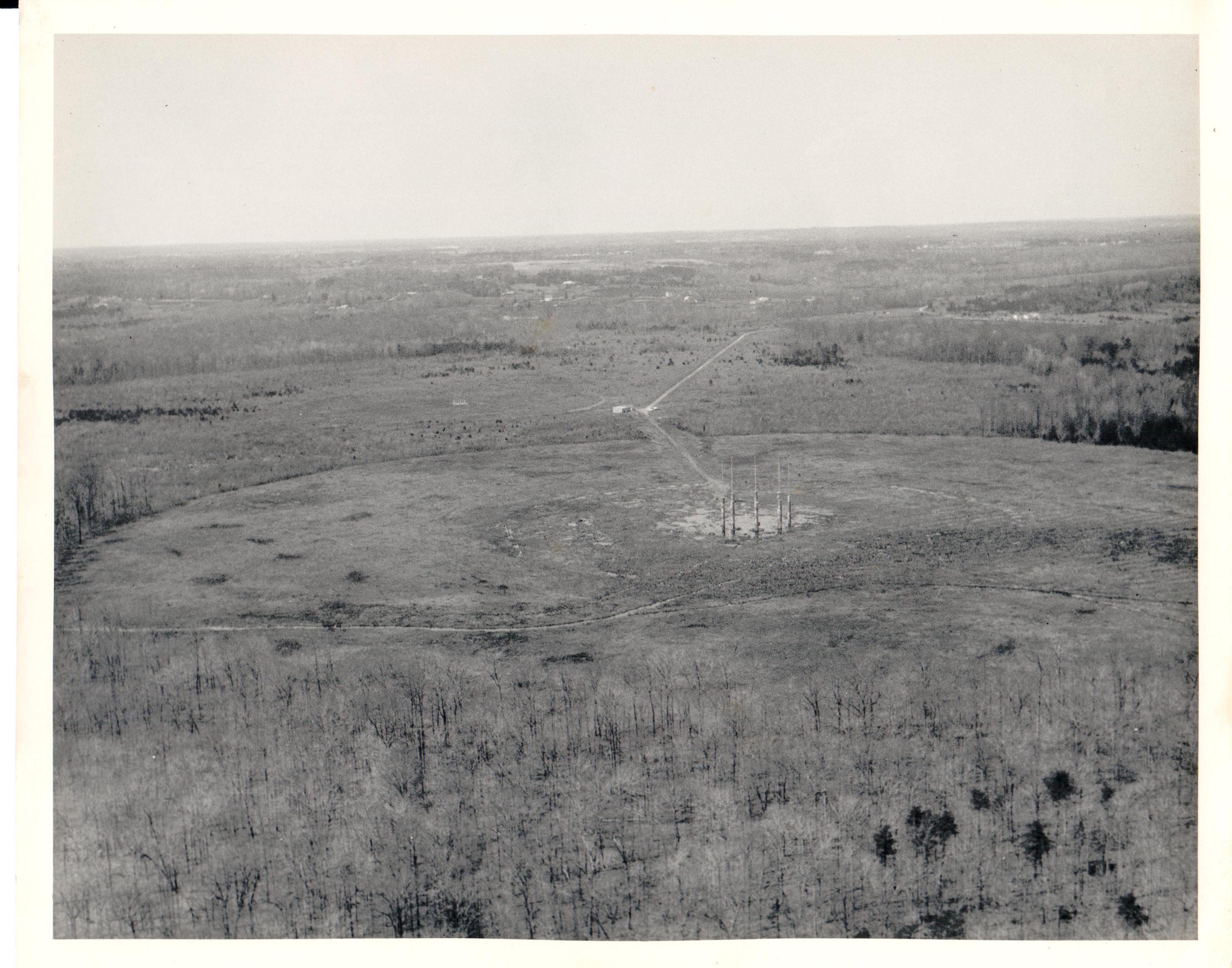 Ground-level view of antenna array at Hybla Valley Field Station,  1958. Today, this is the central wetland at Huntley Meadows Park.

Birds chirp in the park today. For 20 years, hush-hush technology chirped. Wires poking out of the ground today were left by the Naval Research Laboratory’s (NRL) Hybla Valley Research Station, which from 1958 to 1971 conducted classified radio communication research and built top-secret antenna arrays organized in two circular fields to track signals from Soviet submarines off the Atlantic coast.

The site of a former circular antenna array is today’s central wetland, created in 1978 when beavers built a dam. Severe droughts in the wetland can expose metal pieces and parch marks showing ground disturbance.

In 1957, the Soviets launched Sputnik I, a beach-ball-size, artificial satellite that orbited the Earth in about 98 minutes, beating the U.S. in that era’s “space race” and sending shock waves across America. Hybla Valley NRL radio employees tracked Sputnik’s orbits. Many say that Sputnik led to the U.S. space program.

In the early 1960s, today’s park was also the site for a Naval Research Laboratory command and control station for the U.S. government’s GRAB (Galactic Radiation and Background) satellite, a signals intelligence satellite first launched in 1961, shortly after the loss of the U-2 spy plane flown by Gary Powers in 1960. Powers was performing photographic aerial reconnaissance in Soviet territory. According to the National Security Agency’s website, GRAB’s unclassified mission was to collect solar radiation data. Its secret mission was to gather “radar pulses within a specific bandwidth from Soviet equipment,” data ultimately sent to the Strategic Air Command and NSA. The Naval Research Laboratory’s work on GRAB eventually led to the Global Positioning System (GPS) today found in most cell phones.

From 1943 to 1953, the then federal Bureau of Public Roads tested asphalt to determine its capacity to support heavy vehicles. This work may have been security related, for example, to develop pavement to support tanks.  Parts of the oval track, still there, are now in the park’s maintenance area and closed to the public.

Today’s Green Spring Park and mansion near Annandale were the former farm of Michael Straight who while working for the Franklin Roosevelt administration spied for the Soviets’ security agency, until 1991, the KGB. He had joined the Communist Party as a student at England’s Cambridge University. The Straight family donated Green Spring Farm to the Fairfax County Park Authority. Straight’s second memoir, On Green Spring Farm: The Life and Times of One Family in Fairfax County, Va., 1942 to 1966 was published posthumously.

Parks have been favorite drop-off sites for clandestine operations. The county’s sign for Foxstone Park is in Washington, D.C.’s, International Spy Museum.

Robert Hanssen worked for the Federal Bureau of Investigation from 1976 to 2001 and for most of that time, also worked for the Russians as “Ramon Garcia.” He left papers and cash at dead drop sites in Fairfax and Arlington parks, including Eakin, Idylwood, Canterbury Woods, Lewinsville, Wolftrap and Foxstone.

Hanssen gave each park a code name and signaled drops with inconspicuous materials like adhesive tape, thumbtacks and colored chalk.  He made his last drop at Foxstone near his Vienna home in 2001 as FBI agents watched him tape classified material packaged in black garbage bag to the underside of a footbridge over Wolftrap Creek. Reportedly, he said, “What took you so long?”

Most of the Huntley Meadows Park sites are accessible today from the trail at 6901 South Kings Highway. Historic Huntley, 6918 Harrison Lane, is near the park’s Lockheed Boulevard entrance.