Pulling farmed trout out of an urban restored stream. 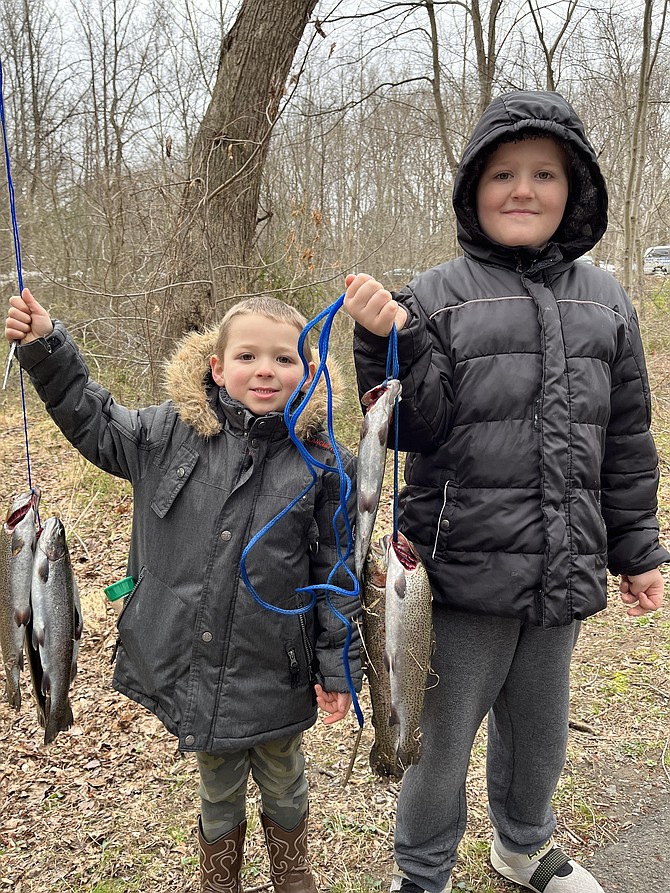 One hour after Kids Fishing Day 2022 begins in Reston, the Farley boys, Wesley, 4, and James, 8, have yet to be out-fished.

In the 1970s, fishers could catch brook trout in Difficult Run located in the north-central portion of Fairfax County. In 2022, the brook trout are gone, yet within the run's watershed is Lake Audubon on Snakeden Branch. Reston Association (RA) recently stocked the stream with hundreds of hatchery-raised rainbow trout.

On Saturday, March 26, children and youth 3-15 years of age accompanied by adults made their way to Snakeden Branch stream in Reston for a morning of recreational sport fishing for rainbow trout (Oncorhynchus mykiss).

According to the Virginia Stock Trout management Plan (2016-2025), urban fishing may attract new anglers. It provides opportunities children and youth may not otherwise experience. That was the case for William, 6, of Reston, who pulled in his first fish ever that morning. 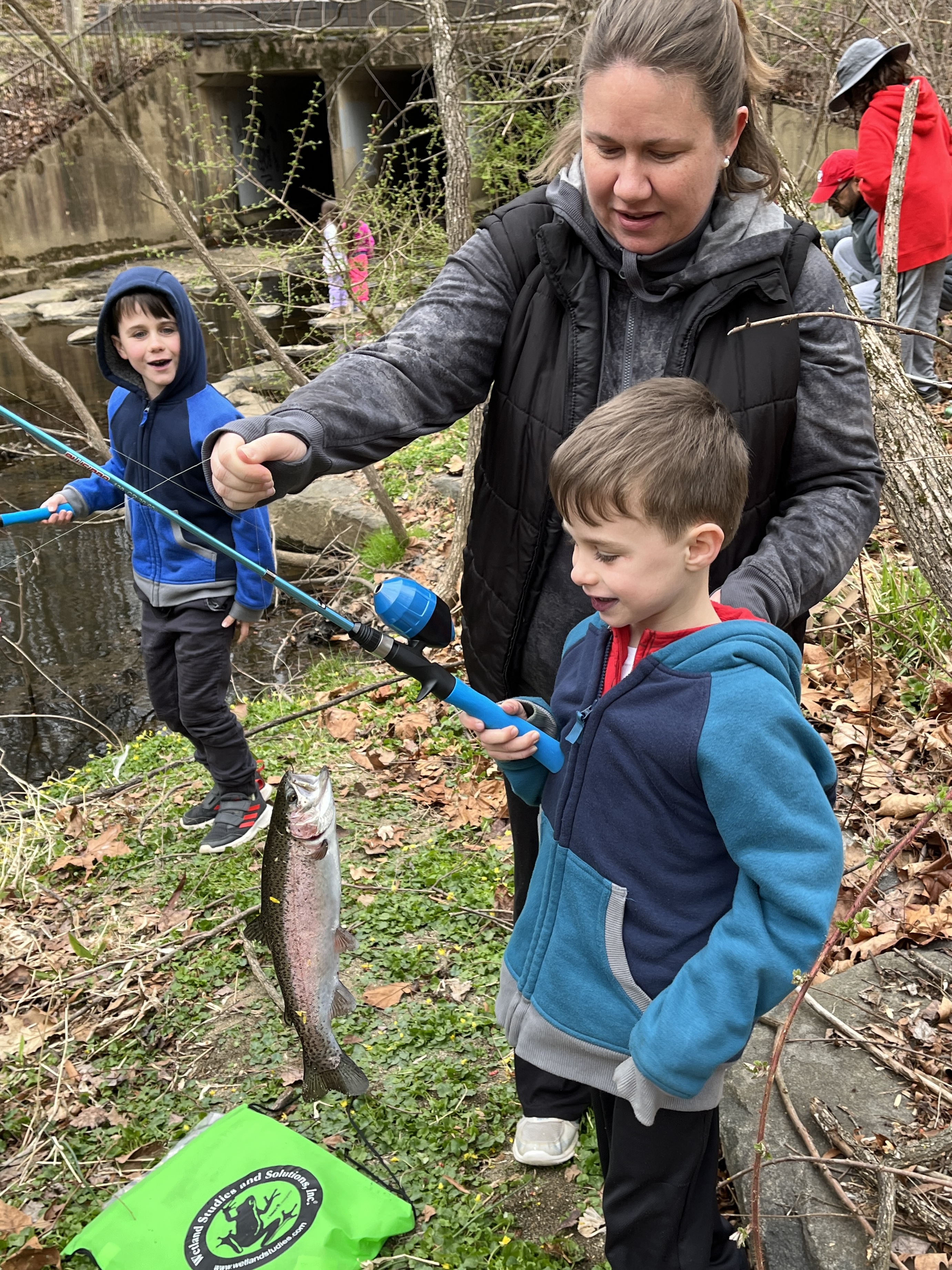 Memory made with family; William, 6, of Reston, catches his first fish ever.

Downstream, Wesley Farley, 4, and his brother James, 8, had yet to be out-fished. They showed off seven trout between them. James said his secret was the Trout Magnet™. It is a cone-shaped jig, fixed with a tiny, grub-shaped, soft-plastic body and a split tail. Rigged, the lure is 1¼-inches in length. "I cast my line into the riffles and caught four," James said. Wesley proudly held up the three trout he caught. Kyle Kidd, who accompanied the boys, said he planned to smoke the day's catch.

RA waived fees for program participants, thanks to the support of sponsors, and provided all the equipment, loaner rods, bait, and catch bags at no charge. Wetland Studies and Solutions, Inc. and Trout Unlimited members voluntarily cleaned the caught trout.

Cooler water is ideal for trout. Research suggests an optimal feeding range for rainbow trout is water temperatures ranging from 52 to 64 degrees. The warmer the water gets, though, the less oxygen it contains. Trout become physically stressed when the water temperature increases. Inevitably urban streams get too warm, and the trout die.

When the water begins to warm, trout migrate to the cooler waters of deep pools and areas with shade. They settle near turbulent riffles and behind waterfalls where the water is oxygenated. The hatchery-raised rainbow trout introduced to the Snakeden Branch stream should survive until the water temperature rises above 75 to 77 degrees, according to Mark Headly, operations manager, Wetlands Studies and Solutions, Inc., a Davey Tree Company. Headly said the rainbow trout released into Snakeden Branch Stream could easily last until May or later. "They tend to go downstream. They could be in Lake Audubon and stay in the cooler water there," he said.

Headly recalled that when he moved to Northern Virginia in the 1970s, they were still monitoring native fish streams. "There were native brook trout in Difficult Run. Over time as the [Difficult Run] watershed developed further, whether you want to say climate change had something to do with it, the water became too warm for the trout. That is the biggest thing." 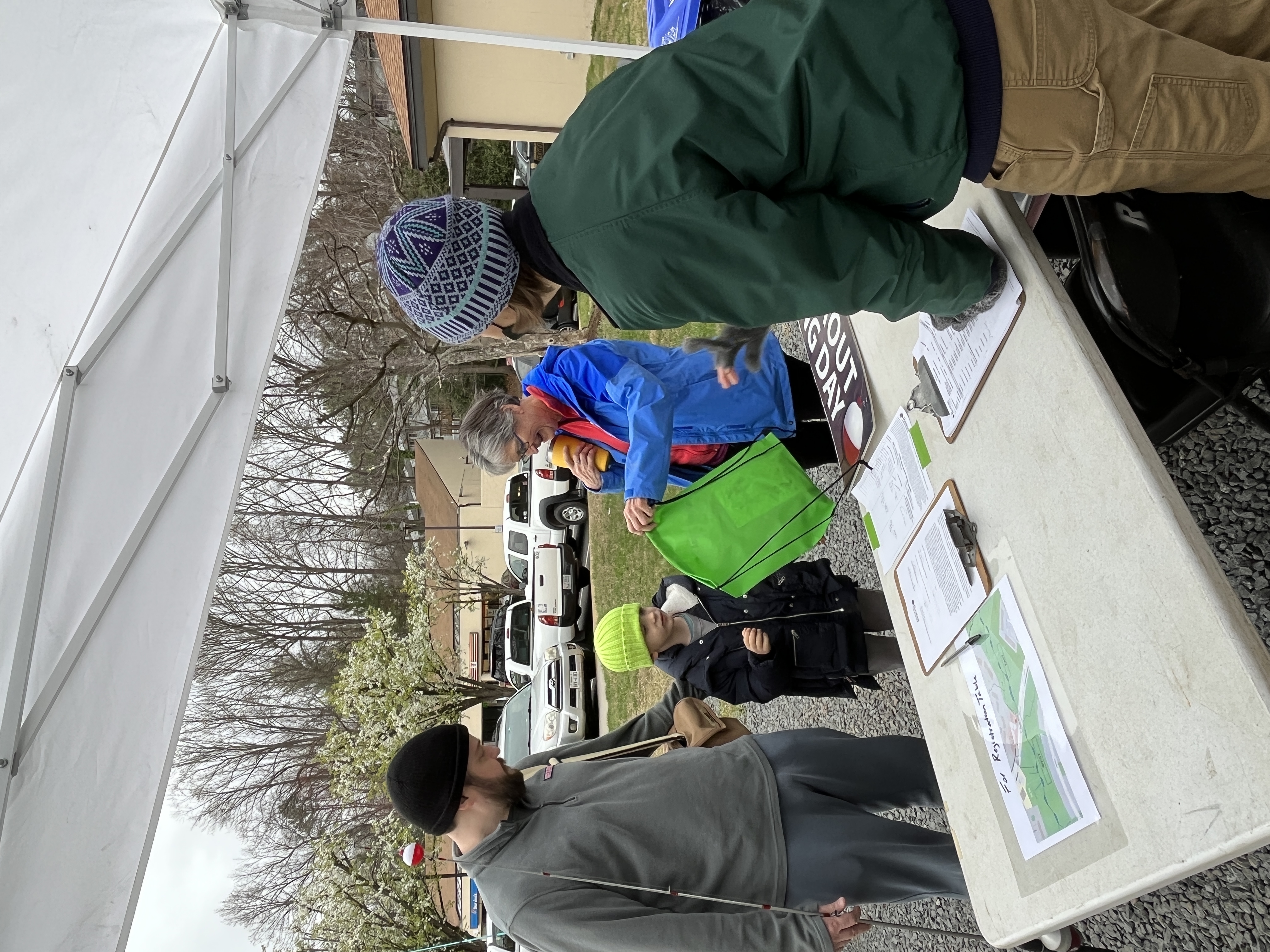 The Snakeden Branch stream did not look as it does in 2022 compared to the early 2000s. Erosion of the urban stream's bed and banks had exposed buried utility lines and tree roots, causing healthy trees to topple. It damaged adjacent walking trails according to the Wetland Studies and Solutions, Inc.,  Stream Restoration in Fairfax County, VA.

Headly said Snakeden Branch had been eroding because it could not get out of the channel. One of the benefits of the restoration is that it raised the water table. "We have actually increased the wetlands present in the floodplain since the stream restoration has been done," Headly said. According to Wetland Studies and Solutions, Inc, all reaches, given sections of the stream, have met and exceeded monitoring requirements.

"Like other trout species, the rainbow is an opportunistic feeder, readily consuming aquatic insects in the drifting water flow and terrestrial insects that fall into the stream. Larger individuals will include fish in their diets," according to the U.S. Park Service. Asked if the rainbow trout could affect the local aquatic ecosystem, the fish, aquatic invertebrates, and algae, Headly said no. "[The trout] basically cannot survive," he said, due to the rising water temperature.