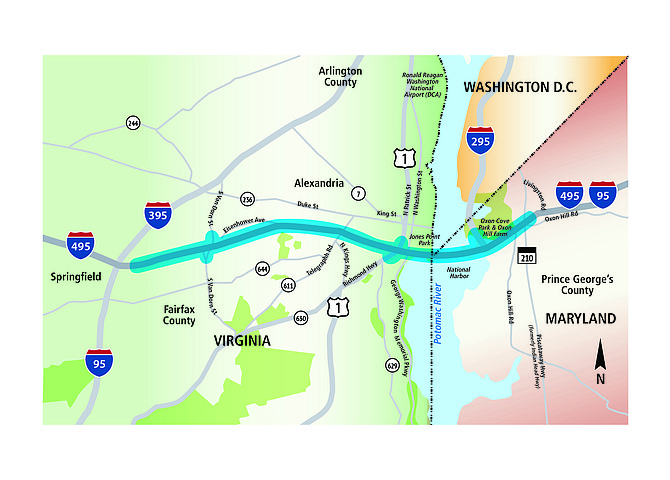 With an EZ-Pass, drivers can bypass traffic on express lanes in certain sections of the beltway, I-66 and I-95 and now officials are looking at one final stretch of interstate I-495 from Springfield across the Woodrow Wilson Bridge into Maryland.

This new idea planners have named “I-495 Southside Express Lanes,” is an 11-mile stretch from the Springfield interchange in Fairfax County, across the Woodrow Wilson Memorial Bridge, to the MD 210 interchange in Prince George’s County, Maryland. As with the other express lanes locations, the trip is toll-free to vehicles with three or more passengers, but an EZ-Pass Flex is needed to get the toll-free option with a switch on it. A regular EZ-Pass will work but it will charge a toll no matter how many passengers are in the vehicle. Motorcycles are free.

When the rebuilt Woodrow Wilson Memorial Bridge opened to traffic in May 2008 it included additional space for future transportation needs which included transit across the bridge. This study is being coordinated with surrounding stakeholders including localities and the Maryland Department of Transportation’s State Highway Administration. The study also will be informed by a Transit and Transportation Demand Management Study to be initiated by the Virginia Department of Rail and Public Transportation and coordinated with the Maryland Transit Administration.

But without three people in the car, the tolls can get very expensive, as many in this area have seen from the express lanes on I-495. In the morning, when traffic is heavy, the cost for riding in the express lanes from a point just south of Braddock Road past the Dulles Toll Road can run $25 or more. The toll lane operators are using a congestion management system to keep the traffic flowing, so the higher tolls are meant to discourage some drivers at that time, and this keeps the traffic on the toll lanes moving. Nevertheless, it can be a costly alternative for someone in a hurry.

The first express lanes were built on I-495 and this was a big project because many of the bridges across I-495 had to be rebuilt, and that included a bike lane bridge north of I-66 as well. The I-95 Express Lanes came next, and these were partially built on a portion of High Occupancy Lanes that had been paid for with taxpayers money, and now the tolls are going to a private operator. At the same time, these lanes were extended down to Garrisonville, and are now being extended to Fredericksburg. Next on the list were the I-66 Express Lanes, and these are still under construction out to Haymarket.

To weigh in on these plans: