Will the Real Mark Riley Please Stand Up?
Votes

Will the Real Mark Riley Please Stand Up? 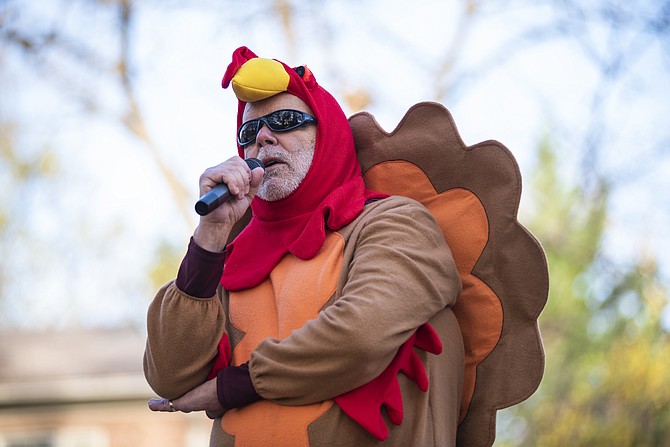 As a result he is one of the three recipients of the Spirit of Community Award being presented in March by Arlington Community Foundation for his years of service.

These days Riley is preparing for his 10th year as Chief Turkey at Arlington’s annual Turkey Trot. Riley said the Turkey Trot began in 2006 with 275 runners. It was started by Christ Church with a small congregation but looking to make a big difference. “We had a new pastor who was looking for ways to reach out. I call it ‘the little church that did.’” 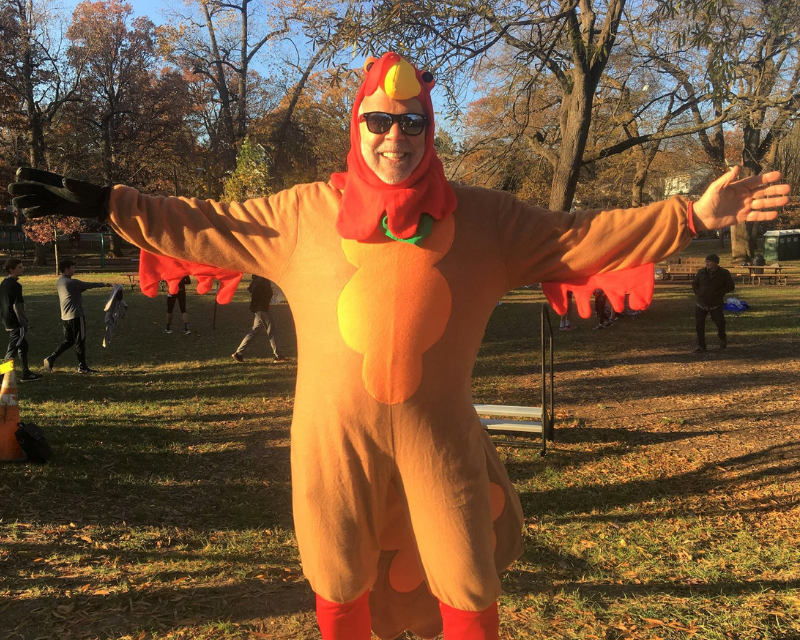 That first year they made $4,200 which was donated to Doorways and Bridges to Independence.  The next year the number of participants doubled to 550 and the third year to 1,100, then 1,800 and on it went. He says participation kept growing and today is capped at 4,000.  Riley says the race is run through the small neighborhoods of Lyon Park and Ashton Heights and they have to be sure they can manage the crowd. Riley says this year they hope to raise $120,000 for the eighteen non-profits who have been selected to share in the proceeds.

During COVID Riley says they had to move to a virtual race where people signed up and ran their own race.  The participation shrank 75 percent from 4,000 to 1,000. “But last year we rebonded as we were coming out of COVID with 3,200 registered. But he says they had a setback with insufficient police officers available to manage the crowd so they had to make a major tricky course correction and run down Pershing over and over.  “This was not good for some of the runners.”

But he is hoping to return this year to the regular 5-K course down Pershing, Highland, Washington Blvd. and ending up at Lyon Park Community Center.  He said they will know the final course November 10. “We have to work with the police to ensure we have the officers to cover the 5-K course.”

Planning for the Thanksgiving Day race begins in February when Riley makes sure everything is cleaned up from the previous year —bills paid, thank you notes sent. Then in March and April the website is set up for the coming year with the T-shirt ready in May. During the summer months they start to engage with the church, reach out to the community, make a really nice flyer and choose the beneficiaries. This year they have 18 non-profit organizations who will share the proceeds of the race. “This is unprecedented from my experience for any organization to have this many beneficiaries.”

During September and October Riley is assembling the 130 volunteers it takes to distribute flyers to neighborhoods before the event, to give out the T-shirts, bibs and packets the weekend before Thanksgiving. Then the day of the event they set up the park, man the start-up at 9th and Fillmore, encourage the racers, clean up the event and, of course, hand out the medals.  “We have 800 medals for kids this year.” Riley says the number of kids from 6-17 years-old has grown to 600-800.  “Some runners who raced 17 years ago now return with their kids.”

The day of the race the runners line up at 8 a.m. The countdown begins 10-9-8…..He says some people run like mad and are finished in 15 minutes; others may take an hour and a half. Some have dogs. “It is a spectacular community festival with people all over the place. There are little people, great big people and all in between. Some wear costumes. The common denominator is the joy on people’s faces. People are pumped.”

Riley says he started wearing his turkey costume in 2018 which was the first year they had an official pre-trot costume party on the Saturday before the event. “My costume has big yellow feet, a body suit from neck to ankles, a headdress, couple of big eyes and big red nose. And of course I wear my black sunglasses. It is fantastic, warm and cozy. I love it.” But he says he strictly saves it for Thanksgiving. He ordered it from Amazon which he points out is one of the sponsors of the trot.

So how did Riley end up as Chief Turkey in a turkey trot?

He says he thinks it all goes back to his mother and her exhortation to knock on doors.  He says he has been proactive since he was five and later having to negotiate payment on his paper route at ten.

Riley attended the University of Arizona where he majored in child and family studies. After school he ended up working at the Children’s Seashore House in Children’s Hospital of Philadelphia where in 1979 he met Tracy. He says she had encephalitis at three-years-old and was developmentally functioning at a two-month level.  “I watched her walk out of the hospital 9 months later. She changed my life.”

He decided to move to D.C. with his wife to find a job to help children like Tracy. “I had no contacts here so I got out the white pages of the phone book and picked ten organizations to start calling. When they didn’t call back, (here comes that knocking again) I went knocking on their doors and asked to see their chief executive for 10 minutes. I was crazier than a loon.” But he says he got to know people that way and ended up at the National Network of Runaway Youth Services.

Along the way he went to law school with a focus on family and juvenile law. After a career focused on helping those most in need, he retired in January 2018 but he says he knows in his heart and soul that he will be doing his community work until he dies. Riley says he is grateful and pleased to be receiving the Spirit of Community Award and he wants to share it with the community he has been so close with for so long, especially the non-profits so dedicated with helping others.

Register at arlingtonvaturkeytrot.org. Online registration closes Sunday, November 20 at 8 p.m. $50 for adults; $25 for kids 6-17, free for children 5 and younger. The racecourse begins at the corner of Garfield and Pershing, one block from Christ Church of Arlington.