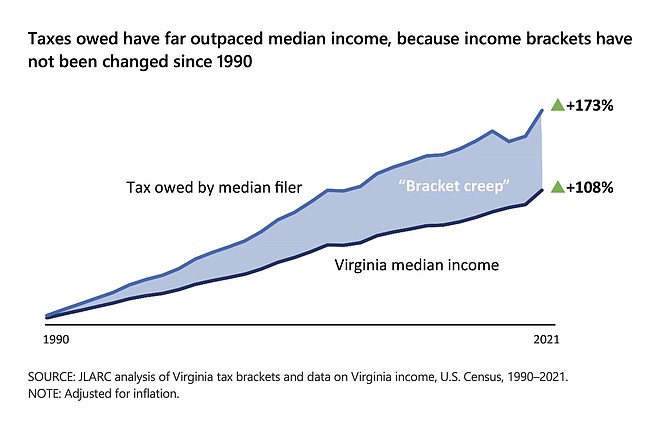 Virginia's antiquated tax brackets have not been updated since "Thunderstruck" by AC/DC was topping the charts in the early 1990s. Now a new set of recommendations from the Joint Legislative Audit and Review Commission is rocking Virginia’s budget talks, outlining a plan to reduce the tax burden on low-income people who are left holding a rising share of the bill as inflation shrinks the buying power of the dollar.

"Experts call this bracket creep," said Justin Brown, senior associate director of the Joint Legislative Audit and Review Commission. "The income brackets in Virginia have been the same in dollar terms since 1990. And for a year or two that's not a big issue. But over the long term it has a pretty big impact. Income goes up over time but the brackets haven't."

"They don't want to give up the money. Inflation is a wonderful thing if you're the government because your revenue continues to grow."

One of the recommendations to make Virginia’s tax code more progressive is reducing taxes on people who earn between $36,000 and $68,000 a year by indexing the tax brackets to account for inflation. Virginia is one of 13 states that does not have some form of indexing their income tax brackets for inflation, and groups like the Thomas Jefferson Institute have been pushing this idea unsuccessfully for years.

"They don't want to give up the money," said Stephen Haner, senior fellow at the Thomas Jefferson Institute for Public Policy. "Inflation is a wonderful thing if you're the government because your revenue continues to grow."

The Thomas Jefferson Institute for Public Policy mission is to advance alternative policy ideas based on the Institute’s belief in free markets, limited government and individual responsibility.

SINCE THE LAST TIME Virginia's income-tax brackets were updated, median income has increased 108 percent. But income taxes owed by a single filer with median income increased 173 percent. As a result, a much higher percentage of each filer's income is taxed at the highest rate of 5.75 percent on income of more than $17,000.

"Incomes rise over time," the JLARC report explains, "but income tax brackets do not."

Virginia first adopted a levy on income in 1843, more than a dozen years before the Civil War. Since that time, it's been updated many times although not lately. The delay in updating the antiquated tax brackets has created an increasing burden on the poor while offering relief to the rich. Now the governor and members of the money committees will be facing an operational challenge of how to take a state as diverse as Virginia and make it work.

“You then get into the complexity of which inflation measure is the right one to use,” said Terry Clower, professor of public policy at George Mason University’s Schar School of Policy and Government. “Not only that, how do you make a single statewide number that really applies fairly across all jurisdictions?”

GOVERNOR GLENN YOUNGKIN will present his budget in mid-December, and he's hearing from advocates on all sides of the debate over tax reform. Earlier this year, he signed a budget that nearly doubled the standard income-tax deduction from $4,500 to $8,000 for single filers and from $9,000 to $16,000 for married couples filing jointly. The budget Youngkin signed last summer also made the state earned income tax credit partially refundable, allowing low-income filers to get a refund even if they have little or no tax liability.

"We've taken the important steps to eliminate the state's portion of the grocery tax, increase the standard deduction by 80 percent and declare the largest tax rebate in the history of Virginia," Youngkin declared at a Richmond grocery store that served as the backdrop to a ceremonial signing last summer. “Look, this will not overcome everything, and oh, by the way, it's not everything I wanted. So we're going to go back in January and get the rest.”

The JLARC recommendations for making the tax code more progressive offer a challenge and an opportunity for the governor. The challenge is giving up the easy money that comes with inaction, which is why generations of lawmakers in Richmond have decided to kick the can down the road rather than taking action. The opportunity is striking a balance among the many interest groups demanding money. For example, advocates for affordable housing are still waiting for lawmakers to take action on last year's JLARC recommendation on affordable housing, which included creating incentives for local governments to change zoning ordinances to encourage affordable housing.

"The General Assembly is likely to talk about increasing tax relief, but more important and more key to people on the ground is housing relief," said Sheila Herlihy, an organizer with the Virginia Interfaith Center for Public Policy. "We don't need another study to tell us that one in three Virginia families are struggling to pay for housing, and we need to allocate resources to support them."