A New Springfield Discussed at Chamber Meeting in Mount Vernon 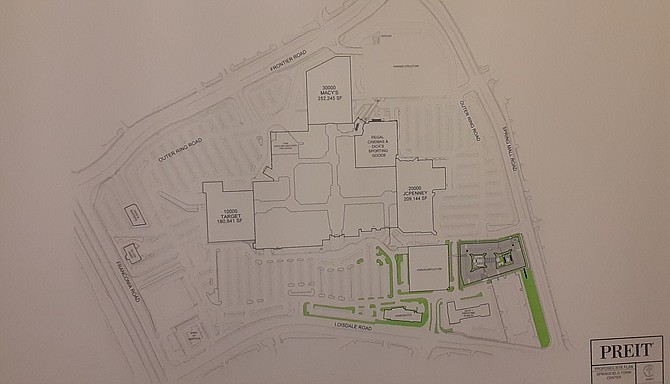 Steven Reilly was armed with economic numbers.
outlet, apartments in the parking lot and a Lego Discovery Center, making it even more of a destination than it already is.

That was the message at the recent Mount Vernon-Lee Chamber of Commerce breakfast meeting at the Belle Haven Country Club.

“I’m committed to working with every developer,” said Supervisor Rodney Lusk (D-Franconia). “Springfield is going to change,” he added.

Eric Christenson, the general manager at the Town Center, was also looking forward to these ideas. “There’s a lot to be excited about,” he said, as he introduced Steven Reilly to the other business leaders in the room. Reilly’s presentation had a lot of Springfield numbers about the hotels in Springfield, the predicted job growth and places for the industrial market.

“Springfield has the highest concentration of hotel rooms in the area, outside of Tyson’s,” he said. “It’s a more affordable option than hotel space in Washington, D.C,” he said.

Although the town center and the surrounding area is a main focal point, it’s not the only change they were looking at. The Transportation Security Administration moved into a new building just south of the town center and there is a new 750,000-square-foot Inova Hospital planned for a lot on the corner of the Franconia-Springfield Parkway and Beulah Street, which is about two miles east of the town center. For the hospital, they are expecting buildings to sprout up here and there to hold supporting medical entities. Over the next 10 years, they’re looking at an additional 245,000 jobs.

As an example of where similar development was used in this manner, Reilly talked about the area around Atlanta. It was a success and “that’s what is possible,” he said. To accompany his four themes, he had 27 action items so a few things need to happen before the plan moves forward. “This is not something that will happen overnight,” Reilly said. A timeframe mentioned was 24-30 months, and the pandemic could affect the time as well.

Transportation was not a focal point, but when it was time for questions, the only question had to do with parking. There are plans to add another level to one of the parking garages, but Christenson said there are always parking spots available.

“The parking garages are never full,” he said.