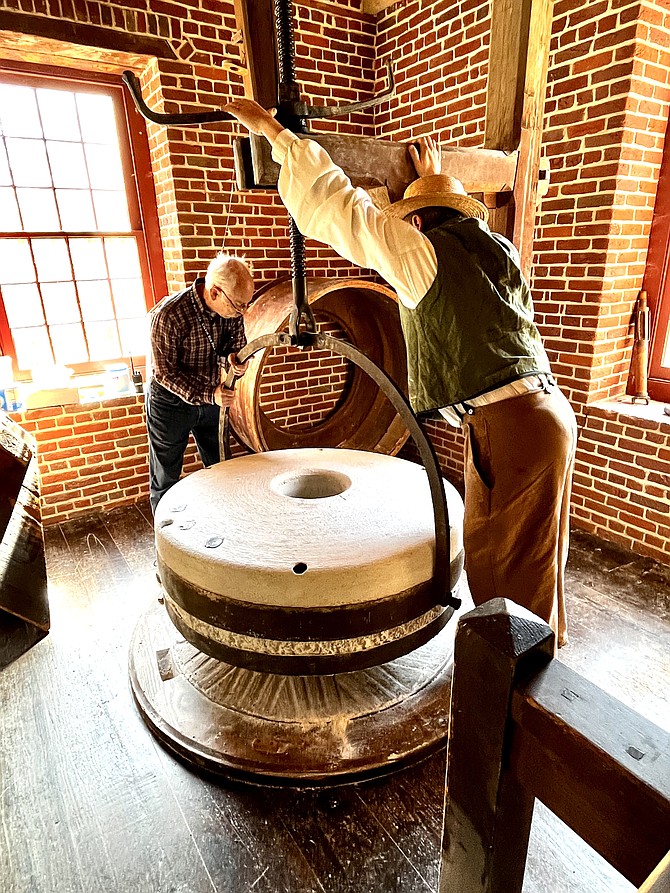 Ticket-holders for Harvest Time at Colvin Run Mill were whisked back to the Industrial Revolution era of the 1800s on Sunday, Oct. 23. The four-story brick grist mill, circa 1810, is situated on a triangle of land formed by Leesburg Pike and Colvin Run Road.

In 1965, the Fairfax County Park Authority acquired the disused grist mill and restored it as a representative working example of Oliver Evans' (1791–1821) pioneering automated technology. Its design required many mechanical motions and original devices that reduced the manual labor needed to operate a grist mill, allowing for a continuous grinding process. The millstones and all other moving components are powered by an overshot waterwheel on the first floor. The restored mill features an impressive grinding station on the first floor, directly above the cog pit, which was visible to visitors.

Steve Golobic, the salaried miller at Colvin Run, and Bob Coblerz, a Springfield volunteer, positioned the millstones. "We are lowering the runner stone onto the drive. The drive turns the runner stone to grind the grain," Golobic said.

Nearby, Kayvon Sari and Buket Ozbek of Alexandria, the mill's new historian and educator, observed and listened. Golobic continued to set the stones with Coblerz and, conscious of where he positioned his feet, said that the stone weighed 2,500 pounds. A misguided drop, "no more toes."

The location of the 200-year-old operating grist mill was initially determined by its proximity to a reliable source of strong falling water, Colvin Run, and the turnpike. George Washington purchased the land in 1763, recognizing the present mill's potential, and established a mill seat there. In late 18th century and early 19th century Virginia, flour milling was one of the essential services to the state's economy. Most farmers relied on water-powered grist mills to convert their grain into flour and meal, which were less expensive to transport to coastal markets than grain.

In addition to the extensive work performed by the Park Authority on the mill building, the millrace from the Colvin Run had to be re-dug, lined with concrete, topped with stone, and run through a 100-foot-long culvert constructed beneath Leesburg Turnpike, Route 7.

Golobic walked to the window overlooking the 1970 oak-constructed, 20-foot overshot water wheel that drives the machinery. He was preparing to open the waterway. The water would fall into the flume and through the sluice gate, striking the waterwheel.

Elizabeth Hanes, 17, of Herndon, Reese Higgins, 14, of Great Falls, and Elizabeth Crawford, 12, of McLean, hurried outside to observe the water pouring into the sixty buckets that extended around the circumference of the wheel. The weight of the buckets would cause the wheel to rotate counterclockwise. The generated power is transmitted through the nine-foot cog pit and gears to the rest of the mill.

Up the path, the Reed and Albino families of Bethesda climbed the flagstone steps to the shade of the miller's residence, once owned by the Millard family. They operated the mill during its most prosperous period, from 1883 to 1934. An estimated one million bushels of grain had passed through the Colvin Run Mill by 1930. Shortly after, the state highway department began building a new road through the mill race, cutting off the mill from its power source.

Visitors learned from volunteer Tom Bova of Arlington how corn could be made into whiskey as well as flour. "The still uses evaporation and condensation to concentrate the alcohol," he said. Visitors also took part in apple cider production, learned how to create corn husk dolls, and visited the General Store.