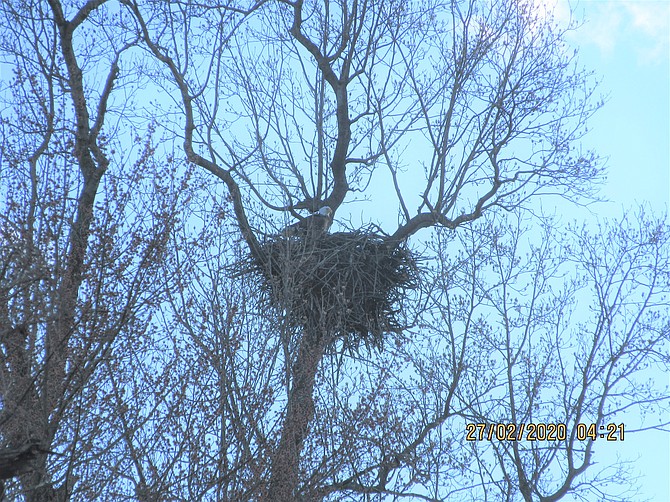 Bald eagle perched on its nest in Dyke Marsh.

“Oh wow!” one woman exclaimed, when she got an up-close view using a spotting scope provided by Dixie Sommers, Vice President of the Friends of Dyke Marsh (FODM). “It’s a common bird here,” Sommers told the group.

Sommers also helped attendees zoom in on red-bellied woodpeckers, one of several woodpecker species in Northern Virginia. These birds have a slight reddish wash on their breasts, hence the name, but a more visible bright red “cap” and a striking black-and-white, barred back. “A red-bellied woodpecker can stick out its tongue nearly two inches past the end of its beak," according to Cornell University’s All about Birds. The group saw many woodpecker holes in dead tree snags. Woodpeckers excavate holes searching for insect larvae, bugs and sap.

Two noisy, fluttering flocks of fish crows made their presence known. Fish crows are omnivores that often live near water. They are slightly smaller than the ubiquitous American crow and avid bird watchers say that they can only definitively distinguish fish crows from American crows by the fish crow’s high nasal call.

It was an unseasonable, 50-degree day and the trail was bustling with visitors. Two men were headed to the boardwalk with fishing gear in hopes of snagging catfish and snakeheads.

“What a glorious, sun-filled day for our 2023 annual First Hike!” Storck commented 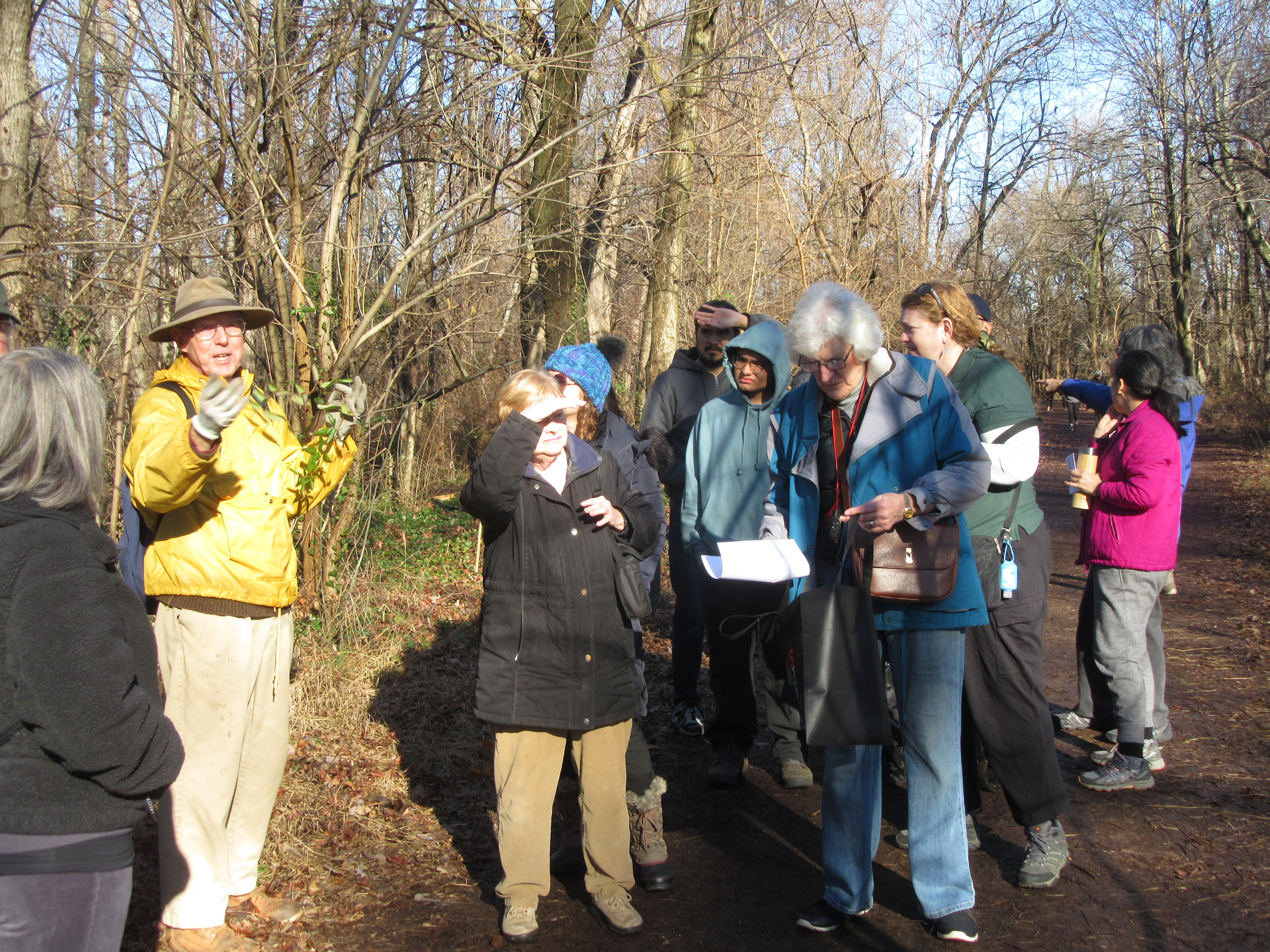 afterward. “A huge thank you to the Friends of Dyke Marsh for hosting us to ring in the new year in nature. The beautiful nature preserve, excellent plant and bird talks, multiple close-up eagle views and many conversations made it one of the best ever. I especially appreciated hearing from many that it was their first visit to the preserve and how much you enjoyed our shared experience.”

Botanist Elizabeth Wells discussed plants, like the narrow-leaf cattails that have hotdog-shaped flowers that get fuzzy in winter. The narrow-leaf cattails in Dyke Marsh differ from the cattail species in the Huntley Meadows Park nontidal wetland, she explained. Huntley Meadows cattails have wider leaves and grow in quieter water. Dyke Marsh has three-foot tides twice a day that narrow-leaf cattails can tolerate. “Cattails are a sign of an environment in transition, for they are a key plant in changing wet areas into dry land,” wrote Donald W. Stokes in “A Guide to Nature in Winter.” After all, a wetland is wet land.

Cattail flowerheads can have up to 125,000 seeds per head, Stokes estimated. “All through winter these flowerheads continue to break apart, looking like the stuffing from leaks in old chairs, while wind and water carry the seeds to new muddy areas of the shoreline. In winter the fluff is used by mice to insulate their homes and in spring it will be used by birds in the lining of their nests.” These flowers have hairs that help the plant disperse seeds with the wind, Wells explained, one of the several ways plants disperse seeds.

Wells also pointed out tiny spicebush and red maple tree buds, noting that maples are “one of the earliest trees to flower” in the spring. Plume-like goldenrod seedheads swayed in the breeze. Next to the boardwalk, she examined the red stems of swamp dogwoods.

Jim Gearing described FODM’s efforts to control invasive plants like English ivy and porcelain berry. One area formerly blanketed by invasive clematis vines that overwhelmed native plants now has native plants like horseweed. He noted that poison ivy is a native plant, with berries that birds love, and in winter, has a brown, hairy vine. He contrasted the vine with the scaly bark of native grape vines looping down from tree limbs.

Bald eagle adults can weigh from 10 to 14 pounds and have an eight-foot wingspan. Pairs mate for life and usually return to their previous year’s nest. Nests can reach five-to-six feet in diameter and be two-to-four feet tall. Females incubate two to three eggs for five to six weeks. Between May and July, the chicks fledge. Bald eagles swoop down and grasp their prey in their talons. They eat mostly fish, but also gulls, small mammals, snakes and waterfowl.

Bald eagles are a conservation success story. Once in danger of extinction, they have rebounded from only 417 known nesting pairs in 1963 to around 71,467 nesting pairs in 2021 in the contiguous U.S. DDT and other pesticide compounds that moved up the food chain caused eggshell thinning so severe that the shells broke and chicks failed to hatch. In 1967, the U.S. Fish and Wildlife Service (FWS) listed the bald eagle as endangered and in 1972 Congress banned DDT. Eagle numbers rose and in 2007, FWS announced the bird’s recovery and removed it from the endangered species list, but other laws still protect eagles.

Lorton-area resident Chris Ambrose went to Dyke Marsh for the first time on Jan. 1. “I came to experience the site, but also to see all the great work that the Friends of Dyke Marsh are doing to preserve it,” he said. “It is truly impressive work. I hope more people will take the time to help preserve and restore this gem of a habitat.”