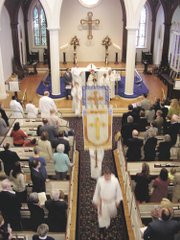 A procession of banners leaves the church at the end of St. Paul’s rededication ceremony on Sunday.

The gothic style of St. Paul’s interior architecture was based on St. James Church in Piccadilly, London.

The year was 1809, and the November leaves were forming their annual panoply when congregates at Christ Church found themselves at bitter loggerheads. Two warring factions could not agree on proper clerical garb and the style of sermon delivery — ostensibly superficial matters, yet ones that cut to the heart of how the Episcopal liturgy was interpreted and understood. Since his 1807 arrival in Alexandria, the Rev. William Gibson had jettisoned the previous rector’s black silk cassock in favor of a white surplice. In the pulpit, he adopted a high-church style that many longtime members at Christ Church found distasteful.

Resentments grew over the next two years, and a whisper campaign was mounted against Gibson.

By late 1809, Gibson decided to resign — abruptly announcing his decision during a late October service. A few days later, he published an advertisement in this newspaper announcing that he would begin preaching at the Independent Meeting House on Fairfax Street, a building that once stood between Price and Duke streets. Several former members of Christ Church met at that location, elected a vestry and St. Paul’s Episcopal Church was born — exactly 198 years ago this week.

Since that time, the church hired famed architect Benjamin Henry Latrobe to build a new sanctuary on Pitt Street and grew into an Old Town institution. Over the years church members built additions, demolished them and built larger buildings to replace the previous ones as membership grew and programs blossomed. Last Sunday — in celebration of a $6.5-million renovation of two of those buildings — St. Paul’s members gathered for a special service to rededicate Wilmer Hall and Norton Hall.

"It astounds me that some of the families who were part of that original membership are still vital parts of our church," said Rector Oran Warder during the rededication ceremony on Sunday. "Today we rededicate this space and ourselves to our shared mission."

&lt;b&gt;THE CHURCH ON&lt;/b&gt; South Pitt Street is like a small campus in the middle of Old Town, with Latrobe’s building acting as a centerpiece. To the north, Norton Hall acts as a large meeting space. It was named for the Rev. George Hatley Norton, the longest serving rector in the church’s history whose leadership lasted from 1859 to 1893. He led the church through some of its most difficult years during and after the Civil War, keeping an hourglass with him in the pulpit to make sure that his sermons were delivered within the correct timeframe.

To the south, Wilmer Hall houses the church’s school and offices. It was named for the Rev. William Holland Wilmer, one of the church’s early leaders who took over after Gibson — a man who remained controversial even after the split with Christ Church — mysteriously stepped down in 1812. Wilmer was instrumental in saving Old Town from being burned by the British during the War of 1812, and he later engaged in a series of infamous letters arguing with Latrobe over the architectural details about how the sanctuary should be built. Wilmer left Alexandria in 1826 to become president of the College of William and Mary.

Church leaders said that the renovation is not solely about modernizing facilities that have suffered many decades of deferred maintenance. The goal, they said Sunday, was to revitalizing the buildings so that they might better support the growing mission and ministry of the congregation — expanding opportunities as the church heads toward its 200th anniversary in 2009. Yet even as the new buildings will allow for expanded activities, church leaders wanted to underscore the old verities that would be familiar to the generations who have passed through these walls over the years.

"We are surrounded by a great and glorious cloud of witnesses," said the Rev. Mary Kay Brown, who delivered the anniversary sermon. "And a renovated place where we can continue to ask questions."