Clash of The Crews
Votes

Clash of The Crews 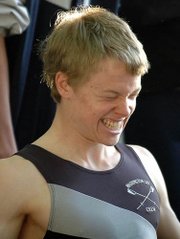 Washington-Lee's program is the longest running crew team in the Metro-D.C. area. 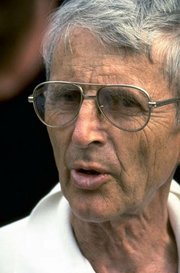 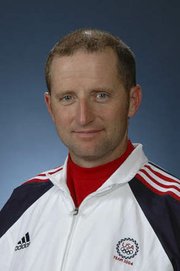 Charley Butt III has been Harvard's lightweight rowing coach since 1986, and consistently has the Crimson among the nation’s elite.

It’s slightly before 9 a.m. on the Potomac River. The dew is still wet and the sun is still rising, yet to fully wake behind the heavy clouds. Roosevelt Island, hunkered down by a heavy tree line and early-morning runners, is to the rowers’ left, and Georgetown, with all its glitz and gothic buildings scan the right bank.

On the river, the crew teams of Yorktown and Washington-Lee, both bitter rivals, have been on the water for a half-hour, ready for a full day of rowing and racing.

And another chapter in Arlington’s rich rowing history.

It’s the Charlie Butt Regatta, a prestigious annual race that bears an even more prestigious name, where local powers bring their boats to vie for river bragging rights.

Nothing is really at stake — the teams are prepping for the upcoming Virginia championships on May 10 on the nearby Occoquan River. This regatta, with 14 teams, held this past Saturday, was more for paddling pride.

“It was a very big thing for them,” said Yorktown boys coach Andy Bacas, who went on to row at Yale after graduating from Washington-Lee in 1976. “They pulled their way through it and they won anyway. I was proud of them…I’d call it a gutsy performance.”

Washington-Lee, the longest running crew team in this nationally renowned hotbed, would have made the boys varsity eight final, but Oakton turned in the second fastest time of any heat and thus eliminated the Generals despite Washington-Lee turning in the exact first-run time as eventual winner Yorktown.

The same Yorktown crew teams that had been dominated by its Arlington sister school for decades is now consistently beating the Generals.

Bacas eluded it the recent success to the recruitment of rowers (nearly 80 are on the team), and that three Patriot seniors are set to row at the University of Virginia, Yale and Colby College next season.

Last season at the Virginia state championship regatta, the Patriots finished in second of an 18-boat field, which marked the first time Yorktown varsity men's eight boat has finished as high as second since the Patriot crew program started. They even beat Washington-Lee.

Beating its rival isn’t a gracious act for a school that is indebted to legendary coach, the late Charles Butt, Jr. himself.

&lt;b&gt;IT WAS POST-WORLD WAR II&lt;/b&gt;, 1949 to be exact, when the blonde-haired coach begged then-Washington-Lee principal Claude Richmond for the opportunity to start a crew team. Only now-defunct George Washington High School had a team — which Butt, Jr. had also helped to start — so Richmond soon was on board. Richmond later coached, describing his school in National Association Amateur Oarsmen Official 1950 Rowing Guide as, “They're sponsored by the Potomac Boat Club, [with] used equipment and coached by yours truly.”

The Generals, with little local competition and access to water, flourished immediately. A mere three months after first putting the boat in the water on March 7, 1949, the Generals won the intermediate eight title at the Presidents Cup. A year later, Washington-Lee’s program ballooned to 100-plus rowers and won at Northern Virginia Championships, Stotesbury and Nationals — the Triple Crown of rowing.

The upstart team would win all three events again the following year, and then enjoyed a three-year reign, sweeping the Triple Crown from 1957-1959.

Butt, Jr. became a crew catalyst, establishing the Generals crew team as a bona fide national powerhouse. He eventually churned out 35 national championship crews, including 13 in the boys’ varsity eight, and coached three Olympians. Charlie took eight of his crews to the Henley Royal Regatta at Henley-on-the-Thames, England, winning the Princess Elizabeth Cup in 1964 and 1969 respectively.

Eventually staying atop the Washington-Lee program for 42 straight years, the legendary coach was dialed in every major rowing program, even earning the “rowing mafia” moniker, which was a slogan of endearment from former students like longtime Georgetown coach Tony Johnson who rowed for Butt, Jr. back in the early 1960s. Butt, Jr.’s only son, Charley Butt III, has been Harvard's lightweight rowing coach since 1986, and consistently has the Crimson among the nation’s elite. Four of Yorktown’s coaches rowed for Washington-Lee, while both coaches at McLean are also General alums.

“He was a great teacher in the virtues of rowing,” Bacas said. “He was Washington-Lee’s program. We loved what he taught us.”

&lt;b&gt;IT TOOK ALMOST 20&lt;/b&gt; years before another Arlington team would be created, this time at Yorktown. Six years after the school was founded, Gary Adkins — a student at Yorktown — helped to drum up support for a new kayaking club. The senior, with some assistance from brother Tom Adkins, the then-unofficial Washington-Lee girls coach, eventually recruited Scott Merritt, the then-president of the Potomac Boat Club.

In 1968, the Patriots put out its first team of 17 rowers under coach Bill Stewart. They first raced with a hand-me-down shell and oars from Washington-Lee.

The Patriots boys teams didn’t win a race until after 1975, when girls crew was formally founded as a sport. In 1983, the Patriots girls junior four captured the gold at the Stotesbury and SRA Nationals, while the boys junior four won the Northern Virginia Championships.

But big wins have come few and far between, as the Patriots have consistently lagged behind the Generals and more recently Thomas Jefferson, who hasn’t lost to a Virginia team in the past 13 years.

“We’ve got a reasonably sized squad and we’re trying to do the right thing,” Bacas said.