Revival on the Potomac
Votes

Revival on the Potomac

With 18 schools in attendance, there were dozens of tents lining the Potomac River with plenty of food and fun for rowers, their friends, and family in attendance.

Spectators line the Potomac River bank armed with binoculars to get a glimpse of the passing crew teams that took part in the Charlie Butt Invitational this past Saturday. 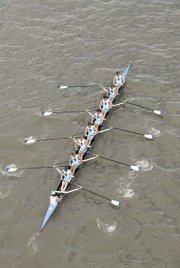 Crossing over the Key Bridge from Rosslyn into Washington, D.C. Saturday morning, there were the familiar sights of Georgetown University and the row houses that line the historic main drag along M Street.

But if anyone took a glance down towards the Potomac River bank, they might have thought an impromptu village had started. Dozens of tents lined a quarter-mile stretch of the district shore as thousands of rowers and their families and friends took in the Charlie Butt Invitational, the lone remaining crew regatta to be held on the Potomac River every year.

“It has the feeling more of a festival than an athletic event,” said Yorktown coach and event organizer Andy Bacas, who had a bike handy to go back-and-forth along the spectator-filled half-mile corridor that equated to bleachers.

Bacas, a Washington-Lee graduate who rowed for the Generals 35 years ago under coach Charlie Butt, remembers when every crew race in the area took place on the Potomac, either in Georgetown or down by Alexandria. Butt established the W-L crew program as the first in the area 60 years ago in 1949.

In recent years, though, the Virginia Scholastic Rowing Association (VASRA) has de-emphasized regattas on the Potomac in favor of the Occoquan River, which is larger, and therefore can accommodate more teams. For example, a race on the Occoquan can have six lanes of boats, whereas the Potomac has the capacity for just four lanes. The only problem is most boathouses on the Occoquan are at least 30 miles outside the area.

And while many of the coaches and athletes on hand Saturday agreed that regattas held in the city are logistically more difficult, preserving the tradition and ambiance of crew along the banks of the Potomac is more important.

It’s not every venue that has the Kennedy Center as a backdrop and is easily accessible for a vice president like Joe Biden, who was on hand to watch his granddaughter race for Sidwell Friends, one of 18 schools along with Arlington’s Yorktown, Washington-Lee, and Bishop O’Connell to compete in the regatta.

“I think it’s really important that we hold these high school regattas where the city of Washington and the surrounding suburbs can actually see it happening,” said Bacas, who is one of several W-L alums that have moved on to the coaching ranks. “The sport needs to keep selling itself as a highly valuable activity with participants and parents, but if we compete in visual obscurity all the time, the city never gets to see what the kids do.”

&lt;b&gt;YORKTOWN SENIOR&lt;/b&gt; Ian Suvak’s story illustrates just how popular the sport of rowing has become in this area of late. Born in Osijek, Croatia during the Croatian War of Independence from Yugoslavia, Suvak was one of several people from his hometown to join a rowing team there.

“It was learning to row, not competitive,” according to Suvak, “since everybody who did rowing in my town was on my team.”

But after moving to Arlington in 2005, Suvak joined the Yorktown crew team and has since become one of the top rowers in the area, helping lead the Patriots’ first varsity eight boat to a first-place finish Saturday. Next year, he’ll move onto the Yale crew team, one of the most prestigious programs in the country.

“When I describe myself, rowing is a big part of me,” said Suvak “It’s helped me in school and I wouldn’t be going to the school I’m going to if it weren’t for rowing.”

It’s athletes like Suvak that have had Bacas and other area coaches advocating for a new boathouse along the Potomac for years. Currently all three Arlington high school rowing teams house their boats in the Thompson Boat Center, sharing the space with Georgetown, George Washington, nine other high schools and several rowing associations.

To say it’s cramped would be an understatement and that was part of the reason Saturday’s festivities took all day. T.C. Williams rowing coach and Yorktown teacher Jon Schildknecht graduated from high school in this area in 1992. Back then, he said there were about 12 schools with crew teams.

Now that number is more than double with “30-plus” around the area to go along with a burgeoning rowing scene in the Richmond and Chesapeake areas. And yet, the number of boathouses along the Potomac has remained the same for the past three decades.

“We don’t have the infrastructure anywhere,” said Schildknecht. “Even the Occoquan can barely handle the number of people that use it.”

“The rowing community around here is in desperate need of a new boathouse,” said Bacas, who added that several proposed sites and private funding from Georgetown University have been shot down by the National Park Service, which controls much of the land along the Potomac River. “This is a growing sport and to allow more kids to participate in a complete way, we need to solve the overcrowding.”

&lt;b&gt;OVERCROWDING&lt;/b&gt; the shoreline was not a problem on Saturday, though. In addition to the many friends and family members getting to see a regatta for the first time — because regattas on the Occoquan are harder to get to and take place mostly in seclusion until a final stretch that has grandstands — there were also those who were simply out enjoying the great weather and stumbled upon a race.

Inside and around the shoreline tents were plenty of food for post race consumption and tons of school spirit. Everyone was in a festive mood as the Potomac River’s big day took flight.

“It’s a beautiful venue and it’s a really great way to spend an afternoon,” said Yorktown senior coxswain Elliot Oakley, who was also a member of that winning men’s varsity eight boat. “Coming down the Potomac in first place, there’s nothing like it.”