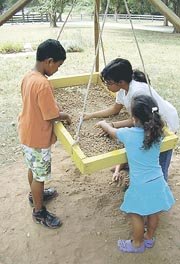 A test site next to Lanesville Ordinary inside the park. 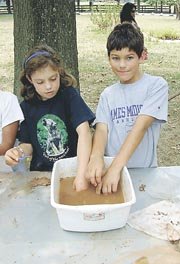 Rachel and Thomas Lowery of Ashburn wash artifacts with a toothbrush.

The Loudoun Archeology Foundation (LAF) held the last of its summer Archeology Days at Claude Moore Park last Thursday. Tom Hyland, member of the board of directors of the LAF said that more than 140 children and 30 adults turned out for the event in just the first two and a half hours.

Hyland and fellow LAF member Nick Chandler had a nice set up with various things for the children to see and do. They put a sifting station up where children could bring piles of dirt in the hopes of finding an artifact, laid out artifacts found from previous digs for the children to wash and examine and gave history lessons on the area and on archeology itself.

"It was a lot of fun," said Thomas Lowery of Ashburn. "It's really cool because I've been doing it for a couple years. My dad and I found a bunch of cool stuff like old quarters from 40 years ago at my grandma's house and I found a lot of glass and even a nail today."

Hyland displayed a bag of the day's findings, which included a sandwich bag full of special stones, a dime dated 1911 and even a large wooden piece with ducks carved into it, which Hyland and Chandler felt was a decorative piece from a household item like a table or desk.

The LAF, though it is only 2 years old, has held 35 events since its inception, with 16 excavations last year at the park, and 15 this year. Hyland said that the digs provide a great chance for children to get a good look at archeology and artifacts and the children surely seemed to be enjoying learning about the trade.

"I think it's pretty nice for digging," Aaron Scott, one of the most avid excavators of the day, said. "It's a pretty good idea."