Getting to Know Yorktown Sports
Votes

Getting to Know Yorktown Sports

Yorktown’s 2008 baseball team became the first National District team to finish the regular season and tournament undefeated. The Patriots went on a 17-game winning streak before bowing out in the f 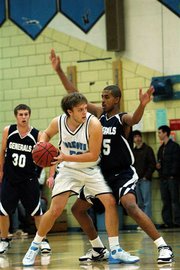 Yorktown has overtaken Washington-Lee and Wakefield as the premier team in the National District, having won back-to-back tournament titles.

The Patriots went 5-6 and 5-2 in the National District. Yorktown continued its winning streak — that dates back to 1982 — over rival Washington-Lee with a 13-7 victory. Yorktown lost to Edison in the first round of the region playoffs for the second consecutive year.

&lt;b&gt;Historic Achievements&lt;/b&gt;: The Patriot football team has won two regional championships in football — one in 1988, when it beat Marshall 26-20, and another in 1999. But Yorktown’s 2008 baseball team became the first National District team to finish the regular season and tournament undefeated. The Patriots went on a 17-game winning streak before bowing out in the first round of the region tournament. During the 2007-2008 school year, the girls basketball and softball teams both set new school standards for wins.

&lt;b&gt;Famous Athletic Graduates&lt;/b&gt;: While the Patriots tout current CBS anchor Katie Couric and Google CEO Eric Schmidt amongst its alumni, there’s no question who is the most outstanding athletic graduate. Tom Dolan (Class of 1993), a 6-foot-6 swimmer who was disagnosed with exercise-induced asthma won a gold and silver medal at the 2000 Summer Olympics and a goal medal at the 1996 Summer Olympics. Dolan still has three Yorktown school records and shares two more. He was inducted into the International Swimming Hall of Fame (ISHOF) in 2006.

&lt;b&gt;Fun Fact&lt;/b&gt;: Yorktown was the premier team in boys gymnastics when the Virginia High School League introduced the sport in 1963. In the first 10 years of competition, the Patriots won eight state titles and finished as the runner-up in the other years. The event was not held in 1969. During that period, Stewart Weisner (Class of 1967) won a school-record seven individual events, while Jeff Jimeson (Class of 1972) won five. The VHSL no longer sponsors boys gymnastics.