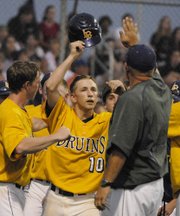 Senior Brenden Daley hit a solo shot for the Bruins in the fifth inning.

This season, the Lake Braddock baseball team didn’t make a habit of losing. The Bruins’ historic 2008 season saw them win 20 consecutive games, a Patriot District title and their second Northern Region crown in three years. All of Lake Braddock’s success this year made their 7-6 loss to Colonial Forge in the AAA Virginia state semifinals all the harder to swallow.

“It was swept right out from beneath us,” said senior Shane Halley in the Bruins’ dugout after the game. “This is like salt in a wound. This is bad.”

Facing a 4-run deficit after two innings, the Bruins calmly took the lead in the top of the fourth with a 5-run inning that included a two-out, three-RBI double by senior catcher Steven Lindemuth. The Bruins collected three hits and walked twice in the inning to chase Colonial Forge starting pitcher Garrett Marin. Senior Brenden Daley hit a solo home run that hugged the left field foul pole to put the Bruins up 6-4 in the top of the fifth inning.

After Haley pitched 1 1/3rd scoreless innings, Lake Braddock head coach Jody Rutherford brought in junior Brian Derner, the Bruins’ most consistent pitcher this year, to close out the game. Despite a large bandage over his left eye, covering an injury suffered in pregame warm-ups, Derner pitched a scoreless bottom of the fourth and retired the Eagles in order in the fifth inning.

In the sixth inning, however, everything fell apart.

With one out, Colonial Forge senior Nick Lanciault stroked a double and seniors Jason Kittell and Levi Hyamns drew walks off of Derner.

“Those walks were just some good at bats,” said Rutherford, who said that he never entertained the idea of taking his junior ace out of the game. “He was our best. We were going to go down with our best. If I am going to lose, I am going to lose with my best pitcher.”

The Eagles cut the Bruins’ lead to one when senior Shayne Paskanik scored Lanciault on a groundout. The Eagles’ next batter, junior Taylor Guinn, hit a slow roller up the middle to give Colonial Forge the 7-6 lead.

It was the Bruins’ first loss since April 1.

“We are just proud for our guys. We played hard all year long. There is not much that you can say to make them feel better,” said Rutherford after the game. “They played with heart. They showed a lot of class and represented the program well. There was nothing that I could say that would make that better.”