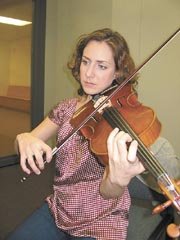 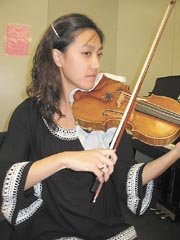 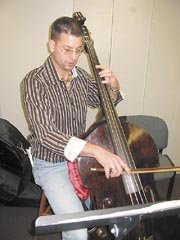 In addition to offering chamber music concerts for adults, they take programs for youngsters into schools and parks: "Musical Camera Safari" has children guess the identity of animals based on musical portraits, like Saint-Saën's classic "Carnival of the Animals" and by Beethoven.

"We give them a clue," said Nancy Jin, after making a meow sound with the violin. "Is this animal a swimming animal or a jumping animal?"

Tiffany Richardson, who plays viola, says she loves the educational aspect of their mission. "With the children, there's an emphasis on them interacting with us and responding."

Their program, "Who's on First Bass?" is interactive and based on music and sports for kids in grades 4-8. It features "Concerto for Basketball" and "Rhythm Around the World," which offers music from Kenya, Ireland and Argentina.

"We try to break down classical music into easily understandable elements that would appeal to young people," said bass player Mark Bergman. To do so with children, he directs their listening to one or two points so they have something on which to focus their attention.

"With adults, we're able to play longer pieces of music," he said.

Jin says she tries to teach the background of the music, and hopes they can take away some history and facts about what they listen to.

"Music can make you feel like you're leaping; it can inspire physical sensations," said Bergman. "So tapping into the way those gestures are related to the physicality of experiencing dance is an important part of why we presented the program."

The group formed when Mark and Nancy were giving educational programs and Richardson had moved back to the area. After playing a few concerts together, one at the Kennedy Center last December, "We just felt really good about the sound of the group," says Bergman. "I noticed each of the instruments blended in a harmonious way."

Originally from Southern Oregon, and now living in Singleton's Grove in Centreville, Bergman, 38, studied music for 28 years, honing his skills at Yale University, the Eastman School of Music and Manhattan School of Music. A double bass player, he is a professor at GMU and is inspired by Edgar Meyer and John Paul Jones from Led Zeppelin. He says Bruce Springsteen's new "Magic" album is terrific.

From Kings Park, trio member Nancy Jin, 30, studied music for 25 years, honing her violin skills at the Cleveland Institute of Music and Yale University. Her musical inspiration comes from violinist Maxim Vengerov, and she admires the sounds of Kelly Clarkson and Christina Aguilera. She gives private violin lessons and lives in Stone Ridge in Loudoun.

Tiffany Richardson, 28, grew up in Fairfax Station now lives in Alexandria. She attended the University of Maryland (College Park) and the New England Conservatory of Music. She studied music for 18 years and is inspired by Dawn Upshaw, an opera singer, Tabea Zimmerman and Beyoncé. She teaches private violin and viola lessons and credits music with allowing her to travel to Russia, England and all over the U.S. "It's just opened up so many opportunities for me and it has created an enormous amount of discipline in my life."

BERGMAN SAYS &lt;/b&gt;the group uses popular music as source material, creating a "stained glass mosaic" for some of the music they perform. For example, they'll take fragments of "Miami Vice" theme song and mix in "When Doves Cry" by Prince.

"Classical music is dramatic," said Bergman. "It has a groove. It rocks. … And I hope that the energy we're able to communicate, convinces people that classical music is every bit exciting as the loudest rock band, even though it takes place on a smaller scale."

Jin says that when playing rock and pop music on stringed instruments, she hopes to bring a more casual element to the musical experience. "We hope that when people come to our concerts, they don't feel like they need to get dressed up," she said.

"We're trying to make classical music more accessible to anyone in the community," said Richardson. "Not just those people who take lessons or choose to go to the symphony. I hope they can walk away with an emotional connection to something they've heard."

"There's a reason why the music of Mozart resonates with people 300 years later," said Bergman. "And that's because the sounds that he created resonate with what binds the human community together.