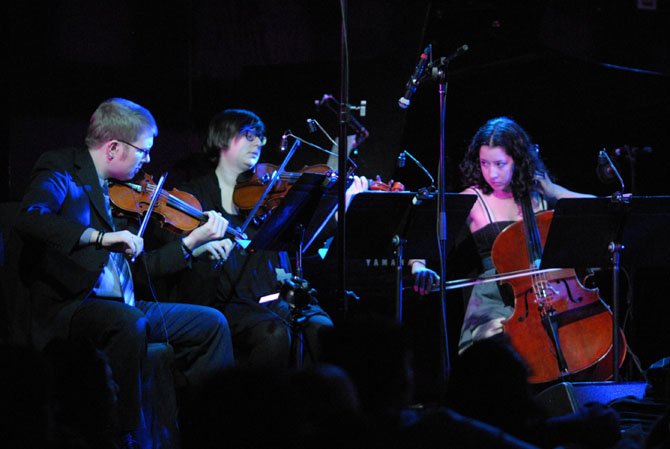 The advance guard in contemporary string and percussion music is arriving courtesy of Reston's CenterStage Professional Touring Artist Series. It is certain to be an evening that will provide handsome renditions of masterworks ranging from exhilarating to Zen-like, serene to dissonant, from the new and perhaps rarely heard, to classics and Grammy-nominated composers of the 20th and 21st centuries.

"We don't subscribe to one type or style of music, our tastes and passions are exceedingly eclectic, and our programs reflect this," added Jensen.

As for Jensen's own musical background, she grew up with Bach, Brahms, the Beach Boys and the Beatles floating about in her head and has a Masters degree from Julliard.

"ACME is at the cutting edge of our musical advancement. What we want from music is ever-evolving and changing ... new music and the composer/musicians of ACME pull us forward into the future by exposing us to musical landscapes that we have yet to imagine," said Paul Douglas Michnewicz, Reston Community Center, director of Arts and Events.

"ACME was formed in order to perform contemporary music (for strings and non-strings alike) at a high caliber level, making efforts to reach audiences unfamiliar with this repertoire," said Jensen. Later came unexpected collaborations with bands and recording artists with rock sensibilities. "We found ourselves playing for a lot of really dedicated listeners."

Providing an inspired takes on a wide-ranging musical repertoire, ACME will bring a five member ensemble of two violins, viola, cello and percussion to Reston to perform the likes of John Cage and Louis Andriessen, and newer works by younger American composers Timothy Andrew, Mick Barr and Jefferson Friedman and Nico Muhly.

ACME has performed in venues such as Carnegie Hall and the Guggenheim Museum. Want to hear some ACME? There is one very ambitious hour-long National Public Radio (NPR) music clip of the group playing Steve Reich string quartet pieces.

There is no easy pigeonhole description of ACME and its musical styling. Forget sound bite branding. "We've worked very hard on a terrific program of contemporary music that we know you will love, so please come out to hear us!" added Jensen.