TWIG Homes Tour: A Walk Through The Past
Votes

TWIG Homes Tour: A Walk Through The Past 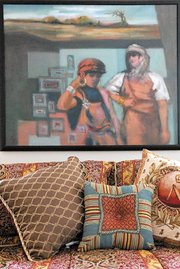 The master bedroom at 100 Prince St. 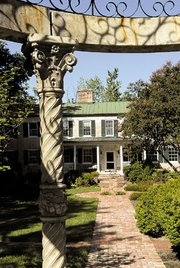 A view from the garden through a new gazebo at the Holland House at 415 Wolfe St. 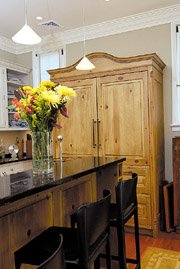 A pine armoire in the newly renovated kitchen at 415 Wolfe St., is a SubZero refrigerator with freezer drawers. 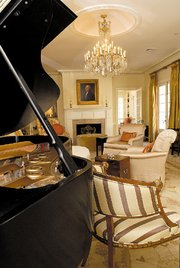 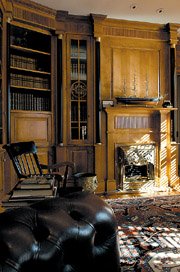 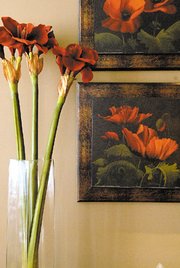 Eclectic art adds color and the 20th century to the Victorian home of 227 S. Pitt St. 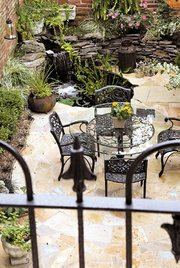 French door open up off the master bedroom to the garden beneath at 227 S. Pitt St. 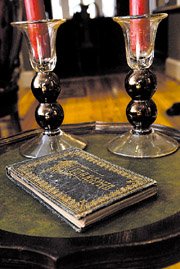 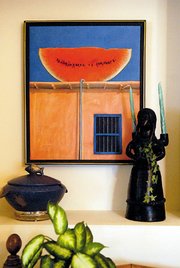 A home in Captain’s row at 100 Prince St., originally a warehouse was restored in 1966. 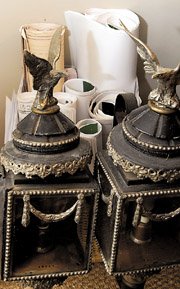 Antique lanterns were salvaged from a Baltimore resident for future use. 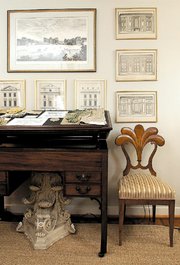 Late 18th century architects desk with a racket adjustable drawing board and Biedermeier chairs in the reception area of Adam’s office.

A Michael Curtis "Hermes" lends a focal pint to the walled garden in the rear of the Washington St. office. 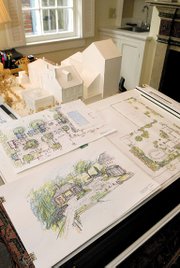 Anyone taking this year's Historic Alexandria Homes Tour, is in for a most unusual visit -- one that will give them the opportunity to witness historic preservation as a concept practiced in a reality. Before Robert Bentley Adams & Associates took possession of 405 S. Washington St., 17 years ago, it once served an occupying Union Army as an annex to the nearby hospital caring for Civil War casualties.

This year's tour is scheduled for Sept. 27 from 10 a.m. to 3 p.m. There will be seven locations open for this 67th annual event sponsored by the Junior Auxiliary of Inova Alexandria Hospital known as The TWIG, an acronym that isn't.

Open for inspection and enjoyment will be some of Alexandria's most beautiful and historic houses filled with antiques and artifacts, as well as two studios and the offices of Adams and Associates, one of Alexandria's leading architectural and interior design firms specializing in historic preservation. Constructed just before the Civil War, this 19th century home turned office complex was a private residence until 1992 when noted Alexandria architect Bud Adams purchased and renovated it to become the home of his firm.

"My offices and the neighboring studios retain the feel of a colonial home. However, in order to convert it from a private home to an office it needed a lot of work since it is 150 plus years old. We had to meet all the office code requirements," Adams said.

"In making the renovations we tried to invoke the type of architectural work we do for our clients," he said. Not only is the building itself a step back into the past, but so also are many of its furnishings, which include an array of early American antiques intermingled with Adams' own interests and educational background.

A graduate of Clemson University with a Bachelor of Arts, specializing in history and fine arts, Adams received his Master of Architecture from North Carolina State University. Prior to establishing his own firm, this life-long Washington area resident worked 10 years for the award winning architectural firm of Arthur Cotton Moore & Associates in Washington, DC.

There he focused on historic preservation projects, federal institutional and residential design that included the Library of Congress, the U.S. Treasury's Main Building, the Old Post Office Building, Foxhall Crescent and the Washington Harbour Condominiums.

His work also included the master plan for the renovation of the Old Executive Office Building as well as modifications to the U.S. State Department and the Pentagon.

This personal bridge between various eras of American history is reflected in his offices, which retain the character of a private home, furnished with family heirlooms, and the practice of architectural historic preservation. Many of the furnishing have been adapted to office functions such as the 18th century architect's desk with its ratchet mechanism, to adjust the drawing surface, and its sturdy handles, enabling it to be transported to building sites.

In juxtaposition to that is the glass desktop in his office that was once used in a government agency lab to study the first moon rocks. That top is supported by two 19th-century sewing machine bases.

His personal office is located in the home's original 1850's kitchen with furnishings that reflect his interest in industrial and mechanical objects. The small computer table is a "beaten biscuit machine" -- a mechanism for the preparation of a southern delicacy.

THE EARLY 20TH CENTURY drafting table is similar to the student desk Adams first used in his mechanical drawing class. It is complemented by 19th century lighting standards framed behind his desk. Kitchen cabinets now serve as storage areas for architectural plans and drawings.

To the right of the home's entrance hall is the parlor which serves as the firm's reception area furnished with a 17th century English architect's desk. Further down the hall is a drafting studio containing a sofa from the Shenandoah Valley with large wooden arms concealing secret compartments.

These hideaways were used by its owners to stash the family silver during the Civil War to prevent it being pillaged by marauding soldiers. The jib door in the corner leads to the basement.

The dining room functions as the bookkeeping and landscape design office, while the upstairs bedrooms serve as additional design studios. Historic architectural prints grace the walls. A framed Alexandria map pin points each of the firm's Old Town projects.

Leaving the house through the French doors, visitors will step into the tranquil, green garden planted with cherry trees, boxwood and dwarf red cutleaf Japanese maples. Here the focal point is the sculpture "Herm" by local artist Michael Curtis. There are also four Kismos chairs of early Greek design noted for their timeless form and comfort.

Explaining why he chose this historic home for his office, Adams matter-of-factly says, "I wanted something close to my home on South Fairfax Street. And, as it turned out we were actually green before we even knew what that was." The Adams' home, which was featured on the May 2005 cover of Traditional Home magazine, will be among those included on the 2009 Spring Garden Tour.

IN ADDITION to this year's home tour, the day includes the Artisan Show from 10 a.m. to 4 p.m. at The Old Presbyterian Meeting House, 323 S. Fairfax St. It affords the opportunity to purchase a wide array of knits, handbags, note cards, paintings, renderings and many other creations of TWIG artisans.

TWIG was founded in 1933 by 24 young women who gathered at the home of Mrs. Julian T. Burke to form the Junior Auxiliary of the Alexandria Hospital. They chose the name "TWIG" from a contest entry by Nellie Sommers Blackwell, which described the new organization as a small "branch" of the "tree" which represented the hospital.

Since its creation, TWIG has contributed over $2.5 million in equipment and grants to the hospital raised through a variety of events such as their Homes Tour. Tickets for this year's event are $30 if purchased in advance and $35 on tour day.

In addition to individual tickets, there are also three tour support categories for those wishing to contribute to TWIGS' mission. They and their price ranges are: Benefactor at $150 includes four tickets; Patron at $100 includes two tickets; and Friend at $75 includes one ticket.

Tickets are available at the TWIGS Thrift Shop, 106 N. Columbus St.; The Lyceum, 201 S. Washington St.; The Ramsey House Visitors Center, 221 King St.; or online at the tour Web site www.thetwig.org/homestourArtisan.html prior to Sept. 27. Tickets will be available at each site on tour day. For additional information call 703-683-5544 or visit &lt;a href=http://www.thetwig.org&gt;www.thetwig.org&lt;/a&gt;.

As usual, children under 12 are not allowed to tour the homes and strollers are not permitted; however, small infants may be carried by a parent or guardian. Photography of any kind is prohibited inside the homes. Guests are asked not to wear high heels or to touch any surfaces or furnishings.