Fresh Taste at the Ballpark
Votes

Fresh Taste at the Ballpark 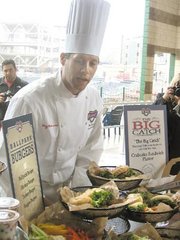 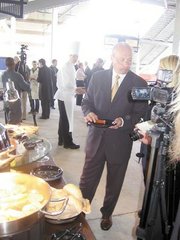 Stan Kasten, Nationals team president, noshes on a half-smoke during the April 3 unveiling of the new concession menu at Nationals Stadium in Washington, D.C.

A signature item available at Nationals Stadium for the first time this year is The Big Catch, a foot-long Crab Louie sandwich that comes with a foot of crab-spiced fries.

The new menu includes a variety of burger options, including a veggie burger and a spicy shrimp po boy.

In its sophomore season at the Nationals Stadium, Washington, D.C.’s Major League Baseball club is hoping the way to a fan’s heart may be through his stomach. That was at least part of the message Stan Kasten, Nationals team president, offered Friday, April 3, during a “What’s New at Nationals Park” media tour.

Between raindrops, Kasten showed off improvements that the team has made to the one-year-old stadium during the off-season, including a set of oversized starting line-up signs fashioned after baseball cards, additional picnic tables throughout the concourse and 7-foot tall bobblehead statues of the racing presidents, waiting to have their photos taken with fans.

But the centerpiece of the tour was the new food unveiled by Executive Chef Phil Bucco of the Levy Restaurants. During the off-season, the Nationals hired Levy as its new concessionaire and asked them to freshen up the stadium’s menu.

From day one, Bucco sought to blow the stadium’s menu out of the water. “We try to work in the local favorites as well as give a lot of new options,” he said. “There are going to be a lot of surprises, from the healthy options that we’re going to put out there now, from the upgraded items that we’ve put on.” As an example, he pointed to the “quasi-dilla,” an inside out sandwich with the quesadilla as the bread.

“It’s filled like a sandwich,” he said. “That kind of innovative approach is what sets us apart.”

Among the other new items available at the park this spring are a variety of hamburger selections, including a spicy shrimp po boy and a veggie burger; a Healthy Plate cart featuring fresh produce; and The Big Catch, a Crab Louise sandwich. Lightly smothered in dressing, lumps of crab meat and thinly sliced red onions fill up The Big Catch’s foot-long soft bun, making it the signature item of the new menu.

“We loved the Crab Louis sandwich,” said Jeff Saffelle of Alexandria, who authors the Nationals blog Nats320 [www.Nats320.blogspot.com]. “The shrimp burger is very spicy. It’s got a nice taste to it.”

Saffelle and his wife Sohna are season-ticket owners and expect to be at every game. Eighty-two home games means 82 opportunities to eat at the ballpark. The new expanded menu was something that they welcomed.

“We like the fact that there as some fresh new offerings,” said Jeff Saffelle. “Coming to every game like we do, it gets a little boring eating the same thing all the time like we did last year. This spices it up and makes it a little different.”

“They also introduced more healthy food,” said Sohna Saffelle. “Since we like to eat healthy, we have a problem with potato chips and that stuff.” She appreciated having healthier choices at the ballpark.

“This year we’re going to have a fresh food stand,” said Kasten, “featuring fresh fruit, fresh vegetables, hummus and things like that.”

The new menu is just one more draw for fans that may be looking for a nice, inexpensive entertainment experience.

“There’s no question that the entertainment business if feeling the problems that our customers are feeling,” said Kasten. “We recognize that. We’ve reached out in the ways that we can.”

The Nationals have lowered ticket prices and offered smaller ticket packages, all in the interest of drawing families to the ballpark.

Kasten pointed to the availability of $5 tickets for every game and the proximity of the stadium to Metro as draws for people looking for an inexpensive evening out. “We’re reaching out in all the ways we can to help our customers still come out and enjoy what has always been the most affordable sports alternative,” he said.