Local athletes remember the highs and lows of choosing a college.

AJ Price emerged to become one of the metro area’s top receivers during his senior season at South Lakes, drawing the attention of several big-time college football programs. 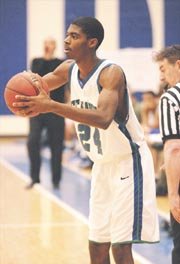 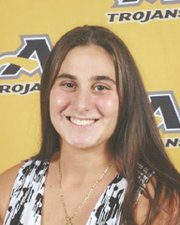 2007 Oakton High graduate Ashley Abed was part of an Anderson University women’s basketball team that qualified for the NCAA Div. 2 tournament this past season. 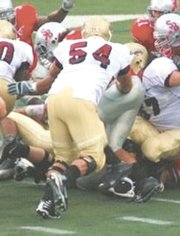 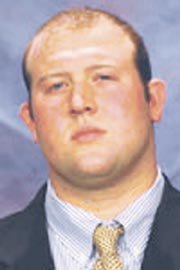 Here is a look three college athletes from Northern Virginia – AJ Price (South Lakes), Ashley Abed (Oakton) and Jeff Allen (Langley). Each is pleased with where they ended up, but getting there was completely different for each, and anything but simple.

A.J. Price, a 6-foot-4 inch football wide receiver at Penn State University, did not emerge into a major recruiting prospect until his senior year in high school at South Lakes.

That fall season, South Lakes coach John Ellenberger elected to emphasize the Seahawks’ passing attack on offense. As a result, Price had a breakout season, catching 32 passes for 816 yards and 11 touchdowns. He averaged 25.5 yards per catch and earned Second Team All-State accolades, among other honors.

During Price’s high school junior season a year earlier, South Lakes had utilized the wishbone offense which stresses running the football. Price played well that season but did not catch many balls because the Seahawks simply did not pass often.

But Price stood out following his prolific senior campaign. Major collegiate football programs, such as Duke, the University of Michigan, the University of Virginia and Penn State, contacted Ellenberger in order to make their intentions known about recruiting Price. Each of those programs ultimately offered him a football scholarship.

“Every time someone new would come into the picture, Ellenberger would tell me everything,” said the low-key Price, of the major college suitors expressing interest. “I’m not really one for all the glamour and all, and I wasn’t used to being the person being talked about. I tried to take [the attention] in stride.”

Price, who graduated in 2008, will never forget the December day during his senior year that Penn State, a renowned powerhouse program under legendary coach Joe Paterno, offered him a scholarship.

The moment came during the school day. Ellenberger, teaching an English class, got a call from Penn State and was told by a member of the Nittany Lions’ football staff that they would make an offer to Price. The teacher-coach immediately found Price to give him the big news.

“Coach Ellenberger said they made an offer and I had a big grin on my face,” said Price. “He ran down the hall and [found me]. I thought, `Wow, not too many people experience this.’”

Price committed about a month later during a weekend visit to Penn State with his mother. First, he informed his mother of his decision, which happened to be the day of A.J.’s birthday (Jan. 19).

“I told my mom on my birthday, than I told coach Paterno and the other coaches the next day at brunch.”

The funny thing is that Paterno, during that brunch, was still in a recruiting mode with Price prior to learning of the recruit’s decision.

“He had gone through this spiel on why Penn State was a great program,” said Price. “He went through this 10 minute speech.”

When Price informed the coach he was going to accept the scholarship, Paterno was pleased and in good spirits.

“He jokingly said I could have saved him the breath,” recalled Price, with a chuckle. “He was very happy.”

Price completed a redshirt freshmen season this past fall, meaning he still has four years of football eligibility. As a redshirt, Price was allowed to practice with the team and dress for home games but he could not play. The first time he put on a Penn State uniform was for the Nittany Lions’ season opener against Coastal Carolina.

“My jersey was huge,” said Price, of his No. 14 uniform top. “There was a sense of, `I made it.’ My [younger] brothers [Brandon and Sean] and mom were in the stands watching.”

Price said his recruiting experience in dealing with Penn State was outstanding. His contact person through the process was Penn State assistant coach Larry Johnson, a former head coach at T.C. Williams High in Alexandria.

“I love it [at Penn State],” said Price, a history major. “They’ve been the same since they recruited me until now. Coach Johnson was really great and someone I kept in touch with [during the recruiting process]. He was always in touch with me.”

For Ashley Abed, a 2007 Oakton High graduate, the path to becoming a women’s college basketball player at NCAA Div. 2 Anderson University (S.C.) was an eventful journey.

The 5-10 forward said she always desired to play college basketball. During her junior season at Oakton, Abed believed she would fit in nicely with a Div. 2 college program.

Not being a big time recruiting prospect, Abed had to initiate contact with some of the schools she was interested in, although there were other schools that expressed interest in her.

Her high school coach, Fred Priester, made a highlight tape of Abed to give to schools.

She eventually elected to accept an offer to play at Francis Marion University (Florence, S.C.).

“I had gone down for a visit, liked the coach and had a lot of fun with the players,” recalled Abed.

But during the summer prior to her freshmen year at Marion, Abed learned that a coaching change had occurred and the coach who had recruited her was no longer with the team.

“I was kind of overwhelmed and didn’t know what to expect,” she said, of the change in coaches. “I had to go down and meet [the new coach]. She was a great coach.”

Abed did, in fact, like the new coach. But as things turned out, she received less playing time than she had hoped.

“It was kind of my role to be a verbal player on the bench and to be a practice player,” said Abed.

Following the season, she decided she would transfer and began another search for schools even as her freshmen year at Francis Marion was winding down.

“It was real complicated and hard for me,” said Abed, who said her parents and Priester were instrumental in helping her during the process. “Coach Priester was amazing and my parents too. They did a great job of finding schools.”

Anderson University was not a school Abed had initially looked at during her school search a year earlier. But then-Anderson women’s coach Jeff Dow, upon learning about Abed, was interested in recruiting her. She visited the campus and met the coach.

“I knew he was a coach I wanted to play for,” she said.

But again, the school Abed was ready to attend made a coaching change. Dow, Abed learned the summer prior to her sophomore year, was leaving. The new coach would be Jim Brunelli.

“I was like, `Gosh, this is happening again,’” said Abed.

But Abed, while on a summer vacation, received a phone call from Brunelli, who reassured her of her place with the program.

Abed, it turned out, had a terrific season. The Anderson team was not expected to do well as a result of the late coaching change, but won the Conference Carolina championship and qualified for the NCAA Div. 2 tournament. Abed, a guard-forward, played 20-plus minutes per game.

“Coach Brunelli taught me a lot about myself,” said Abed. “I really appreciated that. He was the first coach to look me in the face and say, `I believe in you.’ It felt really good to play and help a team win.”

It was not a straight shot from being a solid high school player to getting settled into a college program for Abed. But she said she would not change any of the experiences, good or bad, she went through to get to that point.

“I honestly would not trade the experience for the world,” she said. “I was at a great university at Marion and made great friends. I still keep in touch with them. “

A scholarship was not in the plans, at least not at the start, for Langley High graduate and current Elon University rising football senior Jeff Allen.

Allen, who played the physically demanding center position on the offensive line for Langley under coach John Howerton, had selected Elon (Southern Conference), a Div. 1AA school in North Carolina, as the college of his choice. He wanted to play football, but had not been offered a scholarship from the academically renowned school. So he eventually decided he would try to make the team as a walk-on player his freshmen year.

With the help of Howerton, Allen promoted his football prowess to the Elon coaching staff by sending them a highlight football tape during Christmastime of his senior year in high school. But he had not heard back from the football office.

It turned out that the Elon football program was at the time in the middle of a coaching change. Allen found out later his tape had likely been tossed aside.

But, not to be discouraged, Allen sent a second tape to the new coaching staff. He was informed, however, that the new recruiting class had already been selected. He was told he could try out for the team as a walk-on with scholarship money possibly available down the road if he made the team.

Allen did, in fact, make the team as a backup center. Not only that, he got put into a week-four game at Appalachian State (Boone, N.C.) that freshmen season, when Elon’s starting center was ejected.

Allen played well that day and started the next week in Elon’s home game against Western Carolina.

“That went well,” Allen recalled, of his first collegiate start. “I played well, to tell the truth.”

He started a few more games that freshmen season before being relegated to the bench following a tough outing against Wofford College (Spartunburg, S.C.).

“I had trouble that game with the defensive schemes they were throwing at me,” he said. “We had trouble as a line.”

For the remainder of his freshmen season, Allen played a backup role with sporadic playing time, but it had been a successful first season for him. His play, in fact, had earned him a scholarship.

“My two goals [as a freshman] were to get onto the field and to be a scholarship player,” said Allen.

He began his sophomore year as a starter, but a week-one ankle injury resulted in him missing more than half the season. He did return to start Elon’s final four games.

Last fall as a junior, it all came together for Allen, who started all 12 games for the 8-4 Phoenix, who barely missed the playoffs.

Now, Allen, a business administration major with a concentration in management, is finishing his junior academic year at Elon and looking forward to next fall when he will play his senior season. One of his goals is to garner All-Conference honors at center. His team goal is for Elon to be conference champs.

However his final year goes, his college football career has been a huge success.

“I basically came from out of the blue,” he said, remembering that walk-on freshmen season. “I just kind of showed up.”

He said that underdog start to his career made him hungry to earn a scholarship and to succeed at the collegiate level.

“It definitely helped me and kept me competing all year long,” said Allen, who has played under Elon coach Pete Lembo throughout his career. “I knew I couldn’t slack off. I had nothing guaranteed.”

Allen credits his high school coach, Howerton, with preparing him for college football and the rigors of line play.

“His practices were set up [to teach] line technique,” said Allen, a two-time, First Team All-Liberty District center at Langley. “There was a good work ethic. It made a huge difference for me. I knew I was going to be ready for college [football].”