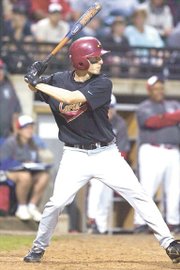 After an impressive showing at a recruiting showcase, Bishop Ireton senior Frankie Zare was able to direct interested college coaches to his beRecruited.com profile to watch more video of him in game action. 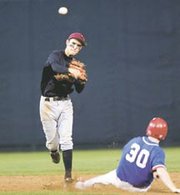 Bishop Ireton shortstop Frankie Zare was a second team all-WCAC selection last year and is hoping to play Division-I baseball next year. He has his list narrowed down to Temple, Eastern Kentucky, and St. John's. Here is pictured during last year's WCAC championship game against DeMatha.

Mount Vernon seniors Shaquille Thomas (right) and Johnathon McMillon (left) have received lots of attention from college coaches thanks to an internet recruiting service. Here they are pictured handing off the baton during their first place run in the 4x200-meter relay at this year's National District Indoor Track and Field Championships in Arlington.

Mount Vernon senior Johnathon McMillon (left) got a scholarship to run at Virginia State University next year thanks in large part to the online recruiting service, beRecruited.com. which allowed him to post academic and athletic achievements, as well as video for coaches to look over.

Even before they became two of the top runners in the Mount Vernon High School track and field program, seniors Shaquille Thomas and Johnathon McMillon did everything together.

Thomas, who lived on Fort Belvoir military base between 1999 and 2005 began running in 2000 in a program on base that his mother helped coach. He convinced McMillon to join him two years ago.

So it should come as no surprise that as they chase dreams of running track in college, the pair has decided to go through the recruitment process together.

But the two don’t look to be the prototypical recruits who make a college coach salivate. Neither has finished better than third at the Northern Region championships during the outdoor or indoor track seasons and both have thus far qualified for the state championships just once, each finishing outside the top-15.

That’s why last year towards the end of indoor track season, McMillon’s father, Ron, took his son’s recruitment in a direction many in this area and around the country have — to the Internet.

One day while surfing the web checking out track results, Ron McMillon stumbled upon a service called beRecruited.com, one of several online services that, for a fee, helps connect high school athletes with college coaches.

Almost immediately, Ron McMillon set up accounts for both his son and Thomas, posting video he had taken from meets to the web. A year and a half later, Thomas has received interest from more than 20 colleges, while Johnathan McMillon is slated to attend Virginia State University on a track scholarship next fall.

“Usually, they wouldn’t get this kind of attention unless they were some one-of-a-kind talent,” said Crawford. “The kids who don’t make the newspapers need something like this.”

&lt;b&gt;PART OF THE REASON&lt;/b&gt; Avi Stopper got out of coaching college soccer at the University of Chicago was the misconception he perceived from recruits and their parents about how to get noticed on the recruiting trail.

A co-founder of captainU.com — which offers a somewhat similar service to beRecruited.com — and the author of a free e-book on recruiting called “Make the Team,” Stopper thinks parents and athletes sometimes don’t understand how college coaches think.

“A lot of people have the mentality that the way recruiting works is you go to showcase tournaments and then you get recruited, but that’s really far from the reality,” said Stopper. “There are 1,000 players at any given showcase and 50 college coaches and the odds of a college coach seeing you play randomly when you’re doing something great is really slim.”

Stopper’s website, captainU, is a web-based software that helps student athletes through the recruiting process, helping them devise a step-by-step strategy to pursue athletic opportunities after high school.

Potential recruits can create a profile on the site for free, but for $39.95 a month, captainU advertises access to 15,000 college coaches, one-on-one counseling and a personal recruiting coach.

“The best way is to really commit to a self-marketing campaign,” said Stopper. “That’s an intimidating process for kids, but you need to prove that you’re serious. … What we see is coaches love kids who do this. It removes a lot of the work for them.”

&lt;b&gt;MAKING LIFE EASIER&lt;/b&gt; on college coaches and potential recruits is why beRecruited was started back in 2000 and it hasn’t veered very far from that objective. The concept began because there was no efficient way for athletes and coaches to connect.

Now the company has more than 150,000 athletes nationwide using its service, including 190 from Alexandria, 107 from Fairfax, 53 from Arlington, 31 from Reston, and 27 from McLean.

Jeff Cravens, the President of beRecruited, thinks the best evidence of just how many people need help with recruiting is seen in the site’s newest service that allows parents to register to the site. In less than a year, more than 11,000 adults have signed up. Cravens said 60 to 70 percent of parents that use his service are usually going through the recruiting cycle for the first time.

“I just think that this is a great place where you had a very inefficient process for years,” explained Cravens. “I think people are getting more and more used to going online and finding the information they’re looking for. We just give them a place to do that.”

Unlike captainU and its step-by-step guidelines to getting a coach’s attention, beRecruited is more social network than service. For free, athletes can set up profiles with their interests, academic performance, and athletic achievements as well as post photos.

To get the deluxe package, including the ability to post video clips for coaches to see, prospective recruits must pay a one-time fee of $39.99. Cravens refers to profiles as “professional digital resumes. It’s hard work, not goofing around,” Cravens said.

&lt;b&gt;IT HAS BEEN A LONG&lt;/b&gt; process for Bishop Ireton shortstop Frankie Zare as he pursues a Division-I baseball scholarship. An all-WCAC second team selection as a junior last year, Zare has been actively self-marketing himself since last summer.

He has gone to several showcase camps, has his own beRecruited profile with uploaded videos, and has followed up with more than 100 emails to various college coaches around the country. All of that hard work came to a head last Monday, when members of Temple University’s coaching staff came to watch Ireton’s 5-4 win over St. John’s.

Although, Zare had one of his worst games of the season at the plate, going 0-for-3, it didn’t much matter because the Temple coaches had already seen plenty of him in advance.

“I wasn’t really nervous because I knew they already knew what I was capable of, so I just played my game,” said Zare, who hasn’t received an offer yet, but has narrowed his list down to three schools — Temple, Eastern Kentucky, and St. John’s. “But I wasn’t sure if he was coming or not, so if I had known for sure he was going to be there, I would have been a lot more nervous going in.”

Zare first got noticed by the Temple coaching staff at a showcase camp in Woodbridge, Va. He then directed them to his beRecruited profile, so they could check out game footage his father, Victor had posted.

Victor Zare said he considered hiring a recruiting agency that would have put together a professional highlight reel for Frankie, but once he heard the price tag of between $500 and $2,000, he simply began filming his son’s games with his own video camera and posting them to the web via beRecruited.

After the Temple coaches saw Frankie’s video clips, they invited him up to their own camp this past summer. They liked what they saw enough to make the trip down last week.

“After going through this, I think the best way to get recruited is with video,” said Victor Zare, who said the Temple coaches promised to get back to them by mid-April. “You can reach out to so many coaches. At these camps and other things, some just didn’t even notice Frankie. They send notices like you’re really important but then you show up and there are hundreds of kids.”

Sites like beRecruited and captainU are not for the type of athlete that will demand the attention from North Carolina basketball or USC football. As Stopper puts it, “The Dukes of the world have their stuff figured out, they know who they want to go after.”

&lt;b&gt;STILL, THERE&lt;/b&gt; are detractors. Bill Finney, the athletic director and women’s basketball coach at Division III Marymount University in Arlington calls recruiting websites “a waste of money,” especially for student-athletes trying to make it to the Division-I level.

He says coaches are more savvy than to believe clips on the web that create the illusion of a basketball player with a 100 percent shooting percentage or a soccer player whose every pass results in a goal. With the chances of a professional sports career after college slim to none, he thinks recruits should be focusing on everything but athletics when looking for the right college.

“Instead of throwing away all this money, put the responsibility on your kids. Families can do all this on their own. All they have to do is research what colleges match both their academic and athletic needs and reach out to them. A lot of people are expecting someone to call them up and say we want you, but that’s just not how it works.”

&lt;b&gt;WHETHER RECRUITS&lt;/b&gt; and their families want to do it themselves or get some outside help, the end result they’re seeking is the opportunity to continue athletic careers beyond high school.

The route people take to get there, though, is up for debate. Even beRecruited’s Cravens admits his site isn’t the end all for college recruiting.

“There’s no one way to go about recruiting that works for every coach because coaches are no different than any other people,” he said. “They think about things differently. Whether it’s emails or phone conversations, they’re just looking for information, they’re like anyone else. They don’t make bad decisions, they just make decisions without information.”

Now that McMillon and Thomas and their journey from high school athlete to college freshman is near its completion, Ron McMillon has begun encouraging Mount Vernon junior Clive Cameron — a talented track and field athlete that qualified for last year’s outdoor AAA state meet in two events — to create his own beRecruited profile.

And although neither Thomas nor McMillon knew much about how the web has changed recruiting before they began their college search, the results speak for themselves.