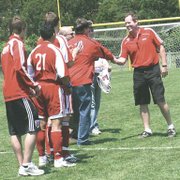 A year removed from its magical spring of 2008, the Herndon High boys’ soccer program is experiencing a less glamorous season and winning fewer games. Nevertheless, this younger Hornets’ squad, while not the powerhouse, veteran team of a year ago, is taking nice strides forward in its development.

"This team is playing at the level of its ability right now," said Herndon coach Sean Lanigan. "They’re very young, so we’re trying to sort out how to play at the varsity level."

Last year, Herndon re-established itself as one of the Northern Region’s best teams, capturing the Concorde District title, advancing to the Northern Region quarterfinals and finishing with an overall record of 15-2. It was a season in which Lanigan, who had led Herndon to three region titles between 1996 and 2000, returned for a second stint as the program’s head coach.

The 2008 team’s anchors were star players Sean Murnane and Christian McLaughlin, neither of whom is still with the team. McLaughlin, a center midfielder, graduated last spring, and Murnane, a potent scoring forward who began his high school career at Westfield before transferring to Herndon prior to his junior year, has returned to Westfield for his senior season.

So, from the start this spring, it has been a different-look Herndon outfit, which has utilized as many as five freshmen starters at times.

"We’re trying to get the [team] to understand what the game plan is and how to execute," said Lanigan. "It’s a slow process."

But the coach likes the way his Hornets have grown over the course of the season. Herndon lost to talented Robinson, 3-2, Thursday, April 23 at home. Even in the defeat, Lanigan was impressed by the things he saw from his squad.

"Robinson is a powerhouse team and we showed we could play with them," said the coach, whose team received goals from senior striker Uwem Etuk and freshman striker EK Korvah in the setback.

Herndon, following the loss to the Rams, had an overall record of 4-3-1. Lanigan said this year’s challenge as a coach exceeds last year’s scenario when he was making his return to the program.

"Last year, we put out a game plan and the kids knew how to execute it right away," said Lanigan. "This year, you get a lot of stares into space like, ‘What’s [the coach] talking about?’ But we’re on the brink of coming out of the shell."

Lanigan said it took about half of this season to figure out the best positions for a number of his players. But things are coming around nicely for the Hornets, whose wins this spring have come over Marshall, 3-0; Falls Church, 2-1; cross-town rival South Lakes, 2-1; and Fairfax, 2-0. The tie came against Arlington’s Washington-Lee, 1-1, in a non-district home contest on April 17.

"We’re just now figuring out where we are [as a team]," said Lanigan. "I think we’ll peak. Hopefully, we’ll reach regionals."

Going into this week, Herndon had three regular season games remaining on its schedule, including district contests this week against visiting Westfield on Monday (April 27) and host team Oakton on Thursday.

&lt;b&gt;HERNDON’S KEY PLAYERS&lt;/b&gt; this season have included team captains Alex Darwiche and striker Etuk. Darwiche, the team’s most vocal leader, has played solid soccer at his right back position. Herndon lost important defenders to graduation last spring, so Darwiche was moved to a defender position this spring.

"We wanted Alex in the back to lead. He’s played there for me with [McLean Premier U-18]. He doesn’t like it as much. But he’s been an inspirational, fired-up player who is trying to [rally] the younger arms," said Lanigan, of Darwiche’s leadership with the younger players in the back. "He’s provided us a spark."

Utuk, meanwhile, has quietly put together an outstanding season. He has shown his leadership by his consistent effort and play on the field. He has scored three goals, but has been especially outstanding as an assist man. He has a knack of getting teammates the ball in the right position and time.

"He’s quiet and very gifted," said Lanigan, of Utuk. "He has led with his ability to play on the field."

Utuk, who plays club ball for the D.C. United 18-under team, has already committed to play soccer on scholarship at the University of West Virginia next school year. "

"He’s extremely fast," said the coach, of the tall, lanky Korvah. "Uwem has set him up and he’s hitting his one-on-one [chances]. He does have a nose for goals, and gets himself in good position."

&lt;b&gt;HERNDON HAS RECEIVED&lt;/b&gt; a lift from junior Patrick Ramos, who saw little playing time last year in his position as back-up goalie. Ramos expressed a desire to Lanigan to get more playing time this season. With returning goalie starter Alex Stopa back in the net, Lanigan tried Ramos out at a center back position, and he excelled.

"He was our back-up goalie last year and sat on the bench," said Lanigan, of Ramos. "I threw him in [at center back] one day [earlier this season] and he has really stepped up and done real well. He’s surrounded by young players.

"Patrick just wanted to play," said the coach. "He said, ‘I just want to get on the field.’ He had that mentality and adapted real well [to the new position]."

Ramos, while now a fixture at center back, remains the team’s back-up goalie if the need should arise.

Stopa, a junior, has had a good season in the net. Lanigan said the netminder, at times, has been too focused on the younger, less experienced defender teammates in front of him.

"He’s having a decent year," said Lanigan. "A goal keeper of his caliber shouldn’t have allowed two goals [on set plays] like he did against Robinson. He’s worried about the players in front of him. I feel he’s spending too much time where they are. Last year, he didn’t have to worry about that."

Lanigan is confident Stopa will play well from here on out and be a key factor in Herndon’s bid for a sustained postseason run in the weeks ahead. The Hornets, while young, have made big strides and could be one of the region’s more dangerous region tourney entries should they qualify.