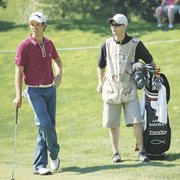 Mount Vernon resident Ron Fitzsimmons is one of several members of the Mount Vernon Country Club that has volunteered over the years at the AT&T National. Fitzsimmons served as a marshal on the 7th hole last week.

Fitzsimmons has served as the chief volunteer marshal for the past three years on the par-3 seventh hole of Congressional’s Blue course. Each year, at the request of the Tiger Woods Foundation, he has matched military personnel with PGA Tour pros during the annual pro-am. The pro’s regular caddie turns over the bag to a serviceman, each of whom wore a camouflage combat caddie bib, for the duration of the hole.

“It’s a wonderful event,” said Fitzsimmons. “The soldiers, sailors, and airmen love it, the pros are fully supportive, and the gallery enjoys the change. “I love it too,” said Mike “Fluff” Cowan, Jim Furyk’s caddie. The 61-year-old gratefully gave up Furyk’s heavy staff bag for the hole.

Alexandria resident Austin Mosher, a Navy petty officer stationed at Andrews Air Force Base, drew two-time tour winner Aaron Baddeley. As the pro arrived at the seventh tee, Fitzsimmons introduced Mosher to the crowd, and then had Baddeley and his guest caddie pose for photographers. After Baddeley and his amateur partners hit their tee shots, Mosher shouldered the bag. He and Baddeley then chatted as they walked up the hill to the green.

“We talked about our kids,” said Mosher, who has two with a third on the way. “Aaron was really nice and fully supportive of the military.” The Australian Baddeley was born in New Hampshire, but moved to Australia at age two. Asked for his reaction after holing his par putt, Baddeley said, “[The caddie program] is a great idea. Absolutely great.”

Mosher is an aircraft mechanic serving in a squadron that flies Navy VIPs on official trips throughout the country and abroad.

Marine gunnery sergeant Michael Barrett hit the caddying jackpot, though. He carried for Tiger Woods and Anthony Kim. Kim was so appreciative that he gave Barrett a sand wedge, one complete with the initials “A.K.” next to the Nike swoosh.

&lt;b&gt;AS EXPECTED&lt;/b&gt;, Woods cheerfully posed with Barrett on the tee, and then, turning back to business, stiffed his shot to within six feet of the cup. One of his amateur partners, Dallas Cowboy quarterback Tony Romo, put his ball inside Tiger’s. That changed the gallery’s polite boos to cheers. With caddie Steve Williams observing, Woods walked with Barrett to the green.

“I was a little nervous, but Tiger was really down to earth,” Barrett said afterward. “We talked about our families.” On the green, Barrett was dumbfounded when Tiger gave his putter to him and said, “Here, you make it.”

Although Tiger gave him the line, the novice golfer putted the ball through the break on the super fast green, running it five feet past. Tiger then picked up, and backed away for Romo’s attempt. The Cowboy also gave his putter to Barrett, but the Marine missed that one, too. Nevertheless, reporters and cameramen mobbed Barrett.

Before moving on to the eighth tee, Woods pulled on his golf glove and wrote a personal note to Barrett on the palm. He gave it and a hug to Barrett.

Barrett was severely wounded in Iraq and spent almost two years in rehabilitation. He has recovered and regained full duty status. He is stationed at the Pentagon.

Fitzsimmons, who works on the staff of Mount Vernon’s county supervisor Gerry Hyland, calls upon other Mount Vernon Country Club members to marshal the seventh hole. He also presides over a more informal program during regular tournament rounds. Fitzsimmons invites small children to sit on the tee inside the ropes to watch the pros tee off.

“They get a real charge out of being so close,” he said.