Not many college ballplayers are familiar with wood bats; count these two Aces among them. 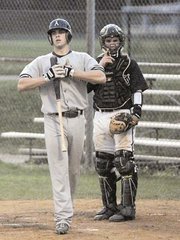 Landon Joost reacts to his first-inning strikeout during the Alexandria Aces’ 9-2 loss to the Herndon Braves on Friday, June 29. A third baseman, Joost is hitting .200 (7-for-35) this summer.

There are few pursuits that Landon Joost and Brad Johnson are more equipped to conquer. As members of the Yavapai College baseball team, Joost and Johnson play for one of the few collegiate programs in the country that exclusively uses wood bats.

And this summer, Joost and Johnson have taken that experience and brought it to Alexandria where they’ve suited up for the Aces. Alexandria plays in the Cal Ripken Sr. Collegiate Baseball League, an organization that requires its members to use wood bats.

The differences, Joost points out, are endless. Wood bats have a smaller sweet spot, meaning the area where optimal contact can be made is not as large. And there are also the weight distribution discrepancies. With aluminum bats -- or any other type of composite bat that’s becoming increasingly more popular -- the weight distribution is such that it feels like the hitter is swinging a broomstick, the wood bat more like a pipe.

Aluminum bats also afford hitters a chance to cover their mistakes. With wood, poor swings are blown up and seen with crystal-clear resolution. With aluminum bats, those mistakes are overshadowed, often, by a chopper that has enough on it to elude an infielder or a jam shot that’s just deep enough to drop behind the first baseman.

In other words, the true talent of a hitter cannot be measured by aluminum. Only wood.

“You definitely have to square the ball up,” Johnson said. “You have to put it right on the barrel. With metal bats, you can make mistakes, get jammed and hit balls off the end of the bat and you can still hit the ball decently. With wood bats, if you don’t put the ball right on the barrel the bat’s gonna blow up in your hands.”

&lt;b&gt;JOOST AND JOHNSON&lt;/b&gt; are two of several Aces who’ve struggled to adjust to life during the summer. So far this spring the team is sporting a 7-10 record and had lost three straight games before Wednesday night’s contest against the Bethesda Big Train, which ended too late for this edition.

Part of the problem, manager Eric Williams said, was that his players’ eyes have grown collectively larger with the assortment of high school fields that the team plays on. Whether it’s Four Mile Run Park or Paul VI or Herndon high schools, the fences are often shorter all the way around the outfield than what many of the college players are used to.

The shorter fences and the appearance of an easy home run can cause more than a few unnatural swinging habits; an uppercut of a swing or players topping too many balls are generally pretty good indications of swinging too hard.

“I think the guys are just starting to get the concept down that there’s more to it than getting here and seeing how far you can hit it,” Williams said.

&lt;b&gt;AT YAVAPAI,&lt;/b&gt; which plays in the Arizona Community College Athletic Conference, Joost and Johnson were used to the desert heat. One-hundred-and-twenty degrees was not all that uncommon and it wasn’t very humid.

Here, both have had to adjust to the constant moisture in the air. Not only can it become uncomfortable, it’s also something that the duo said can affect their wood bats.

On an unseasonably humid day, the wood bats will retain moisture and become heavier. And when a pitch is coming at 90-plus miles-per-hour, every fraction of an ounce is critical.

“Some guys have swung wood bats before so they know what they’re doing, but for some it’s the first time,” Johnson said. “So it’s taken them a little bit longer to make the adjustments.”

Joost, who had a slow spring at Yavapai before erupting this past spring with a .358 batting average and a .731 slugging percentage, said that he loosened his grip on the bat a bit, enabling an exaggerated whipping action to occur when the bat travels through the strike zone.

“It’s taken some getting used to,” Joost said. “If you’re a good hitter, you can take a wood bat, put it in your hands and in a couple of days get used to that.”