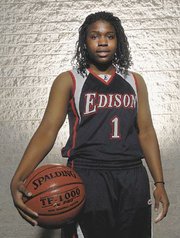 Myisha Goodwin, a junior guard on the Edison girls’ basketball team and a first team All-Connection pick, averaged 25 points, five assists and seven steals per game for the Eagles.

Drew Courtney, a Robinson Secondary School graduate and currently a freshman on the University of Virginia men’s tennis team, is 18-5 this season in singles play while his doubles teams are a combined 14-6. Perhaps most impressive, the Cavaliers are ranked No. 1 in the country. The Cavaliers improved to 17-0 overall (3-0 in the Atlantic Coast Conference) with two wins on Tuesday. On the girls side at Virginia, fellow Robinson graduate Lindsey Hardenbergh, who graduated with Courtney, has a record of 14-4 this season, with her doubles team amassing an 11-4 combined mark. The No. 20 Virginia women’s tennis team is 9-2 this season, 2-0 against ACC competition.

Nearly three weeks into his collegiate baseball career, W.T. Woodson graduate Jacob Morley has surged to the top of VMI’s hitting statistics. With a .311 batting average (14-for-45), Morley had the third-best such mark on the team, while his nine RBIs are good enough for third. In 25 chances from his center field position, Morley has yet to make an error. As of Tuesday morning, the Keydets were 6-7, with a 4-3 win Tuesday over Norfolk State. At W.T. Woodson last spring, Morley was named the Liberty District’s Player of the Year while hitting .439 with a .621 slugging percentage and a .519 on-base percentage. He also scored 17 runs and drove in 12. Morley, who split Liberty District Player of the Year honors as a junior, has been named All-Northern Region twice.

The novice, intermediate and 12-and-under age group teams of the Northern Virginia Nereids synchronized swimming club opened their competition season on Sunday, Feb. 22 at the Have-A-Heart Invitational in Laurel, Md. Top performances by the Nereids propelled them past other teams from Pennsylvania, Maryland and Virginia.

The 12-and-under age group dominated the team routine competition, besting both the Potomac Valley Pearls and NoVa Synchro to earn first-place honors. Swimming to a tropical theme, the Nereids’ earned the second highest team routine score of the entire meet. The duo of Ashley Eberly and Stephanie Satterlee and the trio of Connie Polnow, Leina Thurn and Mikaela Voegele both took second in their respective divisions.

In the 13- to 15-year-old intermediate age group, the Nereids took the silver medal in team routine competition, missing the gold medal by less than a point. In the 11- to 12-year-old age group, two teams placed third and fifth.

The 13- to 15-year-old intermediate trio of Roha Poputya, Erika Carlson and Julia Guidry placed second. Furthermore, Carlson is only 9 and Guidry is 10.

The novice duet of Miya McDonald and Maja Guidry was the highlight of its respective competition, taking first place by a sizable margin with a routine set to the music of “Kung Fu Panda.”

The Nereids are the oldest and largest competitive swimming club in Northern Virginia. The team is comprised of swimmers between the ages of 7 and 18 from all over the Washington, D.C. area. For more information on the Nereids, visit the organization’s Web site at http://www.nvnsynchro.com.

The BRYC Tar Heel AAU basketball program is seeking players and coaches for the upcoming spring-through-summer season. For more information, visit www.brychoops.org or www.tarheelsbasketball.org for tryout dates and program information. Contact Jim Watson at 571-243-4142, Parker Roach at 703-627-0380 or Rocky Carter at 703 855-7614 for additional information.

Children and Adults With Attention-Deficit/Hyperactivity Disorder (CHADD) will offer a program titled “Martial Arts for Kids with ADHD” on Wednesday evenings throughout March. The program is free and will focus on aspects of Tae Kwon Do and Brazilian Jiu Jitsu, as well as grappling and wrestling. The program will be taught by the chief instructor at Carl Runk’s World Karate and by an award-winning high school wrestler, grappler and Brazilian Jiu Jitsu competitor who was diagnosed with ADHD 10 years ago. The program will run from 7:30-8:15 p.m. at Carl Runk’s World Karate at 9537 Braddock Road. To register, visit www.novachadd.org.

The American Icebirds, a AAA ice hockey team, are looking for players ages 14 to 18 in all positions for spring and summer competitive tournament play that runs from May to July. Interested players should call 703-400-2343 and ask for coach Kulla or send an e-mail to icebirds@inbox.com.

The NOVA “NFL” Youth Flag Football League will conduct its 12th annual Flag Football Summer Camp in Ashburn the week of June 22-26, with a second week Aug. 3-7. Both camps run from 9 a.m.-12 p.m., for children ages 6 to 12. The camps, aimed at teaching football in a fun environment, will feature experienced adult head coaches as instructors, local high school and college football players as camp counselors and visits by current and former Washington Redskins and other guest speakers. The camps will conclude with end-of-the-week flag football games and a speed, power and agility training session performed by certified fitness instructors from Dynamic Sports Performance. The camp will include visits by current and former Washington Redskins players and other guest speakers. To register, visit www.novaflag.com.