Westfield’s Zhang Back for More
Votes

Westfield’s Zhang Back for More

With Concorde District tourney under way, local netters look to make their mark. 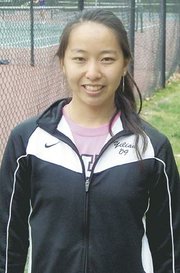 During first-round play at Robinson Secondary School on Tuesday afternoon for the Concorde District girls’ tennis tournament, Westfield senior Yilian Zhang did what amounted to a victory lap, though it wasn’t done with the intention of showing off or drawing attention to herself.

The complete opposite, really.

Shy and soft-spoken, Zhang finished her 10-0 win over Herndon’s Phuong Nguyen so quickly that she had time to wander slowly around the chain-link fence, watching other players that she may face in the days ahead.

That Zhang is even playing on the high school circuit comes as a bit of a shock this spring. After winning the Concorde District, Northern Region and Virginia AAA state titles as a sophomore, Zhang spent her junior year playing United States Tennis Association (USTA) matches and focusing on the college recruitment process.

It worked. Zhang earned a scholarship to play tennis this fall at East Carolina University. But, before she departs, the talented player has her sights set on replicating that sophomore sweep.

“I really want to win again,” said Zhang, who is 13-0 this season and has not allowed her opponents to take more than six games in the process. “I think there’s more pressure because it’s the state champion coming back and I want to prove myself.”

&lt;b&gt;FOR THE&lt;/b&gt; first time in seven years, Chantilly’s girls’ team did not advance to the Northern Region tournament, but for the first time in three, the boys’ team did. While the girls’ team started off this spring by winning five of its first seven matches, the Chargers finished up at 7-5 and just missed that top-two finish.

“We just had a lot of new kids playing together,” head coach Karen Kegerreis said. “We were always alive going into our doubles matches, so we always had that shot. But when it came to pulling out wins when it counted, we couldn’t pull them out.”

The boys’ team, meanwhile, got stronger as the season wore on, according to coach Doug Kegerreis, who splits the Chantilly coaching duties with his wife. And though the Chargers suffered what would appear to be back-to-back losses to Robinson at the end of the season, one match kept getting postponed throughout the season.

“Our team improved,” Doug Kegerreis said. “They got in better shape and their shot selection was better. They kept believing.”

That belief has Chantilly (8-4) eagerly anticipating the regional tournament, which is scheduled to begin on May 12. In the meantime, David Yang and Eric Shih both dropped first-round singles play decisions.

&lt;b&gt;AS A FIRST-YEAR&lt;/b&gt; coach for Westfield’s boys’ tennis team, Tracy Castleburry instituted a policy that she hopes others will follow. Castleburry had 32 players come out for tryouts and had 32 players on the first day of practice, instituting a no-cut policy.

Others sports such as track and field and swim and dive hold this same ideology, arguing that if the students are already playing the sports, why not allow them to represent their school?

“If kids want to be out there playing tennis -- and a lot of them work on their game during the course of the year -- that doesn’t seem fair to cut them loose once the season starts,” Castleburry said.

“When you get three courts, and you have a varsity team that you want to work with on specifics, if you have 20 other kids who are not necessarily at the varsity level yet, there’s a balancing act,” she continued, “and some people aren’t willing to do it. I’d say at times I’ve done it well, and there were times where I didn’t do it so well.”

Castleburry was pleased that overall her team’s play was consistent, and never did the Bulldogs seem overmatched. Westfield finished its season at 8-4 but missed out on regionals because it lost twice to second-place Chantilly.

On Tuesday afternoon, Will Datta won his first-round match -- despite trailing 9-3 at one point. Datta rallied back to force overtime and eventually escaped with an 11-10 win, advancing to Wednesday’s second round, which ended after this edition went to press.