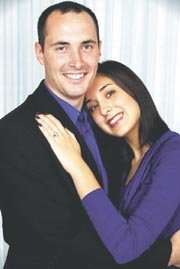 Mr. and Mrs. David M. Ford of Fairfax Station are pleased to announce the engagement of their daughter, Christina Anne Ford to Carl Frank Puleo III, son of Charlene Puleo and the late Carl Frank Puleo Jr. of Westminster, Md.

Both Christina Ford and Frank Puleo are graduates of the University of Mary Washington. She is employed at Stuart Weitzman in the Tysons Galleria and he is the campaign manager for a local congressional candidate.

A November 2010 wedding is planned in Vienna