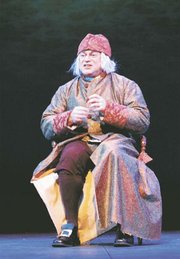 The Arlington Players tackle a serious drama, Peter Shaffer’s intellectually challenging play of genius and jealousy, "Amadeus," at the Thomas Jefferson Theatre through Feb. 13. The play provides a host of interesting questions about the nature of creativity. It can be an engrossing evening of ideas explored in lively language, and the production is successful with some of them but fails to reach the heights that the play deserves.

One of the more talented directors working in community theater in Northern Virginia today, Zina Bleck, is at the helm, and in the two leading roles, she has two actors with proven track records with challenging material like this. Michael Kharfen, who richly deserved his WATCH Award for a superbly moderated and ultimately searing performance as the accused killer of Charles Lindbergh’s baby in "Kaufman," hits just one level of emotion all night long as the merely competent composer Antonio Salieri. It is an exhausting high that leaves him little room to react as Salieri recognizes that his competence pales to insignificance when compared to the genius of a Mozart.

Tom Witherspoon has also earned respect for his on-stage skill, but he too seems to have but one note to play as Wolfgang Amadeus Mozart. He plays him as the immature genius whose greatness drives Salieri to at least contemplate geniuscide. In his hands, however, it becomes questionable whether Salieri would poison Mozart because he can’t stand the comparison with his talent or simply because he can’t stand the little twerp. While it is true that Shaffer’s script leaves less room for the actor portraying Mozart to moderate his moods than the actor playing Salieri, the contrast between Mozart’s genius and his boorishness needs to become clear at some point in the proceedings.

Mari Davis is Mozart’s wife who is willing to put up with his infantile sexual and social behavior in her search for the social and financial security she assumes genius will accrue, and later, to yield to the demands of Salieri in order to advance her husband’s prospects.

Bleck spreads the action out over the wide stage of the Jefferson. She has Katherine Biscuca, Marji Jepperson, Gail Seavey and Jessica Sperlongano as a late baroque version of a Greek Chorus commenting on the action in full court regalia while Cal Whitehurst prances satisfyingly as the royal Joseph II whose court supports the artistic life of Vienna. The court includes Dell Pendergrast, Michael Gerwin and Steven Feder who each create a believable count or baron with distinct personalities.

As with his other plays, "Equus" and "The Royal Hunt of the Sun," Shaffer takes liberties with historical fact in the search for artistic truth. If you want a lesson on Mozart’s life and death, there are better sources than this play. If, on the other hand, you are interested in an exploration of such questions as "how a kind and benevolent God can distribute his blessings so unevenly" or "why great talent can reside in less than great individuals" this is an evening well spent.