Building on Mars at Kent Gardens 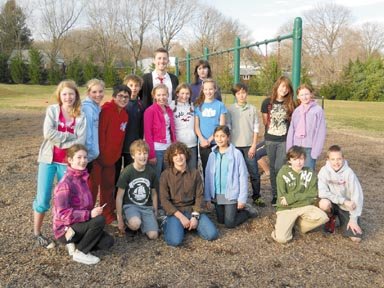 Jay Crowell and his sixth-grade class at Kent Gardens Elementary School participated in the Architecture in Schools program this past fall. Lori Baker

“Precise” is not a word that sixth graders typically use. But the word pops up often when speaking to sixth graders from Jay Crowell’s class at Kent Gardens Elementary. That’s because these students were selected to participate in a program sponsored by the Washington Architectural Foundation, in collaboration with the Northern Virginia American Institute of Architects. As a result, Crowell’s students couldn’t wait to share their excitement about the program, and their new understanding of the role of precision in design.

“Our mission is architects serving the community,” said Beth Judy, Program Manager for the Washington Architecture Foundation. “It’s bringing a lot of joy and love of learning into the classroom. They just learn so much, and they learn about a new profession as well,” she added.

The program teamed Crowell’s class up with McLean’s award-winning architecture firm, MulvannyG2 Architecture. A handful of architects came every week for a nine-week term to share presentations, lectures, hands-on building, and fun. The idea was to encourage the children to be analytical and creative.

MulvannyG2 integrated its lessons with the sixth grade curriculum, which last quarter happened to be astronomy. So the goal became to build a community on Mars. Using Google Earth the children selected a site on Mars that they thought would be hospitable to a living community. Sixth grader Camille Duffy described one of the many challenges: “The architects made a real model of the ground, and there were lots of bumps. We had to make it so it would stand on those bumps. And we had to think of the environment and the atmosphere.”

THE STUDENTS were broken into small groups to plan, design and construct their models. Duffy’s team made a water purification plant. “And then inside for excess water we did rows of plants so the water would not overflow, and we had pipes going through the building. Plants were to absorb because it was all indoor. We had to get plants to get food.”

MulvannyG2 also benefited from the program. There was no shortage of volunteers to visit the school each week. And though there was a small stipend provided by the Washington Architectural Foundation, the architectural team raised money on their own to help purchase supplies for the kids.

“We were hoping to make them aware of some new technologies of the sustainable design and community planning,” said Gina Volpicelli, Project Coordinator for MulvannyG2 Architecture. “We had brainstorming sessions on what buildings they wanted in their city, and they came up with a list of what they thought that a city needed to function. Especially putting it on Mars, they were coming up with greenhouses, water, plants that it would need to sustain a community on Mars. So it was interesting.”

MulvannyG2, a Seattle-based firm with an office on Westpark Drive in McLean, has been in the business of retail design for about 30 years. It has a reputation as a charitable firm, and is supportive and active in the community. “I think it was just a good opportunity for us to teach and share what we do every day, and make the kids more aware and observe their environments. Everyone who participated said that they had a great time.”

Fellow student Tommy Schilder said, “Each building we built had to either capture water, let natural light through or have solar energy,” he said. Schilder’s team built a police and fire station. “On my police fire station I had see-through walls, and some windmills and solar panels. And it really taught me a lot about architecture. You have to be very precise. You have to have the correct measurements and the right tools to do the job.”

From left: Gina Volpicelli and Brian Kendell of MG2, sixth-grade teacher Jay Crowell, and Doug Brookbank of MG2. The MG2 volunteers “often find new innovative ideas they haven’t thought of themselves,” while working with students.

AS A TEACHER, Crowell appreciates the enthusiasm the program generated. “It’s always good to see the kids excited to learn, period. And this was one of the things that got them riled up. They looked forward to Friday because it was architecture day. They were always aglow when the architects arrived. It did a lot to increase their enthusiasm about school in general, but more specifically, about engineering.”

The Kent Gardens community on Mars project is currently displayed in the MulvannyG2 offices, and will be included in a January showcase, which will feature models from all of the local schools that participated in the program.

In the meantime, students from Crowell’s class will enjoy the new skills that they learned; some, perhaps, even expanding upon their new knowledge. Sixth grader Steven Sheridan has started collecting cardboard to design and construct his own city at home. “I’ll probably just build a couple of houses, and then the necessities of a city,” he said. “I thought it was pretty interesting. I will remember this a pretty long time.”