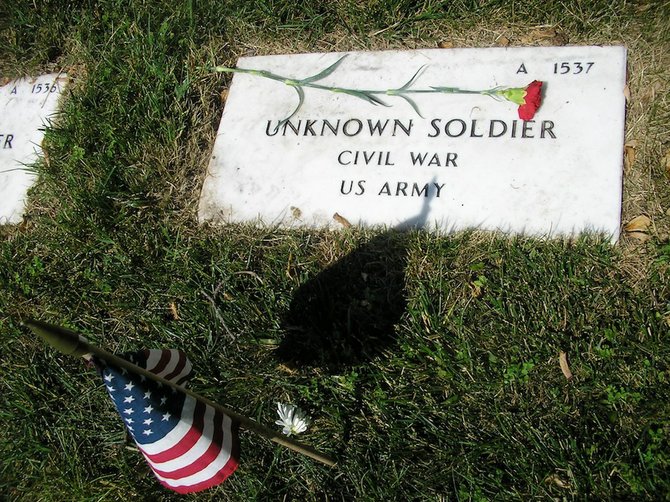 Carnations and flags decorate the graves of 113 unknown soldiers at the Alexandria National Cemetery. Photo by Michael Lee Pope.

The first burial took place in June 1861: Corporal Allen Greely, from Bravo Company of the Vermont Infantry. That event, 150 years ago this summer, would begin a long tradition at the Alexandria National Cemetery. Before the year was through, President Abraham Lincoln ordered 13 more national cemeteries before giving the command to bury the war dead in the rose garden at the Arlington House, the abandoned plantation home of Confederate Gen. Robert E. Lee.

Arlington may be better known. But Alexandria was first.

As members of the American Legion gathered at the Alexandria National Cemetery to commemorate Memorial Day this year, the sesquicentennial of the Civil War loomed large. The Confederates that had once been buried here were later moved to Christ Church Cemetery, creating an eternal separation of Union and Confederate dead. For the veterans of the Lost Cause and their families, the idea that confederates were buried in a Union graveyard was unbearable.

“I can understand how they might feel that way,” said Bill Jones, commander of the Veterans of Foreign Wars post that maintains the cemetery. “But we are united now.”

Of the 113 unknown Civil War soldiers buried at the Alexandria National Cemetery, Jones says some are bound to be Confederates. Bodies were taken from the battlefield to the railroad, then transported into occupied Alexandria. As the train approached the city, bodies were removed at a rail spur next to Christ Church Cemetery.

“Some of those have got to be Confederates,” said Jones in the sweltering late May sun. “No doubt about it.”

MEMORIAL DAY has its origins in the aftermath of the Civil War. Originally created in 1868 by General John Logan, who was then serving as commander of the Grand Army of the Republic, the holiday was originally known as Decoration Day. Since then the Confederates at Alexandria National Cemetery were reinterred and people started calling it Memorial Day. The cemetery eventually took on burials from both World Wars and other major combat operations including the ones in Iraq and Afghanistan.

“Veterans who lie in our national cemeteries can’t tell their stories,” said Col. Bob Patrick during a keynote address at the American Legion ceremony on Memorial Day at the Alexandria National Cemetery. “That’s why we count on veterans like you.”

Patrick is director of the Veterans History Project, a program of the American Folklife Center at the Library of Congress. Speaking to the Legionnaires, Patrick said the recent death of the last surviving World War I solider demonstrates the need for veterans to tell their stories. Now that he’s gone, all the stories from survivors have been told. To underscore the point, he read Archibald MacLeish’s famous poem “The Young Dead Soldiers To Not Speak.”

“They say: Our deaths are not ours: they are yours; they will mean what you make them,” said Patrick, quoting MacLeish. “We leave you our deaths. Give them their meaning.”