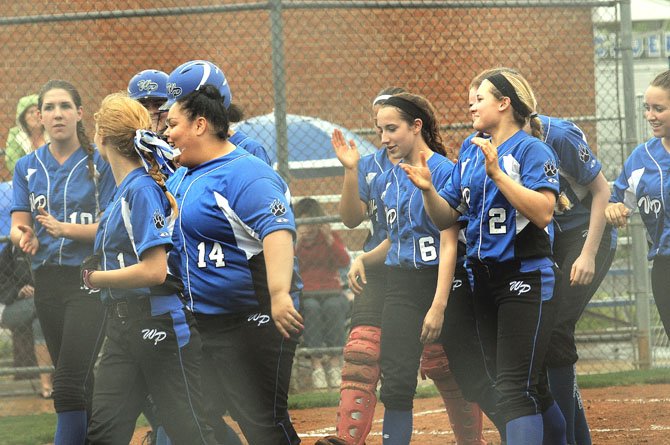 The West Potomac softball team, seen against Edison on March 24, has won nine of its first 10 games. Photo by Louise Krafft.

The West Potomac softball team concluded its appearance at the Madison spring break tournament with three consecutive victories, improving its record to 9-1.

The Wolverines defeated Annandale 10-3 on March 31 and beat Mount Vernon (6-0) and Lee (11-10) on April 2 at Madison. West Potomac started the tournament with a 15-1 home victory against Edison on March 24, and suffered its first loss of the season against Centreville, 9-7 on March 31 at Madison.

West Potomac is averaging better than 11 runs per contest and has scored at least 10 in seven of 10 games.

The Wolverines are 4-0 in the Patriot District and will play at 6:30 p.m. on Wednesday, April 11 at home against defending champion South County. Two days later, West Potomac will travel to face Lake Braddock.

The West Potomac girls’ lacrosse team is off to a 5-0 start, including a 13-12 victory against Annandale in the Patriot District opener on March 28. Jordyn Elliot scored four goals for the Wolverines, while Liz Quin, Emily Hauptle and Madison Condon each had two. Nicole Farino, Annmarie Wood and Karley Zdebski each had one.

Mount Vernon will return to action at 7 p.m. on Tuesday, April 10 at home against Yorktown.